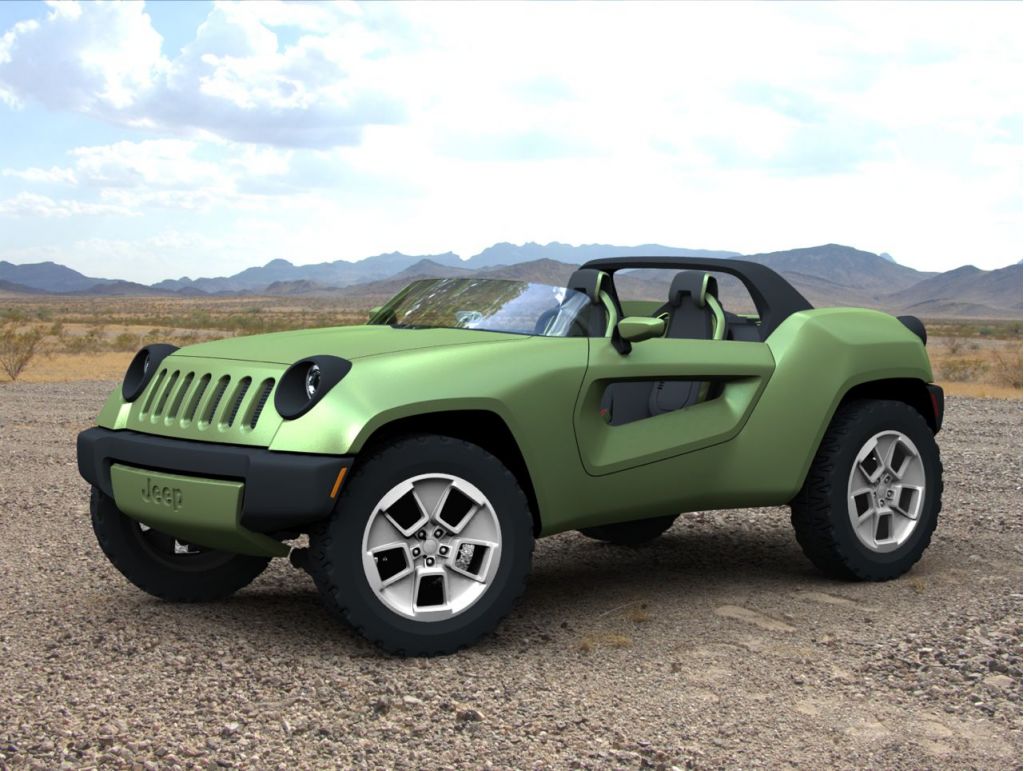 Chrysler rolled out three concepts at the 2008 Detroit auto show, each pairing exciting design and glimpse-of-the-future features with environmental friendliness.

All three deliver power through an electric motor system and advanced, yet-to-be-developed lithium-ion battery pack, but each model has a different type of “range extender for the powertrain” — a gasoline or diesel engine that cycles on only when the battery has little charge remaining.

This modular electric/lithium-ion technology that all three employ is being developed by Chrysler’s new ENV1, an in-house organization at the company that’s focused around developing electric-drive vehicles and advanced-propulsion technologies.

At only 153 inches long (just a few inches longer than the MINI Cooper) and less than 63 inches wide, the Jeep Renegade concept is a little two-seater that could be equally in its place on sand dunes, tight forest trails, or tight city streets. The Renegade, at least visually, looks like a back-to-basics approach, with a cut-down windshield, prominent roll bar, and an easy-to-clean, hose-out interior, and lightweight aluminum construction — along with, of course, good ground clearance and four-wheel drive.

But propulsion is provided by an electric motor system, with regenerative braking much like a hybrid to help increase efficiency in stop-and-go driving. On plugged-in-and-recharged power alone, the Renegade can go about 40 miles; after that, the little 1.5-liter, three-cylinder Bluetec diesel engine kicks in to charge the system and also run the motors, for a total range of about 400 miles. All considering, its powertrain yields a petroleum-equivalent fuel economy of up to 110 mpg, Chrysler says.

The Renegade comes with no roof per se, but it can be equipped with one of many lids depending on the occasion and the cargo to be hauled. For instance if mountain biking the roof would be formed to accommodate two bikes in back. Also, its seats are treated with a waterproof material that’s flexible and soft to the touch. Materials take a decidedly environmental bent, with a soy-based foam used for the seats and doors, and a no-gloss exterior finish that’s actually just molded composite — to avoid the use of paint solvents.