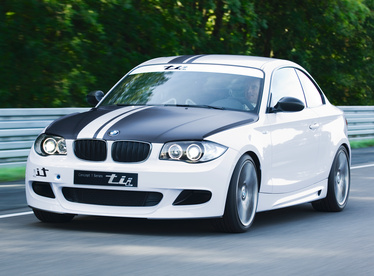 This is the fifth concept car from BMW to appear during 2007. However, calling the 1-Series tii a concept is a stretch. The car looks production ready. Now.

It incorporates the key features of previous racing models on a lightened production 1-Series with its carbon-fiber reinforced components on the engine compartment hood, mirror caps, and the inlays for the front air intakes at the side. A significant reduction (unspecified) of weight versus series production cars is claimed. There are also fins along the hood to optimize the flow of air, a contrasting color scheme on the engine compartment lid, and stripes on the roof of the car and the rear lid in contrasting color. All this is homage to the 2002 tii.

BMW isn’t saying when or where a production version will appear or what the engine will be. It does acknowledge, “the development principles applied more than four decades ago are still most appropriate today in creating sports models.” We agree.