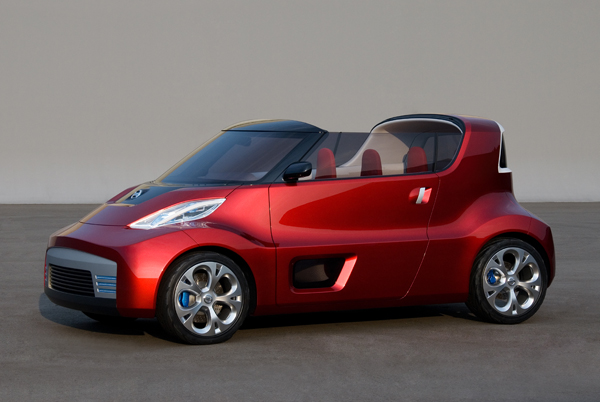 It would appear, by definition, to be a rolling oxymoron. But Nissan’s RD/BX, or “round box,” is an intriguing take on the compact convertible design concept. The overall look is somewhere between a Dustbuster and a smart fortwo, with an angular nose that appears to be sucking itself forward, with a tall and upright rear riding atop flared wheel arches.

Like the smart, this four-seater’s soft top doesn’t open up completely but, rather, retracts into what serves as a rear rollbar. And if you get enough of looking skyward, there are also transparent “road surface windows” that let you watch the road roll by.

Stuck in traffic? No worry. The RD/BX features a “Play Catch” system that allows both the driver and passengers “to share entertainment and driving information,” asserts a Nissan release. There’s a large, touch-screen LCD monitor in the center of the vehicle, and another mounted on the instrument panel. Besides playing games, the monitors can be used to search for shops or restaurants.

The tall body design translates into a surprisingly spacious cabin. Nissan’s seating strategy is a quirky hybrid, using bench-style lower cushions and bucket seat uppers to give each passenger a little breathing space.

The powertrain in the RD/BX features a gasoline direct injection engine, an electronic CVT, and turbocharging to maximize both fuel economy and performance at the same time.

The RD/BX also features a safety-support system that includes a view-around monitor in the dashboard and a distance control assist to help prevent the vehicle from creeping to close to another vehicle.

The basic design is open to enhance the sense of speed that has always made driving fun, Nissan says. The three-part roof can be rolled back by stages or it can be stored in the trunk. The interior of the “Round Box” also features sculpted seats that have clearly been influenced by Nissan's alliance partners at Renault, which developed the Kangoo concept vehicle.