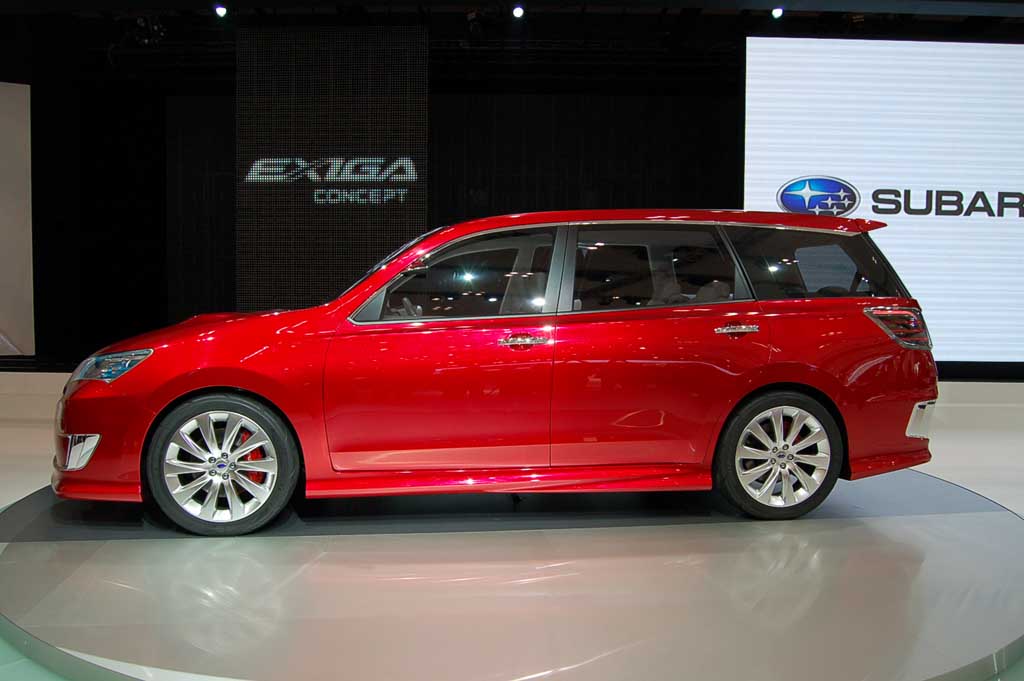 The Tokyo Motor Show is known for its outlandish and often excessive designs, but look closely and you may catch a glimmer of what’s really in store from manufacturers like Subaru. The maker’s Exiga is being billed as a concept, but it has the look of a production-ready model, perhaps a replacement for the current Legacy, we’re wondering?

The official pronouncement is that “the EXIGA Concept is a seven-seater touring wagon, which has achieved a roomy interior that can comfortably accommodate seven adult passengers and also offers exhilarating driving performance.”

The touring wagon is powered by a 2.0-liter turbocharged boxer, or horizontally-opposed, four-cylinder engine that’s mated to a five-speed automatic driving all four wheels.

The show car comes in Candy Red Pearl, but the most distinctive visual image is likely to be the Exiga’s nearly all-glass roof. With its three rows of theater-style seating, the roof means all seven passengers should get a tremendous view of the road, rather than the back of someone’s head. The large glass roof and theater-style seats are said to create an airy, open interior. Subaru says that’s particularly true in the rear, where the third row chairs appeared to be more roomy than many on current production cars.

Of course, if that translates into a view of Tokyo’s endless, elevated highway system, that might get boring in a hurry, so the Exiga is stocked with an assortment of video screens and other high-tech gizmos, the stuff we’ve come to expect on the floor of Makuhari Messe. But the basic shape of this concept seems destined to make the jump to an assembly line sometime soon.