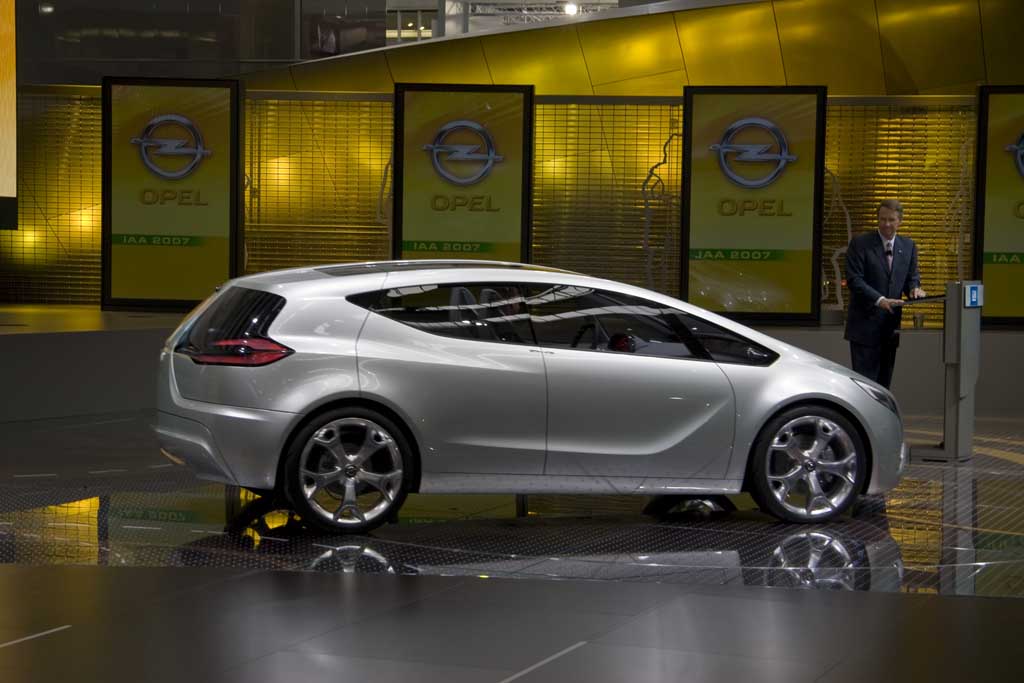 While there are more than enough muscle cars to go around at this year’s show, “green machines” are everywhere, as well. Nowhere was that more apparent than at the General Motors stand, where virtually every new product had an environmental spin, ranging from flex-fuel vehicles to a plug-in hybrid that could become the most fuel-efficient vehicle on European highways.

GM’s Chevrolet Volt was arguably the star of last January’s Detroit auto show. The plug-in hybrid concept could charge up at any electric outlet and handle the typical commute on battery power alone – though its onboard three-cylinder gasoline engine would be able to kick in, functioning as an electric generator for longer drives.

The Opel Flextreme could well grab headlines at the show, as well. The striking four-door shares its technical underpinnings with the Volt as it shares GM’s new eFlex drive system, but Opel’s version uses a diesel, rather than gasoline, engine for back-up power. According to Carl-Peter Forster, president of GM Europe, a production version of Flextreme could handle up to 55 kilometers (about 35 miles) on battery power alone, enough for 75 percent of European commuters. In EV mode, it would put out no emissions of any form, and even over a longer haul, it would emit less than 40 grams of CO2 per km. It would also use less than 1.5 liters of diesel per 100 km, which, if you’re good at math, translates into better than 150 mpg.

If that isn’t enough to catch your eye, the crossover vehicle features the Opel FlexDoor system, an unexpectedly large interior, a split rear hatchback and, in concept form, space below the cargo bed to store two Segway Personal Transporters. There’s no word on whether Opel will translate the Flextreme into production – but GM is promising to deliver a real-world version of the Volt, so considering Europe’s focus on mileage and emissions, one might bet in favor of finding the Flextreme in the lineup as well early in the next decade.

“Sustained growth and profitability,” declared GM Chairman Rick Wagoner, is going to depend on a manufacturer recognizing that it is “neither feasible nor optimal for our industry to rely only on oil.”

GM is clearly not the only automaker taking this to heart, nor is it the only maker pushing into uncharted territory. Since the Volt’s well-covered debut last January, virtually every major maker, and more than a few small ones, has announced interest in the technology, including not only but also the coachbuilder Fisker Automotive, which plans to produce a luxury plug-in, as well as Visionary Vehicles, the stuttering start-up created by long-time automotive entrepreneur Malcolm Bricklin. His original hopes of importing Chinese cars dashed, he is now looking for a source to build a plug-in hybrid design.

Google Studying Plug-Ins by Bengt Halvorson (6/19/2007)
Company’s fleet of plug-ins is up and running.