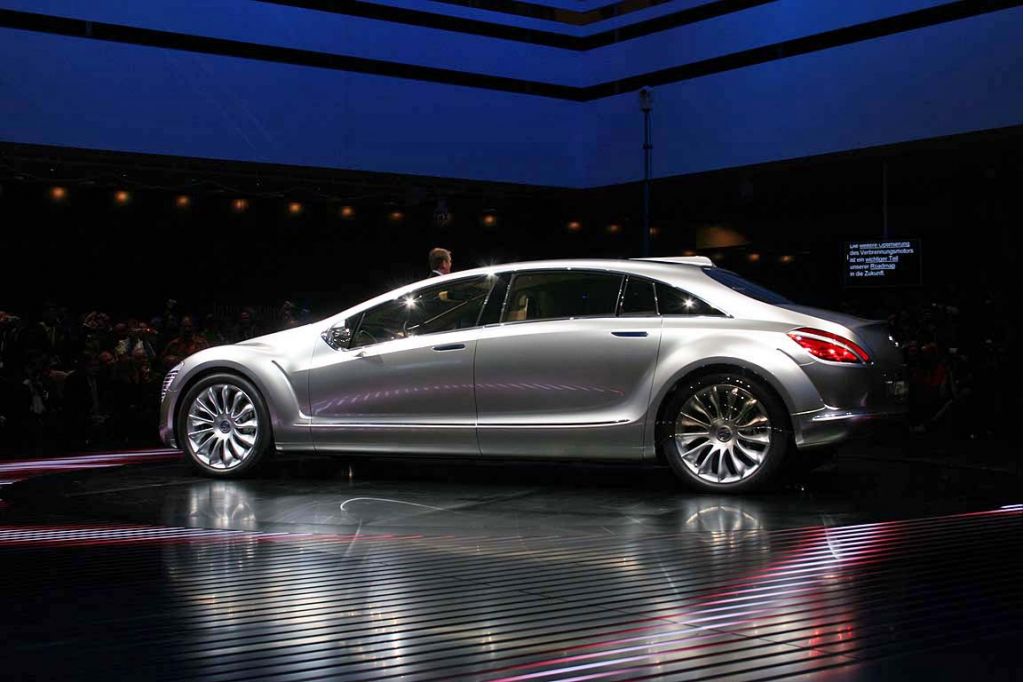 Mercedes-Benz’ display at this week’s Frankfurt auto show will include the F700, a dazzling and dizzying collection of technology bundled into a concept-car body that could be an early preview of the next S-Class sedan.

But the emphasis is distinctly on low consumption and low environmental impact, starting with its experimental engine that combines diesel compression and turbocharging in a gas engine that produces V-6 power — though it’s only a four-cylinder.

The concept’s DiesOtto prototype unit, say its engineers, offers the torque and fuel consumption of a diesel, with the power and emissions quality of gas. Despite its small size of 1.8 liters, it can deliver 238 hp of power. That's more than a standard 3.5-liter V-6 gas engine or a 3.0-liter V-6 diesel. The electric hybrid motors add another 20 horsepower. All told, the drivetrain could propel the F700 to 62 mph in about 7.5 seconds, on its way to a top speed of more than 120 mph — more than useful power, though not quite SLR-speedy.

The DiesOtto is more efficient because it's a smaller, more compact design, and uses two-stage serial turbocharging. Running on gas, it has a spark plug at the top of each cylinder, but they don't fire on every cycle. If the driver accelerates hard they will spark, but if he's being more gentle, ignition of the fuel/air mix is caused by compression — as in a diesel — so the spark isn't needed. Mercedes calls this innovation Homogeneous Charge Compression Ignition (HCCI).

Cost is an issue with the engine — diesel cars are already more expensive because the engines cost more to make. The expensive extra technology involved on the DiesOtto will be an issue vehicle manufacturers will have to address, as GM is also experimenting with a similar concept.

The unusual name, by the way, comes from combining the word “diesel” with the name of Nikolaus Otto, the inventor of the gasoline engine in 1867.

The F700’s drivetrain has its equal in the concept’s technological systems, which use lasers, avatars, and other geek-chic systems to make the car even more luxurious and responsive than today’s full-size Benzes.

The body motions are controlled by a new system dubbed PRE-SCAN. Taking the place of Mercedes’ current Active Body Control system, the new technology is laser-based. Sensors embedded in the concept’s front end scan the surface of the road ahead and transmit information to the car’s computers, which set the hydraulic suspension for the impending jostle. Those laser sensors are flanked by LED headlamps as well.

Inside, the F700’s controls have been built around an interactive system called SERVO-HMI. Mercedes has streamlined the number of controls activated by hand, and has updated today’s COMAND system with presets and clearer menu structures. But the eye-popping addition to the setup promises to be the avatar that the system uses to interact with the driver. The system takes the shape of a young woman, who interacts with the driver to set functions such as navigation destinations. The virtual assistant also controls the car’s phonebook and radio presets.

Sleeping with the fishes?

At 203.5 inches in overall length the concept F700 is just an inch and a half shorter than today’s S-Class. But its wheelbase is 11.2 inches longer — thanks to what Mercedes dubs “Aqua Dynamic” styling. As it has in previous concepts, Benz uses the flow dynamics of fish to dictate the styling of the vehicle, with the added emphasis around the fenders borrowed from today’s S-Class.

The fishlike silhouette, combined with the long wheelbase, creates a dramatically larger interior that enabled designers to pencil in a new seating concept in the rear. Known as REVERSE, the setup uses a rear-hinged right rear door and movable right-rear seat to create a new environment behind the driver and front passenger. The movable seat can be positioned in the traditional spot — or, the front passenger seat can be folded down and the right-rear seat can be rotated so that rear passengers can face each other in conversation. Leather and cork trim dress up the interior.