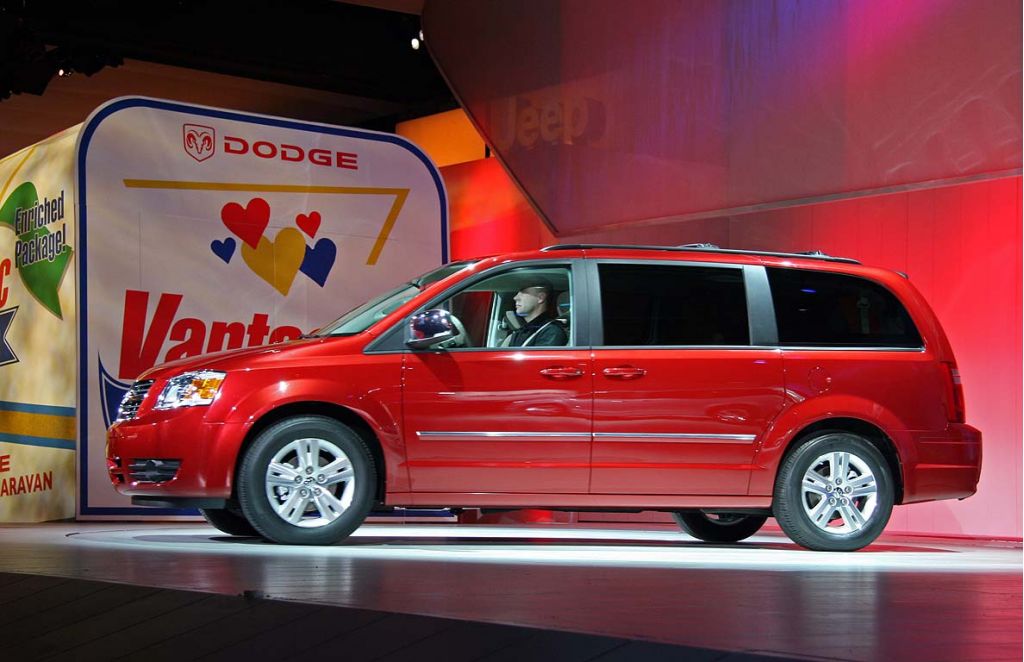 Chrysler pulled the wraps off its next-generation minivans to launch this year’s Detroit Auto Show. First introduced in 1984, Chrysler “soccer mom-mobiles” have remained the industry leaders, year after year, despite steady assaults by its import and domestic competitors.

The 2008 Dodge Caravan and Chrysler Town & Country will go on sale next autumn, offering a variety of new features, including newly-designed “Swivel ‘N Go” seats, which will permit second and third row occupants to face one another. 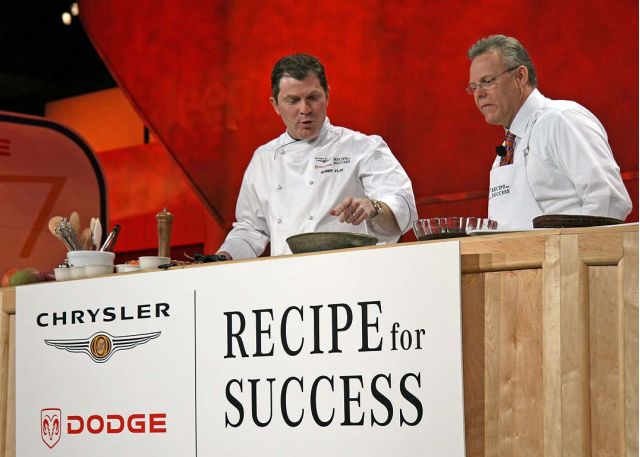 Chrysler, known for the high show business content of its auto show events, didn’t back down this year. To get that message across, the automaker brought in well-known chef Bobby Flay, perhaps best known for his cookbook, Boy Meets Grill, and his shows on the Food Network. With LaSorda’s assistance, Flay cooked up several dishes onstage, prompting the Chrysler CEO to joke that “The kitchen’s been hot enough lately,” a reference to the pressure he’s facing to stanch the company’s mounting financial losses.

As TheCarConnection.com noted in a sneak preview of the new minivans, the ’08 Caravan and Town & Country models will introduce such new features as dual DVD players, permitting two separate discs to be played simultaneously. The second-row windows will now be able to be rolled down, much like a conventional passenger car. And the third-row seats will be able to fold away with the touch of a button.

A sophisticated multimedia system, mounted in the center console, will provide a driver access to not only satellite radio, but also to real-time traffic reports. The system will have built-in Bluetooth technology for hands-free cellular phone service. And an optional camera will be available for use while backing up.

Other safety features on the ’08 minivans will include standard Electronic Stability Program and all-row head curtain airbags that will stay inflated in the event of a rollover.

For ’08, designers tried to better differentiate the Caravan and Town & Country models, though the most distinguishing features are the brand-centric grilles. The new look of the Chrysler model has been heavily influenced by the popular 300C sedan.

Though Chrysler no longer commands a 50-percent share of the minivan market, as it did during much of the last 24 years, it still builds more than one of every three of the people movers sold in the U.S. That’s all the more significant an accomplishment considering the struggle its cross-town rivals have had in the segment. Ford recently announced it would drop out of the minivan market entirely and General Motors may follow that lead, though Chrysler faces tough competition from both Honda, with its Odyssey, and , with its Sienna.

The minivan market has slipped in recent years, but LaSorda said he expects it to stabilize at about 1.1 million units sold annually, making it one of the largest segments in the automotive market.

Preview by Joseph Szczesny (1/4/2007)
Chrysler sticks with the minivan wars.