The Lincoln MKR Concept is poised for a Detroit introduction -- and now, here's what you'll be looking at in January -- and seeing in a showroom sometime in 2008. 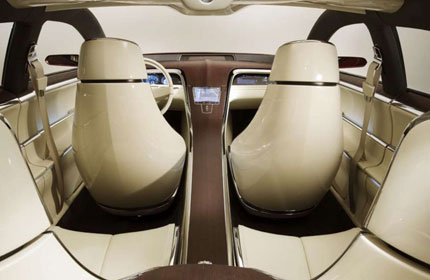 While the official release from Ford had been held under embargo, some publications were granted exclusives on the release prior to the Detroit auto show in January . So like them, we're going to bring you the information early - and bring you more pictures as we can obtain them.

Though it’s officially no more than a concept vehicle, the prototype is very likely to show up in production form before decade’s end, albeit a bit less radical than the prototype. One of the more notable features of the show car is its all-glass roof with a badge etched in. A more conventional roof, albeit with an oversized Panorama roof would be more likely in production.

The outline of the badge can also be found designed into the distinctive brake and gas pedals.

What design chief Peter Horbury calls the “ultimate” would go to rear-drive and all-wheel-drive configurations, something that would make for a much more competitive entry. Under the hood of the show car is one of the most over-the-top engine layouts seen since the era of the muscle car. The prototype features a 3.5-liter twin-turbo V-6, the new Ford TwinForce, which makes 415 hp and 460 lb-ft of torque. The TwinForce, Ford promises, will deliver V-8 power with markedly better fuel economy.

Overall, the look displays ’s new design theme. It’s notably more curvaceous than the slab-sided theme the brand was experimenting with in recent years, but it also harkens back to some distinctive heritage cues, such as the double-wing grille and high beltline.

The MKR sits on a 112.9-inch wheelbase and, at least in show car trim, is shod in 21-inch wheels and tires, with well-displayed Brembo brakes.

Don’t be surprised to see a production version of this sedan hit showrooms for the 2009 model-year.