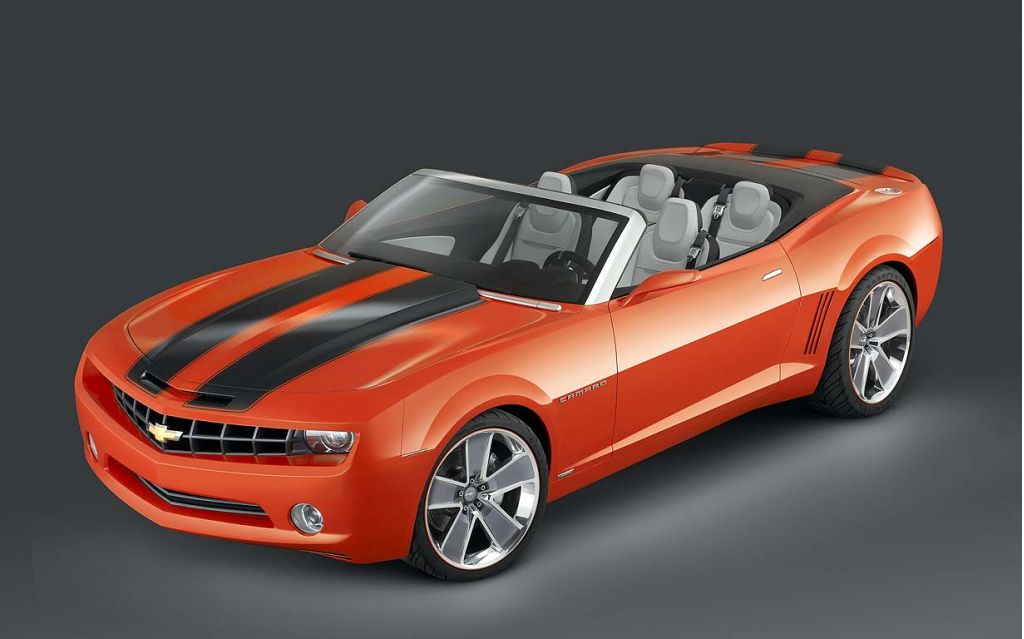 How do you top the biggest hit of last year’s North American International Auto Show? How about by cutting the top off of the Chevrolet Camaro concept car? A ragtop prototype of the hit pony car will be making its official debut at the 2007 Detroit Auto Show, and company officials hint that, as with the coupe, the Camaro cabriolet will soon find its way into the Chevy showroom.

Once one of the country’s most popular muscle cars, the Camaro grew bloated and outdated, ultimately fading into oblivion. But the long-rumored concept car that showed up at ’s Cobo Hall, last January, gave the marque a new lease on life. Lifting just the right amount of retro design cues, it was crisp and curvaceous, with a muscularity that screamed for action.

It didn’t take senior GM managers long to recognize the winner on their hands – quickly approving a production version – nor could they miss, in the words of Ed Welburn, GM’s vice president of global design, that “The best follow-up to last year’s award-winning Camaro concept is a Camaro convertible.”

Minor changes have been made to accommodate the canvas top, such as the front windshield surround and backseat. But overall dimensions are essentially identical to that of the concept Camaro coupe.

The ragtop rides on 21-inch tires, up front, with 22s in back. They’re mounted on deep-dish, five-spoke wheels featuring charcoal center sections with bright outer edges and an orange outline on the wheel edge.

A variety of details underscore the performance heritage of the Camaro convertible, including the rear fender gills, racing-style fuel filler door and the Corvette-derived hood scoop.

GM is being consciously vague about what’s underneath that hood, apparently hoping to save at least a few surprises for the official show debut. They’re hinting, “The Camaro convertible concept is motivated by a torquey V-8 engine that rightly sends power to the rear wheels via a manual transmission.” We’ve got a sneaking suspicion we’ll see a 400-plus horsepower version of a Corvette-derived V-8.

The coupe features four-wheel independent suspension  and four-wheel disc brakes. Going to IRS would be a leg up on Camaro’s arch-rival, the Mustang; Ford beancounters choose to go with a live rear axle in order to hold down costs.

GM has had plenty of decisions dictated by its own, penny-pinching accountants, over the years. And some of those ill-conceived actions were responsible for killing off the Camaro brand for several years. As with Mustang, the General intends to market a variety of versions of the next-generation Camaro, starting with a base, V-6 model and running well up in both horsepower and price. But company officials firmly insist they won’t strip the car down like they might have in the past.

We’ll wait to see, of course, and a good indication will be found in the passenger compartment. Interior design has become the new auto industry battleground, and GM is ramping up spending, on average, several hundred dollars a vehicle on its cabins. The interior of the Camaro concept coupe, with its deep-orange metal accents, was unexpectedly elegant, and the new convertible is even more appealing.

To provide an airy feel, the color theme is light-on-dark. The seats are platinum-on-black suede and leather. The round-gauges-in-square-holes design of the instrument panel is clearly influenced by the original Camaro. Smoked satin aluminum provides the accent with such elements as the vents, seat handles, and seatbelt buckles, while the shifter and pedals have been forged from billet aluminum.

When the Camaro coupe rolled into Cobo last year, heralded by a marching band, it was still the subject of a lot of internal debate at GM. Not so the convertible. With the two-door hardtop on the production schedule for 2009, the automaker has already gone and reserved a place for the ragtop to follow, a matter of months later.

No surprise. It’s easy to imagine the convertible will prove as big a hit this year as the Camaro coupe did in January 2006.