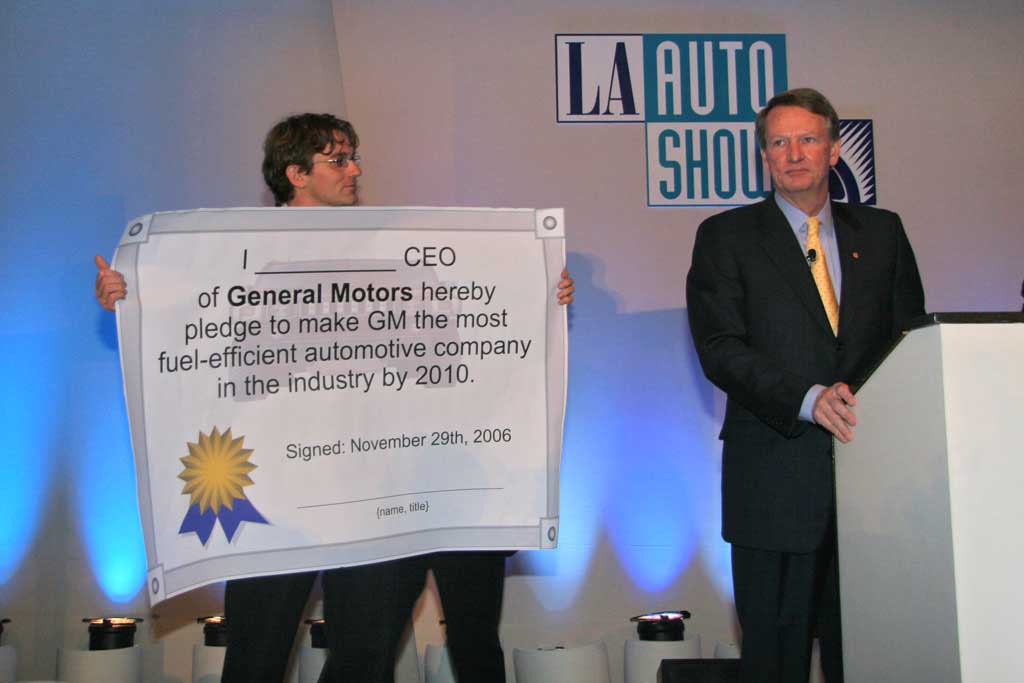 While the public days at the 2006 Los Angeles Auto Show have barely gotten underway, organizers are already declaring the event a success, and even critics agree that the show has come a long way in its effort to gain more credibility.

Organizers concede they were forced to reschedule to November after years of trying to go head-to-head with the bigger North American International Auto Show, in Detroit. “The manufacturers wanted us to move it, the media wanted us to move it,” said the show’s Andy Fugazi. The payoff was significant. By the official count, there were 35 different cars, trucks, concepts, and crossover vehicles unveiled during the show’s two-day press preview this year. That was nearly triple the total at the last show, held in January of this year. As many as 3000 members of the automotive media descended on the for the preview, several times more than before.

Not everything went smoothly. The keynote speech, by General Motors Chairman Rick Wagoner, was disrupted by a pair of environmentalist protestors, who rushed the stage trying to get the CEO to agree to boost mileage. They were hustled from the stage, but only after unfurling a banner demanding that GM agree to become the most fuel-efficient automaker in the business. Meanwhile, members of the media were faced with over a half-dozen competing evening events spread out across metropolitan The city’s notorious traffic made it impossible for journalists to attend more than one or two of the previews.

Nonetheless, the general perception of media and manufacturers alike was that the newly reinvented L.A. Auto Show was a success. More important, the revitalized show provides a critical path to a huge market, said GM’s CEO, Wagoner. “This is where the future is,” he explained, noting that accounts for about ten percent of all car sales. More significantly, as “the creative capital” of the country, it influences everything from design to demand for cleaner and more fuel-efficient vehicles.

Will the rescheduled show replace its longtime rival, ’s NAIAS, as the premier North American auto show? Unlikely, even the show’s spokesman, Barry Toepke, cautioned. But there appear to be a number of reasons why it’s likely to maintain or even build momentum.

“ has simply become too crowded,” said a senior executive, asking not to be identified by name. “It’s too easy for anything but a major announcement to get lost in the crowd” when, as is the norm in , manufacturers are rolling out 60 to 70 new products and concept vehicles.

also provides a much-needed outlet closer to the beginning of the new model year, several industry officials also noted. So even if it remains second to , appears to be positioned to become a must-see show in the years ahead.