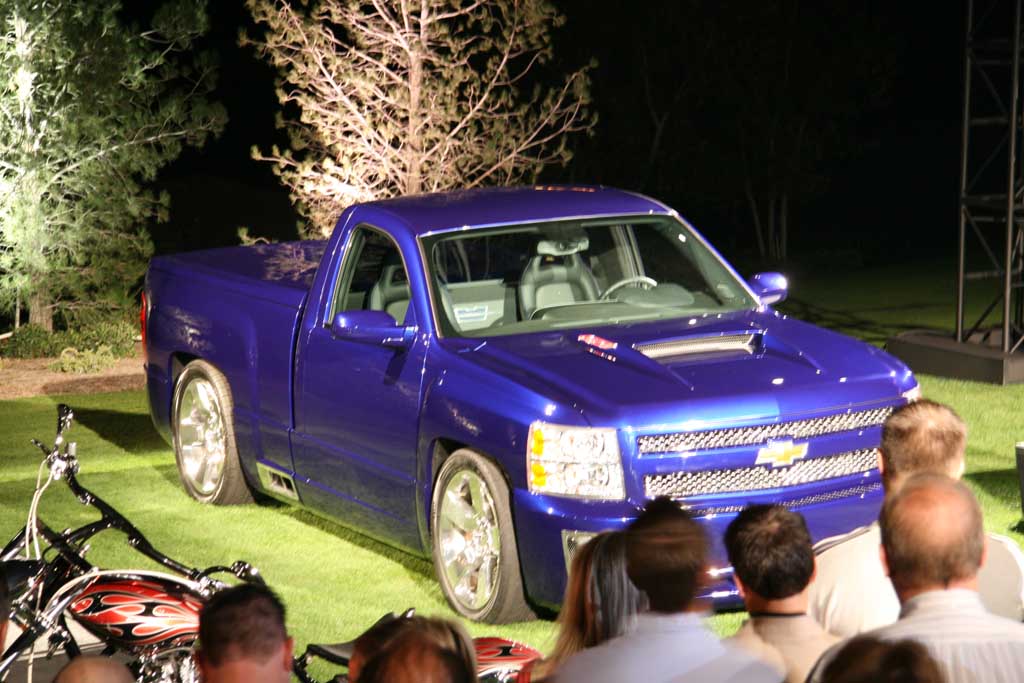 by TCC Team (10/30/2006)
All our coverage from the Las Vegas aftermarket extravaganza.

Even before its new Silverado pickup rolls into dealer showrooms, Chevrolet has given a hint of what could follow, with a trio of concept trucks developed for the annual SEMA aftermarket show, in.

Starting with a standard, the full-size Silverado, Chevrolet engineers worked with racer Dale Earnhardt Jr. to develop what he described as the “ultimate off-road truck.” Sounding the concept vehicle’s big horn, derived from an 18-wheel semi, Earnhardt joked that, “When you go over the top, you gotta go all the way.”

The Earnhardt Silverado – known to Chevrolet insiders as “Big Red” – features a 6.2-liter V-8, pumping out 380 horsepower. The metallic red body features oversized fender wells, with plenty of room for the humongous 37-inch, off-road tires mounted on one-off, custom billet aluminum wheels. Under the skin, the suspension has been beefed up for some serious trail driving with such things as dual front shocks, the young racer explained.

A huge spare tire takes up much of the cargo bed, and can be easily seen because there’s no tailgate. “It improves fuel economy,” Earnhardt declared with a straight face. Should you not be sure who’s behind the wheel, there’s a big number “8” mounted on the grille, which smoothly integrates a trick brush guard.

While many concept vehicles are developed just for display, Earnhardt stressed that “I’m driving it. It’s not just for show.”

A second Silverado concept was developed by the hosts of Orange County Choppers, Paul Teutel Sr. and Jr., and featured many of the touches that can be found in the motorcycles built on the popular TV show.

They took the “wicked vehicle approach,” suggested GM design director John Cafaro. The body of the long-wheelbase OCC Silverado is high-gloss black, with the windows tinted a mirrored orange. The low profile mirrors look they could have been snatched from a Harley. Under the hood, there’s a big 427 V-8 derived from the Corvette Z06, but thanks to a motorcycle-style exhaust system, the OCC Silverado sounds more like a chopper than a truck when fired up.

The Teutel team spent as much time inside as out, crafting a highly stylized alternative to the conventional Chevy truck’s interior, with a heavy use of metallic finishes. Real carbon fiber wraps the grab handles.

Chevy’s third SEMA concept is also the one with the brightest future. The 427 Silverado is, sources tell TheCarConnection, a good indication of what’s to come in the upcoming Silverado SS performance truck. Underneath a menacing hood scoop derived from a mid-‘60s Corvette, is a 7.0-liter LS7 V-8 making 505 horsepower and 470 lb-ft of torque. “It brings the 427 name into the current day,” said the division’s general manager, Ed Peper, adding that it shows “how we can add even more muscle to Chevrolet’s truck.”

There are massive, 16-inch, six-rotor Baer six-piston brakes, ensuring the rear-drive 427 stops as quick as it starts up. The laser blue metallic paint scheme covers a variety of unique body panels, some of which could wind up in the Chevrolet catalog, while others very well may show up in production on the SS, hinted Cafaro.

The truck boasts racing seats and a three-point harness derived from the current ’Vette.

While Chevy officials declined to discuss specific plans for the 427, don’t be surprised to see the production SS reach dealers within the next year.