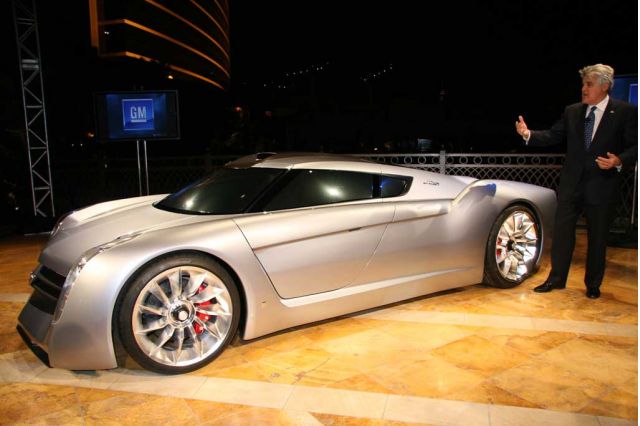 Jay Leno can find the humor in almost everything, including zealous animal rights activists and even the fuel-sipping Toyota Prius, but when it comes to the environment, he’s not joking around. Or so said the lantern-jawed comic and TV host, with a momentarily straight face as he helped pull the wraps off his new EcoJet supercar on Monday night.

Developed and built largely at Leno’s “garage,” as part of an unusual collaboration with General Motors, the ultra-light two-seater houses a biodiesel-powered turbojet engine.

“I wanted to build a modern car that didn’t run on fossil fuel,” explained Leno, “but (also) didn’t drive like a Prius.”

The project got underway last Spring, when Leno approached Ed Welburn, GM’s global design director, with a sketch he’d developed on the back of a napkin. Working with Frank Saucedo, the head of the automaker’s advanced West Coast design studio, a series of preliminary sketches followed, with the eventual design heavily influenced by the turbine-powered Firebird concept vehicle that highlighted GM’s Autorama displays back in the 1960s.

Eventually, as the effort became serious, Welburn authorized the development of a full-size clay model. As the design was locked down, work began at one of the hangar-sized garages Leno uses to house his massive automotive collection at the airport.

After nearly eight months, a partially-completed version of the EcoJet was readied for a surprise unveiling at the annual Special Equipment Marketers Association, or SEMA, show, in . The aftermarket event brings together executives from all walks of the auto industry, as well as an array of automotive media.

While the EcoJet revealed on Monday was not ready to roll on its own, it hinted at what will come. Under a skin of carbon fiber and Lexan – a strong but lightweight alternative to window glass – the one-of-a-kind sports car features an aluminum chassis developed specially by Alcoa. The metal maker also developed the EcoJet’s striking wheels. The car’s suspension, brakes, and transaxle were derived from the latest version of the Chevrolet Corvette, the so-called C6.

Even the paint was developed specially, Leno explained, by the German supplier, BASF, using an eco-friendly waterborne method. 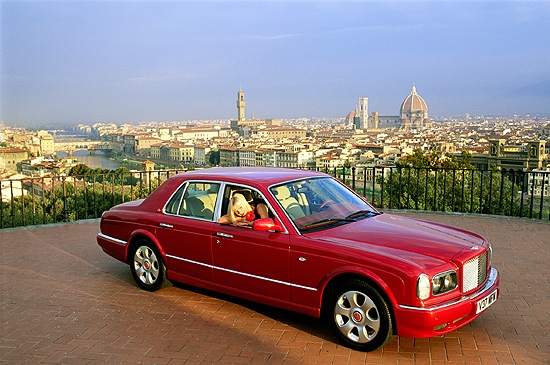 With the Arnage Red Label and other semi-new products, Bentley is forging ahead toward a future without Rolls-Royce.

The heart of the EcoJet, however, is its Honeywll LT1 jet engine. According to the comic, it will produce 650 horsepower and 580 pound-feet of torque, once the car’s twin fuel tanks are filled with bio-diesel.

Asked if he intended to drive the EcoJet every day, Leno joked that it would probably only go on the road, “during harvest season.” But, in fact, bio-diesel, which can be derived from food scraps and other renewable sources, is becoming increasingly common around the country.

Environmentalists might not give the EcoJet an entirely green seal of approval. Though it won’t rely on fossil fuels, Leno acknowledged it is likely to get just six to 10 miles per gallon on bio-diesel.

Leno and Welburn admitted they weren’t sure how well the 2400-pound EcoJet will perform, once they’re done with the car. Earlier turbine-powered concept vehicles, such as the Firebird, were slow off the line, requiring the engine to “spool” up for a few seconds, much like a jet aircraft. But Leno suggested that the newer Honeywell powerplant, combined with the EcoJet’s low mass, should get things moving fast.

Welburn hinted the EcoJet may wind up on the auto-show circuit before the running version finally finds a way back to the Leno garage.

When asked to put a price tag on the development of EcoJet, the GM design director would only say “there is some serious money in it,” with Leno, as well as Alcoa contributing to the project’s cost.

“I’m not sure. I’m afraid my wife would find out,” said Leno, who admits to owning at least 100 different automobiles. “I am president of the more money than brains club,” he joked.