Big Three Gain in Harbour Productivity Report's Big Three is closing the quality and productivity gap, according to the 2006 Harbour Report, an oft-quoted measure of manufacturing efficiency. But continued to lag behind the best of the Japanese, especially Nissan, which was the most efficient automaker in last year, requiring just 28.46 hours of labor to produce its cars, trucks and crossovers. Looking solely at assembly plants, Ford Motor Co.'s Atlanta Assembly Plant was the productivity king, requiring just 15.37 hours of direct and indirect labor to produce a Taurus sedan. Unfortunately, workers there won't be celebrating much, as Ford recently announced plans to close the plant. General Motors, meanwhile, is closing the second-ranked assembly plant, in Oshawa, Ont. "Productivity is only one of….hundreds of criteria" used to decide which Big Three plants stay open at a time of sharp cutbacks," explained Harbour Consulting President Ron Harbour. Perhaps the biggest lesson from the new report? Efforts to boost quality actually improve productivity, rather than adding costs, said Harbour.Read more on the Harbour report Wagoner Shucks Off Fuel-Econ CriticismGeneral Motors chairman and chief executive officer Richard Wagoner dismissed some recent criticism of GM's record on fuel economy, noting that GM has steadily improved the fuel efficiency of its vehicles.Thomas Friedman, a best-selling author and New York Times columnist, has criticized a new GM promotion offering to guarantee that buyers of certain GM vehicles would not have to pay more than $1.99 per gallon through rebates and credits to a debit card. Friedman says the plan shows that GM is doing little to promote the use of more efficient vehicles.In rebuttal, Wagoner said GM's new front-drive, six-speed transmissions that the company will offer on a large number of models this fall will deliver a 4-percent gain in fuel economy over the automaker's current generation of four-speed automatics. The company's first hybrid, the Saturn Vue Green Line, also will go on sale this summer, he added. "This is further evidence of how GM is continuing to invest in technology to improve fuel economy," Wagoner said during a visit to a GM transmission plant in , where he announced a commitment of $332 million to the plant. The investment is specifically earmarked for building six-speed transmissions for front wheel-drive passenger cars such as the Saturn Aura and Pontiac G6 as well as GM's new family of crossover vehicles, which includes the Saturn Outlook, Buick Enclave and GMC Acadia.Earlier in the week, GM had announced it was spending $125 million to expand another transmission plant in  The expansion is part of GM's efforts to offer more six-speed rear- and all-wheel-drive automatic transmissions for cars, trucks and sport-utility vehicles. GM should be able to build as many as 3 million of the more efficient six-speed transmissions by 2010, he said.In the past, six-cylinder transmissions were typically found on expensive luxury cars. One of GM's strengths, however, is that it can take technology like the six-speed and use it in a wide array of models, Wagoner said. Wagoner said GM already makes more vehicles that get 30 miles per gallon or more than any other automaker."These new six-speeds and technologies will enhance that position," he said.The latest investments bring GM's total spending on six-speed automatic transmissions at its U.S. operations to $1.7 billion since 2003, including $1.2 billion in Michigan alone, said Thomas Stephens, the head of GM's Powertrain Group.-Joe Szczesny  Acura Staying Out of 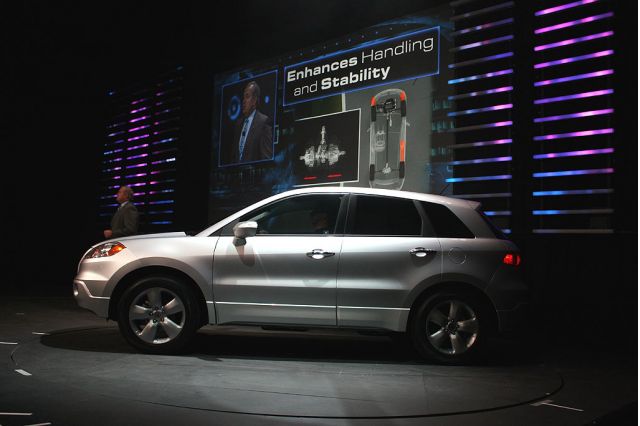 While it's begun fleshing out its lineup with vehicles like the new RDX crossover, Honda's upscale Acura division won't be reaching for the stars. One category that the company vows it won't enter is that of the premium SUV, in the mold of the Lexus LX 470 or Land Rover Range Rover. However, Honda/Acura VP Dan Bonawitz does admit that Acura is "rounding out the brand and will continue rounding out the brand."While rumors continue to flow that Acura will drop its RSX sports coupe, the RDX is going on sale now for a base price just north of $30,000. The American-built crossover, Acura's first turbocharged vehicle and its first compact SUV, is part of a niche that Acura expects will grow by 500 percent in the next five years.Is Inrix Navigation's "Killer App?" by TCC Team (5/29/2006)Satellite navigation company promises to predict the future.  Loses $192 Million in AprilBankrupt auto supplier reported on Wednesday that it lost $192 million in April, as part of a monthly filing required by the U.S. Bankruptcy Court. The supplier's net sales reached $1.36 billion, with $761 million coming from General Motors. also reported that, as a result of its contentious bankruptcy filing, it had spent $70 million in legal and professional fees since it filed Chapter 11 on Oct. 8.GM Brass Predict Delphi Settlement by Joseph Szczesny (5/15/2006)Negotiations at a standstill as the court holds the next key. GM Names NA PresidentGeneral Motors Corp. announced Troy Clarke has been appointed GM North America president and GM group vice president. GM Chairman and CEO Rick Wagoner made the announcement. The appointment is effective July 1. Additionally, it was announced that John Devine, currently GM vice chairman, will retire June 1. Devine, 62, announced he would retire from GM in December, but did not set a departure date until now. Clarke, who had been president of GM Asia Pacific since 2004, will work closely with Wagoner in implementing the GMNA turnaround plan, the company said in a release. He will also handle day-to-day operations of GM's North American organization. Wagoner has been leading GMNA since April 2005 to develop and drive the region's turnaround strategy. "While much work remains to be done, we have reached several significant milestones in our turnaround plan over the past year," Wagoner said in a statement. "This is the right time to turn the region's day-to-day operations over to , who has the experience and skills to help lead the GMNA team as it continues this unprecedented restructuring. has a track record of success in general management, manufacturing and labor relations in the and globally, which will be invaluable in his new assignment." Wagoner said he and his senior leadership team will continue to be actively involved in executing the next key steps in the GMNA turnaround plan, including a successful resolution of the Delphi reorganization; completion of the accelerated attrition and capacity-reduction programs, and achievement of the $7 billion structural cost-reduction target; flawless launches of key new cars, trucks and advanced technologies; and ongoing refinement and acceleration of GM's brand and product-focused marketing strategy. David "Nick" Reilly, a GM vice president and president and CEO of GM Daewoo Auto & Technology Co. in , will replace Clarke as president of GM Asia Pacific and will become a GM group vice president, also effective July 1. Reilly also will succeed Clarke as chairman of the GMDAT Board of Directors. A replacement for Reilly as CEO of GMDAT will be announced at a later date. - Mike Strong  Going Rear-Drive?Seeking to breathe some life into its ailing brand, General Motors may be nearing a decision to convert the franchise's lineup into an exclusive lineup of rear-drive cars. Automotive News reports that under the plan, still being discussed within the company, would leave without any trucks or front-drive vehicles in its lineup after a transition period of a few years. The transition could take up to five years, but could get its kick-off at January's auto show, where will show a rear-drive sedan concept that is said to predict its future design direction. That vehicle could effectively replace the mid-size Grand Prix sedan; GM is said to be debating whether to also add a Firebird sportscar or to simply plan ahead for a new GTO.GM's New Lansing Plant Gears Up (5/29/2006)New generation of crossovers begin to roll. Michelin Dies in Boating AccidentEdouard Michelin, the 42-year-old chief executive of the tiremaker bearing his family's name, died in a boating accident off the coast of last Friday. Considered one of Europe's most influential auto industry figures, Michelin had led a turnaround at the tiremaker that boosted sales and increased spending on tire technology development and increasingly, environmental technology. Michelin, a father of six, became a managing partner of the company at 28 years old and had worked at the company's offices before becoming CEO at the age of 36.Racing News and Notes, May 29 (5/29/2006)Racing Results: May 26-29, 2006 (5/29/2006)Hornish wins Indy thriller.
Tags:
April auto December Expensive Fuel July May Industry News
2021
The Car Connection
See the winners »
2021
The Car Connection
See The Winner and Nominees »