Porsche Bringing Base Cayman This Summer 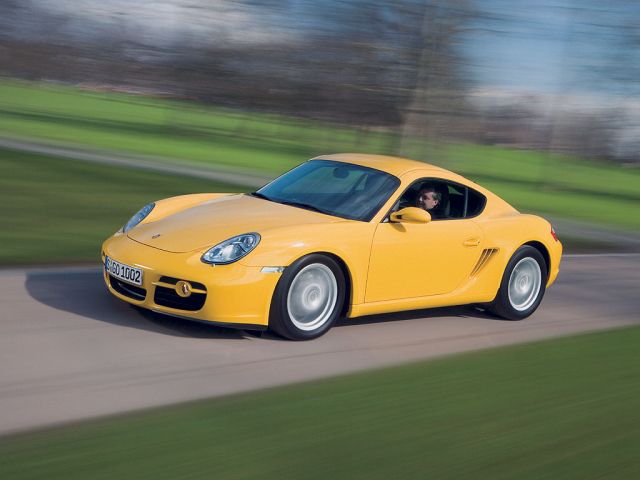 Porsche's Cayman S will get a cheaper cousin in the summer, when the German automaker drops the Cayman on the general public. Powering the base Cayman is a 2.7-liter six-cylinder with 245 horsepower and 201 pound-feet of torque. Porsche promises 0 to 60 times of 5.8 seconds and a top speed of 160 mph, while delivering 23/32 mpg in the EPA cycle. A five-speed manual is standard; a five-speed Tiptronic is an option, and a six-speed manual option comes bundled with Porsche's Active Suspension Management system. The $49,400 Cayman also comes with 17-inch wheels, a CD player, leather trim and side-impact airbags.2006 Porsche Cayman S by TCC Team (9/26/2005)Almost a 911?  GM Offers Gas-Price Cap for CA, FL BuyersBuyers of select GM vehicles in the states of and can get their fuel costs capped through a unique new promotion the company has begun. Buyers can cap their gas costs at $1.99, GM says; the automaker will estimate fuel usage each month and will credit consumers the difference in gas costs based on AAA fuel-cost guidelines. GM says there will be no mileage limits on the program but buyers must sign up for OnStar service to receive the giveback. GM estimates a buyer of a 2007 Chevy Tahoe could get a monthly rebate on a special GM debit card of more than $100 through the program. The vehicles included in the program include the 2006 and 2007 Chevrolet Tahoe and Suburban (half-ton models only), Impala, and ; GMC Yukon and XL (half-ton models only); HUMMER H2 and H3; Cadillac SRX; Pontiac Grand Prix; and Buick Lucerne. buyers are eligible if they purchase the 2006 and 2007 Chevrolet Impala and , Pontiac Grand Prix, or Buick LaCrosse.TheCarConnection Drives Chevy's Camaro by TCC Team (5/22/2006) concept inching closer to production.  MINI Hits the Road to MINI USA will be taking the long way from the summer's classic-car draws out west to the east. The BMW brand will sponsor a MINI Takes the States rally, which will begin at the annual Monterey Historic Automobile Races and will end at the Lime Rock Vintage Festival in Connecticut. The two-week-long, itty-bitty fiesta will celebrate MINI's appearance as the featured marque at and the recent launches of the supercharged and John Cooper Works MINIs. Participants are being asked to register online at www.minitakesthestates.com, and will be provided with wristbands for themselves and a co-pilot; the wristbands get them into free concerts, special events along the way and, no doubt, cutesy tschotschkes as well.2006 Geneva Show, Part V by TCC Team (3/1/2006)Saab Aero-X, MINI Cooper S JCW, BMW Z4 M Coupe. Hyundai SUV Won't Be Earlier this month, TheCarConnection reported that the name of the new full-size Hyundai SUV would be . Sources now tell TCC that the name was one of four tested for the new vehicle but that the ute will not be tagged , although the name may be used on a future vehicle, potentially a new Kia model.Spy Shots: 2008 Hyundai Mesa by Brenda Priddy (5/15/2006)'s biggest yet.   VW Prices Eos from About $28,000The new four-seat Volkswagen Eos hardtop convertible will arrive this fall as a 2007 model priced from $27,990, not including destination. The convertible comes in base form with VW's 200-hp, 2.0-liter turbo four; the 250-hp, 3.2-liter V-6 version has a base price of $36,850. Standard equipment on both models includes stability control, front and side airbags, air conditioning, a panoramic sunroof, and power windows, locks and mirrors. Options include a six-speed Tiptronic automatic, leather seating, electronic climate control; the V-6 can also be had with wood trim, rain-sensing wipers, and satellite radio.   Range Rover Gets Upgrades for '07Land Rover's Range Rover model gets a series of improvements for the 2007 model year, including upgrades to its interior and its off-road technology. Inside, the RR's cabin is fitted with more wood trim on the door panels, revised storage space and repositioned gearshift and parking-brake controls. New front seats offer optional cool-air circulation along with their standard heating elements. Side airbags have been moved to the seats as well. Land Rover's Terrain Response system appears on the Range Rover for 2007 as well, while an electronic rear differential is now available or standard on supercharged versions.  Porsche Promises Panamera from And in another bit of good news for the German auto industry, Porsche says it will build the new four-door Panamera sport sedan in . The town also is home to the brand's sport-ute, as well as the Volkswagen Touareg and Audi Q7. Engines will be assembled in , though, and the car's painted body will come from the massive Volkswagen complex in . Porsche says the Panamera will go on sale in 2009 and will lead to the creation of 600 new jobs in the plant alone.   Honda Links Brains to RobotsFirst, there was Asimo, the Honda robot that could. Now Honda says it's developed a way for humans to control robot's moves with…brainwaves. Working with ATR Computational Neuroscience Laboratories, Honda says its method involves using a magnetic resonance imaging scanner (an MRI) and relaying the signals to a robot through a computer. Honda says the technology could eventually replaced keyboards, cell phones, and help people with spinal cord injuries communicate and use robots to perform functions for them. Honda demonstrated its technology in with a robotic hand that responded to instructions to make a fist, spread its fingers and make a V sign.
Tags:
auto Body Fuel May road Industry News
2022
The Car Connection
See the winners »
2022
The Car Connection
See The Winner and Nominees »