Memorial Day Car Travel Rising, But Not By MuchThe roads will still be jammed on Memorial Day weekend, but AAA says that the increase in travel on the holiday will be the smallest in four years. The travel association puts the blame squarely on gas prices, which have risen by more than a third since last year's summer kick-off weekend. AAA expects 31.4 million Americans to hit the road for 50 miles or more over the Memorial Day weekend, up less than a percent. The average price of a gallon of gas nationwide, the AAA estimates, is $2.93. Honda Lays Out New Production, Hybrid PlansHonda Motor Co. will expand its production footprint in the and around the world, and will design a new hybrid-only vehicle that will replace its Insight two-seater to challenge the Toyota Prius in the battle for green-minded consumers.In a press conference held in Tokyo and a follow-up for American reporters, Honda confirmed reports earlier this week that it will build its sixth North American plant somewhere in the U.S. Midwest for a production start at the end of the decade. The investment of about $400 million dollars likely will be made near existing facilities; the states of , , and are said to be pitching the Japanese automaker to locate the new plant within their borders. The facility will employ 1500 workers and will have a capacity of about 200,000 units initially when it opens late in 2008.Honda is also planning its first new assembly plant in in three decades. It will also expand an engine plant in and a transmission plant in the state of . And facilities in and will get more capacity by the end of the decade.The new hybrid model will be designed and built in and will effectively replace the Insight, which led Honda's foray into hybrid vehicles in the late 1990s and has remained essentially unchanged since then. Honda's sales chief Dick Colliver confirmed that Honda would stop building Insights in September. The new hybrid will be ready for sale in 2009 and will be priced below the existing Civic, but will not be a hybrid version of the new Fit subcompact.Honda also confirmed that it will begin selling diesel-powered vehicles in the And lastly, the company told reporters that its goal will be to boost its corporate average fuel economy to 30.6 miles per gallon for its car lineup-and to boost sales by a third by the year 2010.2006 Hybrid Buyers' Guide by TCC Team (5/1/2006)What to look for in the new wave of fuel-sippers. GM Discharges HUMMER H1 from Active Duty 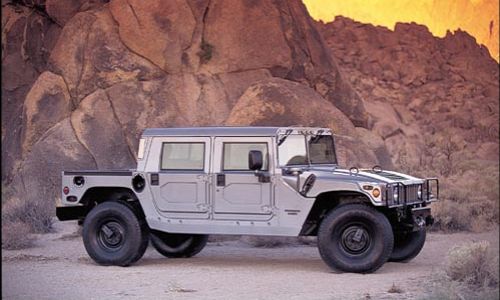 Age and rising gas prices have finally caught up with the HUMMER H1 as General Motors confirmed last week it will drop the rugged, off-road vehicle from its model line at the end of 2006 model run this summer.  Martin Walsh, HUMMER's general manager, said in a statement that after 14 years, GM has decided concentrate its resources on smaller, more up-to-date vehicles. "It's a reflection of where we're going with the HUMMER brand," he said of the decision. "The HUMMER DNA still resides in the Humvee. It will always be the core from where we come," he said.Nick Richards, HUMMER spokesman, also said that GM has other HUMMER models under development that will help the brand expand in the future. Officials from AM General, the Indiana-based maker of military vehicles, also said it needed to make more room in its factory to build more vehicles for the U.S. Army. Even environmentalists discovered a soft spot for the vehicle after the GM announcement, noting the HUMMER, which became something of status symbol after the Gulf War in the 1990s, has served as perfect symbol of gas-guzzling excess. The H1, which was developed back in the 1980s as light truck to carry troops and replace the old M1A1 Jeep, gets about 10 miles per gallon and that seemed to be a generous estimate - but most HUMMER owners didn't worry about pump prices.GM has sold about 12,000 H1s, which carried a price tag of roughly $140,000. The company only has sold 100 so far this year. The other models in the HUMMER line, the H2 and the H3, are doing better and Richards noted that GM expects to begin building the H3 in later this year for distribution to markets in Europe, Asia, and the . The goal is to make HUMMER into a global brand, he said. -Joe Szczesny AutoPacific Names 2006 Satisfaction WinnersStep aside, Mick and Keith: AutoPacific says that once again, Lexus is giving the most satisfaction in the new-car business. AutoPacific released the results of its annual Vehicle Satisfaction Award study on Wednesday, and Lexus again topped the rankings among consumers. The single most pleasing truck to buyers was the Lincoln Navigator, while the Hyundai Azera climbed to the top of the car list. Among automakers, Honda topped four categories, GM and Ford three each, and Nissan, Hyundai and Mitsubishi scored a pair each. The rankings broke down as follows:     BRAND:                               Lexus     PASSENGER CARS:    Premium Luxury Car                Lexus LS    Entry Luxury Car             Cadillac CTS    Luxury/Large Car            Hyundai Azera    Premium Mid-Size Car      Volkswagen Passat    Mid-Size Car                   Mercury     Image Compact Car         MINI Cooper    Compact Car                  Honda Civic    Sports Car                      Chevrolet Corvette    Sporty Car                     Acura RSX     LIGHT TRUCKS:    Large Light-Duty Pickup    Nissan Titan    Large Heavy-Duty Pickup Chevrolet Silverado HD    Sport Utility Truck           Honda Ridgeline    Compact Pickup              Mitsubishi Raider    Luxury Sport Utility          Navigator    Large Sport Utility           Nissan Armada    Premium Mid-Size SUV     Mitsubishi Endeavor    Mid-Size Sport Utility        Hyundai     Compact Sport Utility       Suzuki Grand Vitara    Minivan                          Honda Odyssey  Texas Raising Limits to 80 MPH?The is threatening to break the 75-mph stranglehold on speed limits, according to a report from Today. The nation's daily newspaper-their tagline, not ours-says that the state Department of Transportation is proposing that sections of Interstate 10 and 20 in West Texas notch up their speed limits to 80 mph. The move, of course, has safety mavens in a tizzy: a spokesperson for the Insurance Institute for Highway Safety says it comes down to "trading lives for faster travel times." The state's DOT says that most drivers already are traveling near the proposed speed limit, however. The paper recalls that the last 80-mph speed limit signs in would have been found in 1974, before 55 mph became the law of the land.
Tags:
Engine Fuel road Selling Tokyo 2006 Car Safety HUMMER H1 News HUMMER News News
2021
The Car Connection
See the winners »
2021
The Car Connection
See The Winner and Nominees »