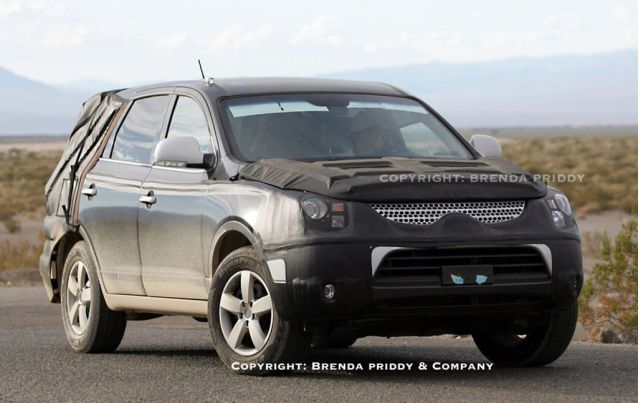 Hyundai has put a name to the largest vehicle in their lineup - the Mesa SUV. Just a few inches shorter than Chevrolet's Tahoe, the upscale will be powered by a 3.8-liter V-6, with a horsepower rating estimated at 270 to 280 hp. Three rows of seating, luxury amenities, and an all-wheel-drive option will top off this newest entry from . -Brenda PriddySee more Mesa pictures inside TheCarConnection Spy Shots: 2010 Audi A8 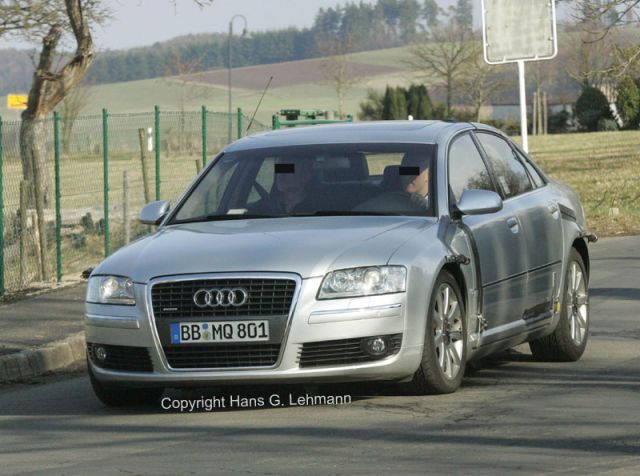 Audi is busy developing the next A8, which is scheduled to be released at the end of 2009. The first prototype mules have been sighted near the Nürburgring. Photos show the test car is about three inches longer than the current A8.See more Audi A8 photos inside TheCarConnection  Spy Shots: 2008 Chrysler Minivan 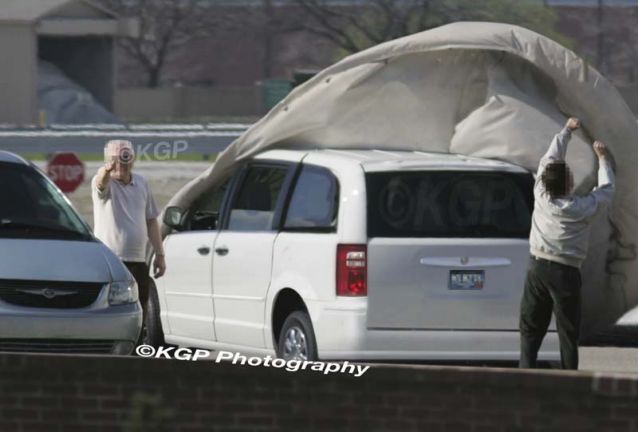 When you're on the prowl for prototypes, a flapping car cover is one thing that definitely catches your eye. That's exactly what we saw as we were checking up on a DaimlerChrysler pilot production facility - two engineers placing a cover on a remarkably well-finished prototype for Chrysler's next minivan.We managed to snap this photo just before they got the cover in place. This is the first time we have seen a minivan test vehicle without the heavy front and rear camouflage and the grid-like body tape that usually covers every inch of most Dodge and Chrysler prototypes. We have applied some minor computer retouching to clean up the paint, and finalize the trim and taillights, but 98 percent of the prototype in this photo is exactly as it was photographed. That means these are the first and only shots to show the true roofline, tailgate, and rear-pillar design of the DaimlerChrysler's new minivan. These shots also show the first visual proof that the new vans will get roll-down windows on its sliding doors to match its competitors from Mazda, Honda, and .The new Chrysler minivans will be less jellybean-shaped, with a more upright D-pillar. The rear tailgate and the backlight are more squared off than the current van, with at least a hint of the Chrysler 300C and Dodge Magnum creeping into the new design. -KGP Photography  BMW Drops Mille Miglia Concept (Like It's Hot)A rainy-day project that will never see a production line unless it's towed across one, the BMW Mille Miglia Concept Coupe is nonetheless a beautiful piece. Based on the M Z4 Coupe, the MM Concept is an homage to BMW's 1940 M328 Touring Coupe, which took the 1940 Mille by more than 15 minutes ahead of the second-place car, BMW reminds us. The two-seat Concept Coupe blends "traditional heritage and modern technology," BMW adds, as it stretches the Z4 M Coupe by about nine inches, and boosts its 343-hp engine slightly in output. Look for more on the auto-show circuit - and see more pictures inside TheCarConnection today.More photos of the BMW Mille Miglia concept Saturn Ion Being Replaced by Astra; Spring Hill Questions?General Motors' plans for a Saturn Ion replacement had hit a snag, but as is becoming common, the automaker's Opel division is coming in to pinch-hit. Saturn is already drawing on the European division for the new Aura sedan, a version of the Opel Vectra. And now Saturn's Ion will be replaced by a rebadged Opel Astra, beginning late next year. Automotive News reports that GM had planned a new entry-level Saturn named Evoke, which would have been based on the Chevrolet Cobalt, but that plan has been scuttled in favor of sharing the Astra with European customers. The Ion goes out of production this fall, and the Astra replacement won't be ready for some six to eight months later, other sources indicate. Saturn may keep the Astra nameplate and will certainly raise the price of the new vehicle above the Ion's sticker price of about $12,500 base.The production moves indicate that the future of the Spring Hill, Tenn., plant where Saturn was born may be in flux. The plant currently builds the Saturn Vue and Ion. While the Ion will be sourced from a European plant, the Vue is also expected to be derived from an Opel design - the Antara seen at auto shows earlier this year, and reinterpreted as the Saturn PreVue at the New York Auto Show. TheCarConnection's sources indicate the next Vue will be built at GM's Ramos Arizpe plant, late of the Pontiac Aztek, leaving the Spring Hill plant as yet unassigned for new products. GM has announced it will close a raft of plants in the as it downsizes and cuts 30,000 jobs but Spring Hill has not been named to the list for closure.TheCarConnection drives the 2007 Saturn Sky  BMW Planning "RFK" Crossover?The auto scribes at 's Auto Bild report that BMW is eyeing Mercedes' R-Class with some envy, and are working toward their own crossover vehicle under the development code RFK. The weekly car magazine reports this week that the "room function concept" is derived from both the 5-Series and X5, and will enter production in 2008. The new crossover could arrive in with the current 3.0-liter in-line six and a 375-hp V-8 engine, but an M edition is a distinct possibility. There's no word on where the RFK might be produced. Porsche Carrera GT Ends ProductionShed a tear for its slippery ceramic clutch: the Porsche Carrera GT has finished its brief stint in production. The last two-seat supercar was built on Saturday after more than 1200 were sold worldwide, including more than 600 in the . The Carrera GT sported a 5.7-liter V-10 engine with 605 hp, the aforementioned ceramic clutch, and a lever-action suspension as well as a composite body. Porsche promised acceleration to 60 mph in less than 3.9 seconds and a top speed of 205 mph. If you still want yours, be prepared to pay more than the sticker price of $440,000 for a used copy on eBay.Take a spin in the Carrera GT War of Sexes Moves to Lube RackCar care is for guys, questions are for women? Toss that tired stereotype down the environmentally conscientious drain. A new survey taken by the slick folks at Jiffy Lube says that guys aren't giving gals the best advice on car care, despite a majority of both sexes believing men know more on the subject. Two-thirds of men gave the wrong answer when asked where tire-inflation guidelines are printed on a car, versus 45 percent of women (hint: it's usually on a sticker in the door jamb). Similar ratios of men to women thought that switching to synthetic oil gave them more time between oil changes - a wrong assumption, the oil-change specialists say. And, it turns out, women polled knew just as much about replacing wiper blades and how underinflated tires can sap gas mileage as men.
Tags:
auto Body Engine May Paint News
2022
The Car Connection
See the winners »
2022
The Car Connection
See The Winner and Nominees »