Gas Prices Continue to RiseGas prices have become a major topic of conversation across the country as the two-month-long rise at the pumps has set motorists reaching for their wallets and politicians hunting for scapegoats. The national average for regular self-serve gasoline last week was $2.927 a gallon - 10.2 cents higher than the previous week. But how are gas prices affecting motorists' mental health? TheCarConnection has the latest on rising prices:Gas Prices Keep Rising (4/30/2006)Where will it stop? Nobody knows. Lexus prices ES350 from $33,170 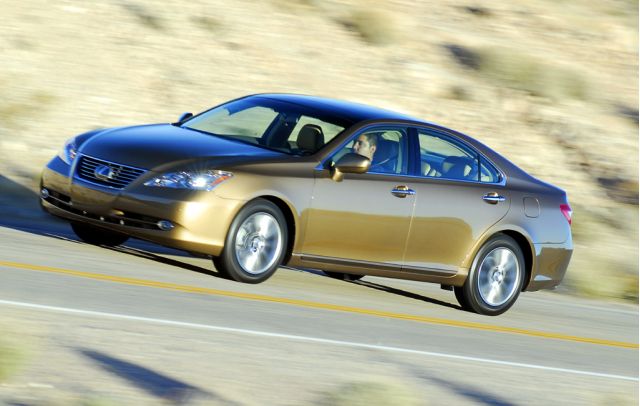 The new ES350 from Lexus will be priced from $33,170 when it goes on sale later in the spring. The new five-passenger luxury sedan sports a 272-horsepower V-6 engine and a six-speed automatic transmission; together Lexus says they push the ES to 60 mph in 6.8 seconds. promises 21 mpg city, 30 mpg highway for the ES350, and installs eight airbags in each model, along with traction and stability control.TCC drives the Lexus ES350 Ten States To Sue Over New CAFE LevelsA group of states will sue the federal government, charging that President Bush's proposed increases in fuel-economy standards don't go far enough in increasing gas mileage. The New York Times reports that the ten states - California, New York, Connecticut, Maine, Massachusetts, New Jersey, New Mexico, Oregon, Rhode Island, and Vermont - will sue, contending that the government has not fully accounted for the environmental impact of gas consumption in revising fuel-economy figures. The lawsuit is a direct challenge to federal standards that are already being challenged on other levels: is trying to set new emissions rules that would effectively require automakers to boost mileage, a move that the National Highway Traffic Safety Administration (NHTSA) is fighting, along with automakers. The Bush Administration has announced plans to raise truck fuel economy to 24 miles per gallon by 2011 and to set truck fuel-economy standards by size class as well.Gas prices still rising Hybrid Registrations Up AgainMarket researchers at R.L. Polk & Co. reported Thursday that hybrid vehicle registrations in the more than doubled in 2005, rising 139 percent to just under 200,000 vehicles for the year. That number is still only about 1 percent of the annual U.S. vehicle sales total, but Polk notes that the market for hybrids has grown exponentially since 2000, when only Honda and Toyota were selling gas-electric vehicles in the U.S. Polk's analysts have backed off from predictions that hybrids would make up as much as 35 percent of all sales by 2015, but note that a slew of new hybrid models could boost registrations again next year. Toyota Motor Corp. accounted for about 70 percent of all hybrid sales in 2005, with the Prius grabbing 53 percent of all hybrid sales. Hagerty Ranks Top Ten Driving PeevesMemorial Day is around the corner-but as the folks at Hagerty Insurance are reminding us this week, there's probably someone on the cell phone or eating at the wheel of the car in front of you, before you even get to the corner. How did they know? Through a survey on their Web site. And the results won't surprise many people - the top ten driving peeves in the unscientific poll were the following:1.  Distracted drivers talking on cell phones (Motor Mouths)2.  Slow drivers in the fast lane (Turtle Racers)3.  Pushy drivers who tailgate (Piggybackers)4.  Drivers who weave through traffic to gain one or two car lengths  (Wacky Weavers)5.  Obnoxious drivers who speed up to keep you from changing lanes (Gap Snatchers)6.  Hasty drivers who change lanes without signaling (Space Invaders)7.  Road Rage (Road Ragers)8.  Motorcyclists who race down the middle of a lane, between cars (Speed Racers)9.  Women applying makeup and men shaving (Driving Divas)10. Drivers who leave their turn signal on for miles (Morse Coders)Read more about the survey at the Hagerty Web site, www.hagerty.com.
Tags:
Driving Engine Fuel road Selling Car Safety News
2022
The Car Connection
See the winners »
2022
The Car Connection
See The Winner and Nominees »