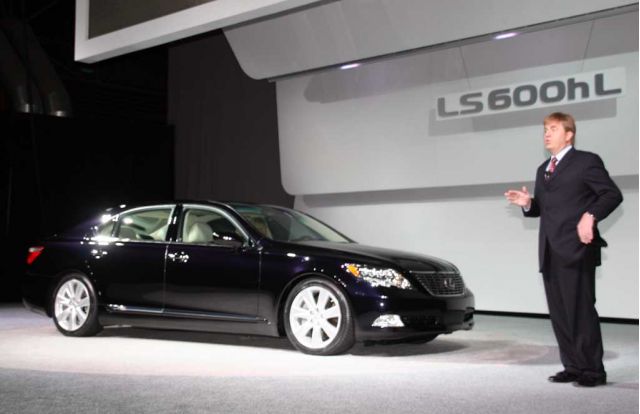 Lexus continued to redefine the hybrid on Wednesday, as it rolled out the LS600h, the world’s first V-8 gasoline-electric vehicle. The sedan starts with a 5.0-liter V-8 mated to the newly-renamed system. With its two-stage torque converter and CVT, the package pumps power to all four wheels. A new, larger battery pack will store more energy than prior Lexus models, which should improve both performance and mileage. Boasting more than 430 horsepower out of its dual powertrain, the LS600h “will deliver power and performance on par with a V-12, while also delivering fuel economy on a par with the best V-8s,” declared the division’s general manager, Bob Carter. While precise specifications have yet to be finalized, Lexus tech specialist David Hermance hinted that the sedan will launch from 0-60 in “the low fives,” compared to the high-five-second range for the “base” LS460.

Carter called the hybrid LS Lexus’ “ultimate flagship.” That means it will be heavily loaded up with features such as LED headlamps — an industry first — and the Advanced Pre-Collision System. The technology uses a mix of radar sensors and two forward-facing cameras to detect an imminent collision. A third camera mounted on the steering wheel watches to see if the driver is aware of the situation. Pre-Collision can, among other things, sound a warning, automatically apply the brakes, and adjust steering settings to make it easier to avoid a collision. The LS600h will also offer a system that can automatically park the sedan, with minimal driver intervention. Only the long-wheelbase version of the hybrid will be sold in the , providing rear passengers with an extra five inches of legroom and even an optional massaging footrest. Sales should launch by early spring 2007, and Carter said he expects the LS600h to account for about 10 to 15 percent of overall LS-series sales. 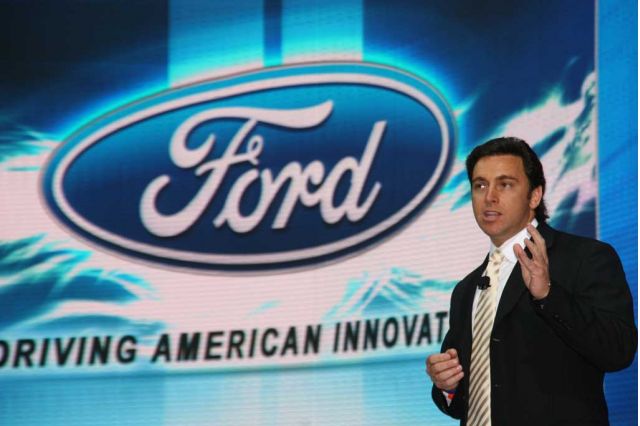 Ford plans to beef up its performance portfolio, Mark Fields, the automaker’s President of the , told a New York Auto Show audience on Wednesday. Central to the strategy is a renewed emphasis on the SVT line, which had been neglected in recent years. “The plan is to offer one performance car and one truck, going forward,” Fields explained, with the pair likely to generate from 5000 to 10,000 annual sales. A version of the Mustang and another SVT makeover of the F-Series pickup will be the latest offerings. Then there’ll be “personalized performance,” allowing customers to buy from a broad catalog of performance parts and accessories. The third leg of Ford’s performance strategy is the Ford Racing unit. 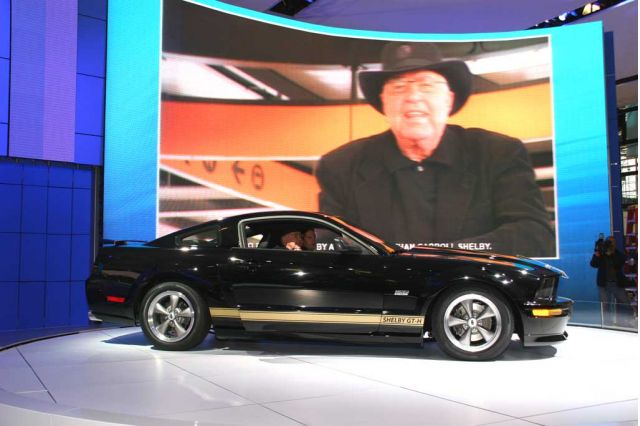 To mark the 40th anniversary of the classic rent-a-car, Ford announced the limited rollout of the Mustang Shelby GT-H. The 1965-66 muscle car produced by Ford and Carroll Shelby was offered through Hertz rental outlets for $17 a day and 17 cents a mile. Today, surviving models are among the most prized classics from the muscle car era. Clearly, Ford hopes history will repeat itself with the 500 GT-H coupes that plans to customize out of his plant near . The Hertz-branded Mustang boasts 325 horsepower, compared to the original rental’s 306. It will feature a special scoop hood, side scoops, custom fascia, and the black body will be offset by gold Hertz stripes. Ford officials hope the GT-H will continue building momentum for the already popular Mustang, and possibly blaze the path for other limited-production Mustangs. According to , the concept for the pony car spinoff was conceived and executed in a rapid-fire 90 days. 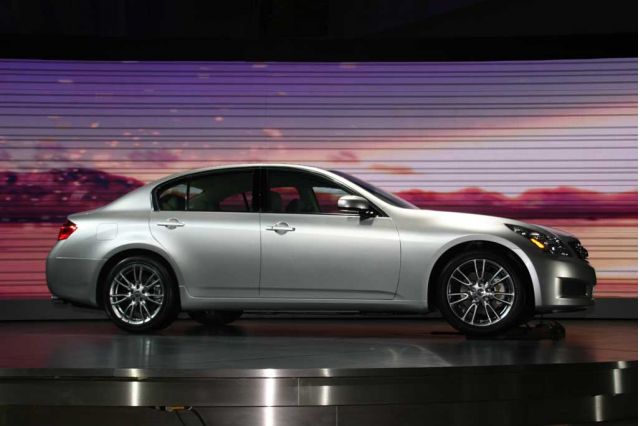 It’s already the most popular model in the Infiniti lineup, and Nissan’s luxury division is expecting to gain even more ground with the roll-out of the 2007 G35 sports sedan. “The design of the original G signaled the design direction for the Infiniti models that followed,” explained Nissan CEO Carlos Ghosn. Expect the new G to continue blazing a path. The ’07 features an upgraded, engine expected to pump out at least 300 horsepower. It will be offered with an automatic, though an optional six-speed manual will be available as well, along with “intelligent” all-wheel drive. The 2007 G35 will boast a variety of new features, including Active Cruise Control and XM with a built-in navigation system capable of warning about traffic jams. Expect the new car to well exceed the 40,000 sales the G35 logged last year, suggested Infiniti General Manager Mark Igo. And he believes all the new features should increase the car’s appeal to women, in particular.
Tags:
auto Body Engine Fuel New York Auto Show Rental 2006 Auto Shows Ford Mustang News Ford News Industry
2022
The Car Connection
See the winners »
2022
The Car Connection
See The Winner and Nominees »