Chrysler's new Patriot opens its charge on the auto show this week-but will the Patriot do to Jeep's bottom end what the Commander did to its top? Find out what the Patriot brings to the party this week at the Javits center and stay tuned all week for more news from the Big Apple:

The United Auto Workers is holding off on scheduling a strike vote among workers employed by Delphi Corp. as it tries to develop a strategy for fighting the rising demands for concessions. And the union's running into complications in its tough-guy strategy, including the retirements of several key negotiators.

What's the next step for the UAW?

DaimlerChrysler AG's top brass has never been big fans of hybrid vehicles, but the public's generally favorable perception of hybrids has given the green machines an important boost. And that's why the Chrysler Group confirmed last week it plans to offer a hybrid version of the Dodge Durango starting in 2008.

Why do GM and BMW care about the Durango Hybrid?

's luxury car market has long been a closed club - as Cadillac has repeatedly learned during a series of failed efforts to crack the continental code. But now Cadillac is trying again with the new Saab-derived BLS. Whether the BLS will be treated as an intriguing new option or dismissed as little more than a poseur remains to be seen, but there's little doubt that Caddy's dreams of global growth will rise or fall on the little sedan's success.

The cost of gasoline increased sharply across the country last week as seasonal changes and uncertainty over supply drove up pump prices, observers said. The national average for regular self-serve gasoline is $2.60 a gallon, nine cents higher than last week.

"We're in the time of year when steep price increases are common, but this year prices are being boosted by speculation about whether there will be sufficient gasoline supplies for later in the year," said Auto Club spokesperson Carol Thorp. "It may be several weeks before a clear picture develops on the nation's gasoline production, but in the meantime, prices could climb to near $3 per gallon."

The same pattern prevailed in , where statewide average price for a gallon of regular self-serve jumped 11 cents in one week to $2.59, according to AAA Texas' Weekend Gas Watch. -Joseph Szczesny

GM officials have confirmed the automaker was preparing to reduce production at its assembly complex in , this summer. The Lordstown plant now builds the Chevrolet Cobalt, which is selling well, noted GM spokesman Dan Flores. Cobalt sales increased 45 percent in March.

GM, however, wanted to make sure the pace of production was sustainable, said. "We don't really need three shifts but we need more than two shifts," he said.

The solution was to eliminate the third shift and increase the rate of production from 53 to 62 units per hour on the remaining two shifts, he said. Daily production in Lordstown will drop from 1300 units to about 1000 units, said. He also said GM isn't certain yet how many of approximately 1100 employees now assigned to the third shift will idled by the change. Some workers will be added to the first and second shifts to handle the increase in line speed while other employees will accept the buyout being offered blue-collar workers near retirement. -Joe Szczesny

"We believe that GM could surprise the Street when they report (first-quarter) earnings, as a result of benefits from GM's new pricing strategy, volume/mix benefits from ramp-up of the GMT-900 SUVs, and an accounting benefit from the Jobs Bank charge.

"We would caution investors from drawing conclusions from the (first-quarter) numbers, as they may include several anomalies," the research note added. "But we are maintaining our 25 cents per share loss estimate for the full year," said.

The Deutsche Bank report also noted that there's a growing risk GM might have to trim production in few months. "Despite the strong production quarter, GM's market share continues to disappoint. GM's sales to retail customers declined nine percent in the quarter, despite the new SUVs. An escalation of gas prices this summer could put GM's new product plan to the test, the report added. -Joseph Szczesny

Chairman of Hyundai Returns to

Chung Mong-koo, the Chairman of Hyundai Motor, returned to on early Saturday as prosecutors speed up their investigation into the suspicions that the country's leading automaker created slush funds to bribe government officials.

Chung's return from the came after his son Chung Eui-sun, Kia Motors president, was barred from leaving the country.

Chung Mong-koo, 68, left for the on Sunday in a sudden move that many think is aimed at avoiding the investigation.

His sudden departure to the made prosecutors reportedly angry as they were considering questioning the two Chungs. -Peter Chang

Show: Choose One, Please
1725 votes have been cast 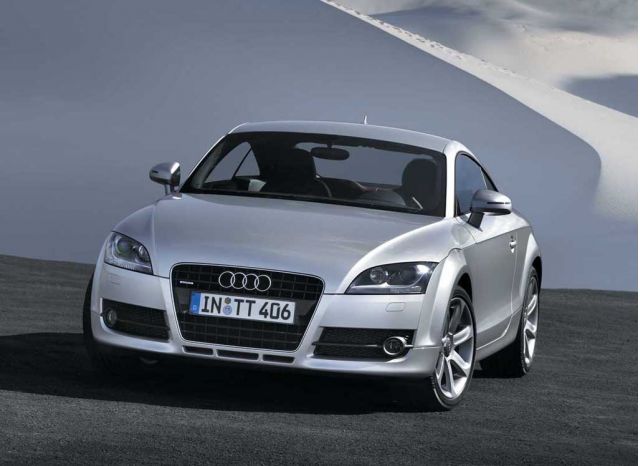 Audi's new TT took to the airwaves this past week, getting a jump on most of the new machines coming to the auto show and simultaneously shedding its Art Deco influences. That leaves the next to our hotel and our editor's wardrobe as the only remaining 1930s influences at TheCarConnection.

Jeep lobs a Patriot missile at the Kia Sportage this week . Stay tuned for the inevitable New York Times piece claiming the company had been planning the launch since the day Dieter Zetsche took office.

It's bedtime at Ford, what with the arrival of the new Sport Trac, minus the familiar Explorer prefix. We're assuming that the 4.5-foot cargo box just didn't have the room for the Explorer tag any more. Either that or that Ford is consciously moving itself away from that nameplate's lead-shoes sales effect.

Dodge's Durango gets a hybrid powertrain mated to its HEMI engine for the 2008 model year. We don't know about you, but the new ad catchphrase, "That thing got a nickel-metal-hydride battery?" doesn't sound like a Clio winner to us.

Cadillac has a shot at Euro credibility with the new BLS. With a turbodiesel engine, compact proportions and a steep pricetag, we're predicting the French will love it in true contrarian fashion.

This week's peak-oil update: some scientists still think the world is running out of oil. For accuracy's sake, we'll just leave the headline running for the next 20 years since it's changed so little in the past 30.

And finally this week, former Sheryl Crow-lovin' cyclist Lance Armstrong will pilot the pace car at the Indy 500. Given his tendency to toss away things of incredible talent and beauty, we'd suggest hanging around after the he pulls back in the pits. (Do your Sir Mix-A-Lot and pull in quick to retrieve 'em.)