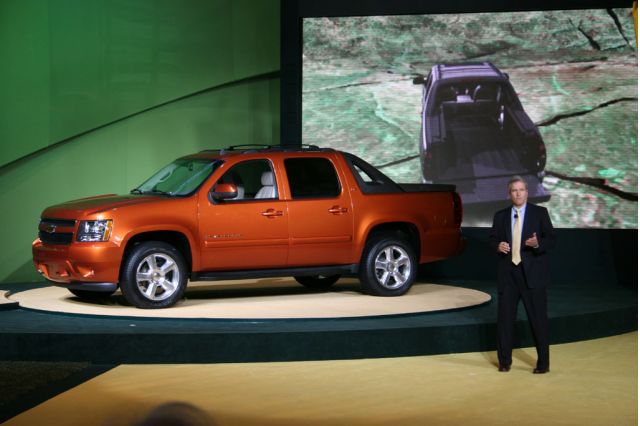 The second-generation Chevrolet Avalanche-which the GM brand calls the "industry's most flexible utility vehicle" - will start from $32,490. Chevrolet will offer three trim levels on the new four-door pickup, with the midlevel LT starting at $33,170. The top-line LTZ will be priced at $39,905. Four-wheel-drive versions will be priced at $35,490 for the base version, $36,170 for the LT and $42,905 for the LTZ. All versions available at launch will be powered by Chevy's 5.3-liter V-8, which features cylinder-deactivation technology. The Avalanche also will be offered with E85 flex-fuel capability.

Joe Eberhardt, Chrysler Group executive vice president in charge of sales and marketing, said Tuesday that the new Compass will give Jeep a strong entry in the small sport-utility vehicle segment, which is expected to expand rapidly in next few years. Sales in the segment passed 300,000 units in 2005 and could easily triple to 900,000 by the end of the decade, added Eberhardt.

"The segment is going to grow exponentially," noted Eberhardt, adding the Compass also is expected to attract younger consumers looking for an affordable vehicle, and women. The Compass, while it represents a departure from Jeep's traditional emphasis on off-road prowess, also takes the Jeep line into new territory, Eberhardt added.

"I think if we had changed the traditional Jeep, there would have been a problem," because it would have compromised Jeep's traditional appeal, he said. The Compass, which is built on the same assembly line in as the Dodge Caliber passenger car, takes Jeep into an entirely new segment, Eberhardt said.

Chrysler representatives also pointed out that the Compass will still the most off-road capable vehicle in is competitive set, which includes vehicles such as the RAV4, Kia Sportage, Saturn Vue and Honda CR-V. To make sure the Compass could go off-road, the underbody sits a full inch higher than that of the Caliber, said Michael Berube, senior manager for Jeep Marketing. The fuel line also has been  tucked up in the body and the seating position in the Compass is two inches higher than in the Caliber, he added.

Eberhardt also emphasized that the 13-percent increase in the Chrysler Group's passenger car sales was no fluke, with the entry of the Caliber into the passenger car segment in a big way. Moreover, the group's passenger cars now sell with few incentives and have strong residuals, he noted. However, all manufacturers are offering substantial incentives in the pickup truck and SUV segments. Honda, for example, usually offers nominal incentives, roughly $200, on its vehicles but it has been forced to offer hundreds of dollars in incentives on the Ridgeline pickup truck, Eberhardt noted.-Joe Szczesny

Kia Rondo Coming to the 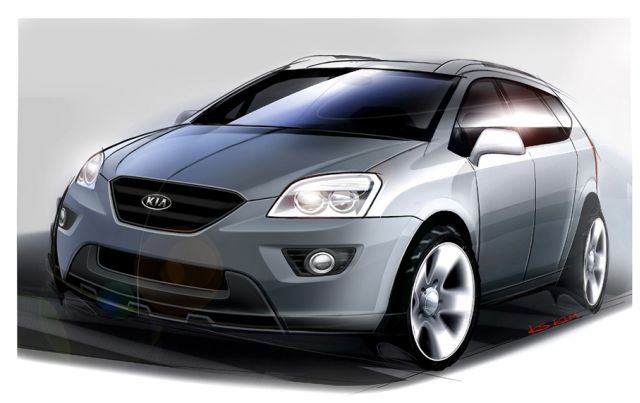 The Kia Carens crossover vehicle is set to be redesigned - and the new version will be sold in the as the Rondo. Kia confirmed the addition to its lineup last week accompanied by this sketch. The vehicle will make its world debut at the auto show on May 25. The Korean automaker promises the new Carens/Rondo will be longer, wider, and taller than the model it replaces, with seating for seven and flat-folding capability for flexibility.

The good Vibes are leaving , although one will stick with the GM brand through at least the 2007 model year. Reuters reports that is dropping the GT and all-wheel-drive versions of the nifty Vibe hatchback from its lineup following the current model year. Slow sales and expensive refits to bring the engine up to new emissions standards have been cited as the reasons for the move. The news service adds that may bring back the performance and AWD versions in a next-generation car. The Vibe is built in GM's joint-venture NUMMI plant in , , which it shares with .

All Ford Dealers to Get SVTs When Goes on

When Ford rolls out its high-powered Shelby GT500 this summer, it will, for the first time, let all of its 3777 U.S, Ford Division dealers sell all vehicles badged as Special Vehicle Team (SVT) cars. In disclosing the change in a dealer-wide e-mail last week, Ford scrapped a process of limiting SVT vehicle sales to selected dealers. Only about 600 Ford dealers were franchised to sell all three SVT vehicles - Focus, Mustang, and the F-150 Lightning. Another 700 were certified for the Focus SVT alone.

The Mustang is the only survivor of the first SVT group. The Focus was discontinued in 2004, and plans to replace the Lightning with the Sport Trac Adrenalin were canceled as part of Ford's new "Way Forward" turnaround plan. A total of 144,994 SVT vehicles have been sold since the SVT program began in 1992.

Ford has not identified what additional products could be added to the SVT portfolio, beyond the Mustang and the Shelby GT500. Approximately 7200 SVT Mustangs have been sold each model year. "This will further strengthen the Ford brand by enabling us to drive more showroom traffic," said Darryl Hazel, president of Ford's customer service division. -

The Detroit News reports that Ford's efforts to develop a rival to Chrysler Group's HEMI engine could be revived. The so-called "Hurricane" engine has been put back into development by Ford Americas president Mark Fields as a means of keeping the company's F-Series truck atop its class. The Hurricane project had been cut in Ford's massive budget slashing last year; the News says the plan now recognizes the need to stay competitive with power offerings not only from Chrysler, but now from and Nissan as well. The project will likely get a new name, given the intense storms that battered the Gulf coast last year.