Jim Padilla plans to step down as president and chief operating officer of the Ford Motor Co., effective July 1, the automaker announced late Thursday. Padilla said he had decided the time was right to end a 40-year career with the automaker.
Find out more about Ford's plans to succeed Padilla

Miller Says GM Is the Key

The automaker, Miller noted, has already booked $5.5 billion to cover the anticipated cost of a bailout. GM recently unveiled a proposal to buy out thousands of workers and bring still more back to the automaker's own plants. But that proposal has not secured a settlement, especially now with asking that the judge in its bankruptcy case to toss out its current labor agreement. If approved, that would slash wages and eliminate thousands of jobs.

"We're broke," said Miller, insisting that only GM can ante up what it will take to satisfy the UAW and 's other unions. But with the automaker facing its own troubles, "It's a question," said Miller, "of whether they can afford it."

Despite the angry rhetoric flowing from labor leaders, 's CEO said he's confident union officials understand the supplier's situation and recognize the need to sidestep a confrontation. "I'm confident we can avoid one. A strike doesn't do anyone any good. It just destroys value." Even so, Miller acknowledged that there's a political issue at stake as well. Many top leaders of the UAW are up for re-election in June, while others are stepping down. That could make it more difficult for the union to take what Miller believes are the necessary steps. -TCC Team

Find out why Steve Miller wants Delphi to band together

The challenge for Ford Motor Co. is to institutionalize change, said CEO Bill Ford, "without it being chaotic. We have to make (innovation) part of the decision-making process without disrupting the company." Ford had plenty more to say during an appearance on Wednesday, where he was named Industry Executive of the Year.

Has Ford stabilized, or is it still in freefall?

Tower Automotive Inc. has reached an agreement with retirees on pension and healthcare issues and remains in talks with its unions on proposed wage and benefit cuts, Chief Executive Kathleen Ligocki said on Wednesday. Ligocki said the agreement was an important step forward in the company's effort to exit bankruptcy by the end of next summer.
Tower, a metal vehicle frames producer that filed for bankruptcy protection in February 2005, has asked a bankruptcy judge to cancel its labor agreements with its unions, including the United Steelworkers and the United Auto Workers. The judge, however, has not yet ruled on the motion.

Meanwhile, Tower, a major supplier to companies such as Ford and DaimlerChrysler, is continuing to negotiate with both the United Auto Workers and the United Steel Workers. The two unions, which represent approximately 2000 Tower employees, have threatened a strike should the judge issue a ruling that allows Tower to impose a new contract. Ligocki, however, said discussions are continuing and Tower still hopes to reach an agreement with the union fairly soon - perhaps as soon as the end of April.

"I believe, one way or another, that we will come to a solution," Ligocki said. "A work stoppage won't help anybody," said Ligocki, who noted Tower's customers are undoubtedly doing everything possible to line up alternative suppliers in the event of a strike.

However, she noted the discussions with the unions are making headway. "This is the same judge that handled the Northwest Airlines case and we know how that came out," she said. In the Northwest bankruptcy case, the judge basically forced the airline and the pilots union to negotiate until they reached a deal. "Everybody knows we have to figure this out," she added. "Rhetoric aside, the discussions are sober, tough and everyone is very engaged."

"The unions are very sophisticated," she said, and appreciate the challenges facing companies such as Tower, who are being pushed by customers to offer the lowest possible price for their products.

Ligocki, an executive at Ford before moving to Tower, said she doesn't expect the cost pressures in the industry to relent because they reflect the competitive reality of a global economy. "To be successful, all of us are going to have to put aggressive productivity and cost reduction programs in place," she said.-Joe Szczesny

Joe Eberhardt, Chrysler Group executive vice president in charge of sales and marketing, said Tuesday that the new Compass will give Jeep a strong entry in the small sport-utility vehicle segment, which is expected to expand rapidly in next few years. Sales in the segment passed 300,000 units in 2005 and could easily triple to 900,000 by the end of the decade, added Eberhardt.

"The segment is going to grow exponentially," noted Eberhardt, adding the Compass also is expected to attract younger consumers looking for an affordable vehicle, and women. The Compass, while it represents a departure from Jeep's traditional emphasis on off-road prowess, also takes the Jeep line into new territory, Eberhardt added.

"I think if we had changed the traditional Jeep, there would have been a problem," because it would have compromised Jeep's traditional appeal, he said. The Compass, which is built on the same assembly line in as the Dodge Caliber passenger car, takes Jeep into an entirely new segment, Eberhardt said.

Chrysler representatives also pointed out that the Compass will still the most off-road capable vehicle in is competitive set, which includes vehicles such as the RAV4, Kia Sportage, Saturn Vue and Honda CR-V. To make sure the Compass could go off-road, the underbody sits a full inch higher than that of the Caliber, said Michael Berube, senior manager for Jeep Marketing. The fuel line also has been  tucked up in the body and the seating position in the Compass is two inches higher than in the Caliber, he added.

Eberhardt also emphasized that the 13-percent increase in the Chrysler Group's passenger car sales was no fluke, with the entry of the Caliber into the passenger car segment in a big way. Moreover, the group's passenger cars now sell with few incentives and have strong residuals, he noted. However, all manufacturers are offering substantial incentives in the pickup truck and SUV segments. Honda, for example, usually offers nominal incentives, roughly $200, on its vehicles but it has been forced to offer hundreds of dollars in incentives on the Ridgeline pickup truck, Eberhardt noted.-Joe Szczesny

Get more on March's sales numbers

CEO Hopes for No Strike 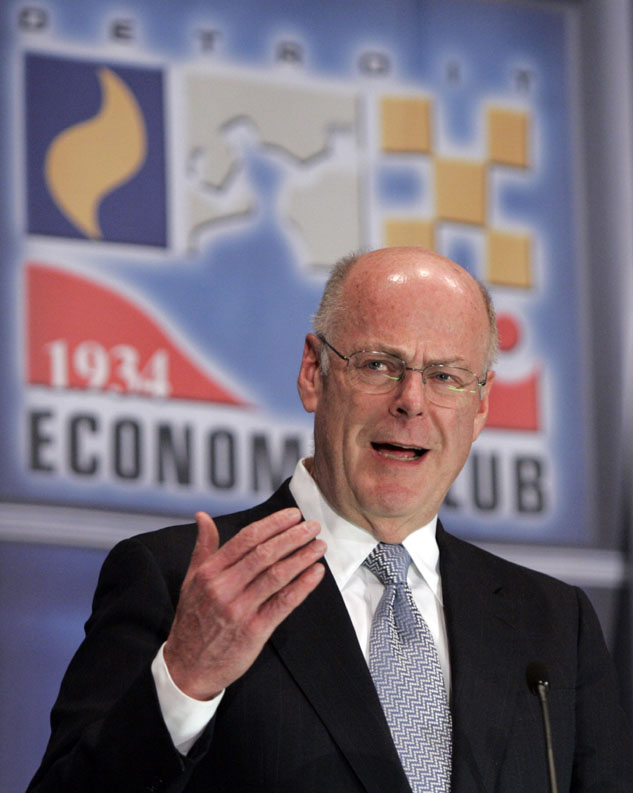 Delphi Corp. believes it can restructure and reduce the wages of its workers without a nasty strike, says the company's top executive, Robert "Steve" Miller. Miller also said it was too soon to write off the domestic auto industry as a failed enterprise and predicted it will emerge from its troubles a stronger and healthier one just like the steel industry did earlier in the decade. However, he also stressed that Delphi needs a competitive wages and benefits package from its unions and insisted that he is not asking for anything that the UAW and other unions haven't given other suppliers in the U.S. with whom Delphi now competes, he said. But will the union back down from its strike talk?

What's next in the Delphi Chapter 11 saga?

What had threatened to be a sizable protest during an appearance by Delphi CEO Steve Miller fizzled under a blanket of cold rain and strong winds on Monday. Organizers had hoped to draw at least 100 protesters for the gathering outside 's Masonic Auditorium, where Miller addressed the Detroit Economic Club. Ultimately, there were less than two dozen men and women, drawn from various Delphi and General Motors plants around the .

John Martinez, a member of the United Auto Workers from GM's Poletown assembly plant, said the weather wasn't going to keep him away.

"We should shut down the entire industry," he said, in order to prevent companies like from cutting workers' wages and benefits. "We can't support out families with what they propose," he added, in reference to the massive reductions proposed by .

Inside the auditorium, Miller acknowledged the protesters, saying "I can't blame them for being mad." But referring to the economics of globalization, he insisted, "we have to face reality together."

Marching back and forth along a small strip cordoned off by police, the protesters tried to make up in volume for their small numbers, banging drums, chanting slogans, and waving placards. One referred to the dollar-a-year salary Miller had accepted from , proclaiming, "Miller isn't worth a buck." Apparently, joked, the supplier CEO, "that must've been a typo." -TCC Team

Any kind of strike by workers at the bankrupt Delphi Corp. would pose a serious problem for the giant auto supplier's largest customer, General Motors. But GM CEO Rick Wagoner stressed cautious confidence and its unions will ultimately avoid a confrontation.

"I don't underestimate the basic challenges the UAW faces," said Wagoner, referring to demands for massive cuts in pay and benefits.

In bankruptcy court, last Friday, Delphi CEO Steve Miller requested that the company's current labor contracts be voided, while also asking permission to close plants and cut thousands of jobs. The UAW has threatened to strike if the request is implemented, and industry analysts warn that a walkout would starve GM of parts, quickly shutting down its assembly lines. The cost could run into the billions of dollars, with some observers fearing GM itself could plunge into Chapter 11. The automaker had hoped to forestall a confrontation with a proposal to buy out thousands of workers, while letting others move over to GM plants at current pay rates.

"In this case, it takes three to tango," said Wagoner, noting GM is still negotiating with the union and . The auto executive said that despite the angry rhetoric, union leaders recognize the goal is a settlement. "They continue to have an interest in a successful GM," Wagoner asserted, "and a big strike isn't in the interest of a successful GM." -TCC Team

Declaring the deal a "home run," General Motors Chairman Rick Wagoner announced on Monday that the automaker planned to sell a majority stake in its finance subsidiary, GMAC, to Cerberus Capital Management LP, a private investment firm. Cerberus orchestrated the deal - which still faces a variety of regulatory hurdles - with a consortium of investors including Citigroup Inc. and Aozora Bank Ltd. The troubled automaker, which has been shedding a number of assets in recent months, expects the sales to generate as much as $14 billion in much-needed capital over the next three years, but also acknowledged the deal will cut into the cash generated by the lucrative finance arm.

Will GM's GMAC sale shore up its finances?

First drive: 2022 Lexus ES 350 settles into middle life-cycle age
Commenting is closed for this article
Contribute
Send us a tip Comment Contact the editor
Follow Us