's G6 mid-sizer-known in some circles as the car that Oprah built-gets a high-performance edition at the coming auto show. The April expo will showcase the new G6 GXP, a spin-off of the two-door coupe that gets a 270-hp, 3.9-liter V-6 engine along with body mods. Technically a concept, the G6 GXP will share show space with the new Mitsubishi Outlander, the revamped Audi TT, and a host of other new vehicles, most of which you can see in our show preview:

The good Vibes are leaving , although one will stick with the GM brand through at least the 2007 model year. Reuters reports that is dropping the GT and all-wheel-drive versions of the nifty Vibe hatchback from its lineup following the current model year. Slow sales and expensive refits to bring the engine up to new emissions standards have been cited as the reasons for the move. The news service adds that may bring back the performance and AWD versions in a next-generation car. The Vibe is built in GM's joint-venture NUMMI plant in , , which it shares with .

GM and Isuzu are in discussions to figure out how the world's biggest automaker can dispose of its stake in the Japanese truckmaker. GM says it wants to sell its interest in Isuzu Motors Ltd., which now equals about 7.9 percent of the Japanese company's shares. GM has approached two Japanese financial institutions about taking on its share of the company, which has all but disappeared from the light-truck market. GM's stake could be worth $320 million. GM and Isuzu share interests in diesel engines and in pickup trucks and SUVs; Isuzu sells rebadged versions of GM's mid-size SUV and pickups in the

After months of evaluating new mileage proposals, the Department of Transportation has set higher fuel-economy levels for light trucks and SUVs beginning in 2008. The new rules will raise the Corporate Average Fuel Economy (CAFE) for trucks from 21.6 mpg today to 24 mpg by 2011. By then the CAFE rules will also include SUVs weighing up to 10,000 pounds, which will add vehicles like the HUMMER H2 and the biggest Chevy Suburbans to the fuel-economy rules for the first time. The new rules could save up to 10.7 billion gallons of fuel over the lifetime of the affected vehicles, and could cost up to $200 per vehicle in technology needed to boost fuel economy in those vehicles. Passenger cars will continue to be held to a 27.5-mpg fleet average.

Suzuki confirms that the new XL7 sport-ute is coming to April's auto show. The Japanese automaker - in which GM recently sold its 20-percent stake - says the new XL7 will share the stage with the SX4 crossover, an Aerio replacement seen most recently at the motor show. Along with the Suzukis, the show will premiere the new Benz E-Class, Saturn Outlook and Aura, and Nissan Altima-find out more about the upcoming show in our preview:

GM's "Black Tuesday" ended with the departure of several hundred salaried employees, most of them engineers from the company's workforce across the country. GM says it axed fewer than 500 jobs at 30 of its outposts across the country in the latest round of cuts. The company plans to lay off 7 percent of its white-collar employees this year. Last week, the company announced a major deal with the UAW to offer buyouts to more than 100,000 hourly employees at its manufacturing sites. GM also confirmed that its first-quarter market share for 2006 stood at 24 percent.

Despite an anticipated one-percent decline in its first-quarter market share, General Motors' marketing czar insists the automaker's "value pricing" strategy is working. Since last autumn, the troubled automaker has trimmed prices on the vast majority of its cars, crossover, and light trucks, while slashing back on its incentives. And the strategy is paying off, asserted GM Vice President Mark LaNeve, through rising retail sales, higher residuals, and increased awareness among buyers who might otherwise ignore the offerings from the General's eight North American brands. Even so, "there's a strong sense of urgency to show results," the executive admitted, and a lot of challenges yet to overcome. So is GM's gas tank half full or half empty?

Along with its new RDX compact crossover, Acura will also have a concept vehicle based around the next MDX large crossover for the upcoming auto show. The new version will be the second generation of the vehicle; a production version goes on sale in the fall. The MDX joins the RDX, the Saturn Outlook, Nissan Altima, and a slew of other new products coming to the show in April - get the rest of the debuts in our show preview now:

2006 New York Auto Show Preview by Marty Padgett (3/27/2006)
For the capital of the world, some global introductions. 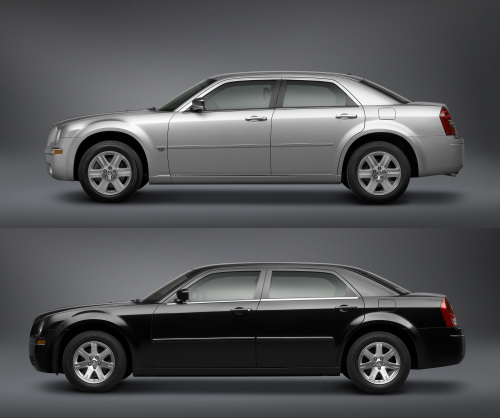 A new long-wheelbase edition of the glam Chrysler 300 sedan joins the automaker's lineup in the fall. The stretch 300 will be built by a limousine maker, Accubuilt, in . With a six-inch stretch in wheelbase, the 300 Long Wheelbase is expected to draw customers from the showroom as well as the limo market. The basic long-wheelbase car will offer additional features like lighted rear writing tables, more power outlets, footrests and custom paint colors. Engines will include the 3.5-liter V-6 and the 340-hp, 5.7-liter HEMI V-8.

The Detroit News reports that Ford's efforts to develop a rival to Chrysler Group's HEMI engine could be revived. The so-called "Hurricane" engine has been put back into development by Ford Americas president Mark Fields as a means of keeping the company's F-Series truck atop its class. The Hurricane project had been cut in Ford's massive budget slashing last year; the News says the plan now recognizes the need to stay competitive with power offerings not only from Chrysler, but now from and Nissan as well. The project will likely get a new name, given the intense storms that battered the Gulf coast last year.

Could Get New Cobo?

Prospects for a new Cobo Hall, home to the auto show, are taking an interesting tack. The News reports that the Detroit Auto Dealers Association is examining a plan to ask for federal money that could be used to expand Cobo Hall and create a research and exhibition center for automotive and energy technology. The estimated $600 million pricetag to add several new wings and more than 200,000 square feet of display space to Cobo could be underwritten in part with federal grants. The show organizers hope the new plan would net the show an additional 150,000 square feet of display space; it would, however, mean the end of Cobo Arena, which would be demolished to create a multilevel addition to the existing hall.

In the latest chapter of DaimlerChrysler's expensive foray into microcars, the company will spend another $1.2 billion on its smart division to cancel production of the forfour four-door it developed with Mitsubishi Motors. If approved by Mitsubishi, the end of the forfour will turn smart into a one-car brand - and will end the division's autonomy entirely, as operations will be folded into the Mercedes brand. The brand could be profitable at that point, DC officials say, even with the launch of the updated smart fortwo in 2007. Smart stopped building its Roadster model last year.