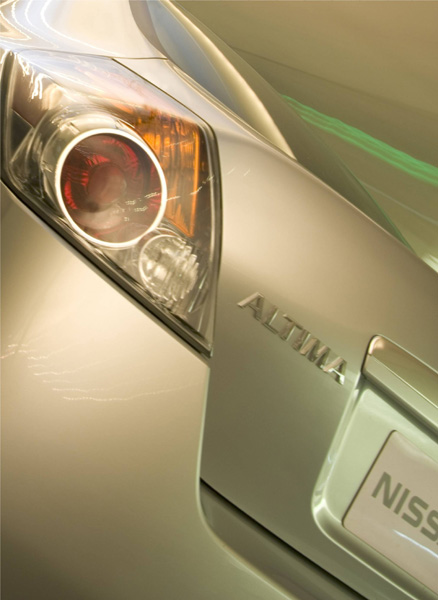 The auto show will be the first public display of the new 2007 Nissan Altima, the company confirmed on Wednesday. A new body style arrives in 2007 on a new "D" platform, promising better body rigidity and a newly penned suspension. Nissan's Xtronic CVT will be standard on all models, while the 3.5-liter V-6 and 2.5-liter four-cylinder engines will remain on the roster. On sale in the fall of 2006, the Altima, Nissan says, will be one of the best-performing front-drive sedans on the market.

Scion's latest Release Series 2.0 will show off its goods at the New York show, too - but this time the special edition is based on the brand's two-door tC coupe. On sale in mid-April, the tC 2.0 gets Blue Blitz paint, 17-inch wheels, side and curtain airbags, and a new stainless-steel grille. A Pioneer sound system is outfitted, too, and comes with three months of standard XM service, along with an iPod jack. Scion says only 2600 copies will be built, to be sold for $18,260 each.

The United Auto Workers has reached agreements with Delphi Corp. and General Motors Corp. on a restructuring plan that will speed up the retirement or transfer of more than 100,000 blue-collar workers from both companies.

GM officials also said the agreement will include a combination of early-retirement incentives and other considerations to help reduce employment levels at both GM and in a manner that benefits both eligible employees and both companies.

"When we announced the capacity rationalization and employment reduction plan late last year, we said we'd be working with UAW leadership to develop an accelerated attrition program that would help us achieve needed cost reductions as rapidly as possible, while at the same time responding to the needs of our employees," said GM Chairman and Chief Executive Officer Rick Wagoner.

"We are pleased that this agreement will help fulfill that important objective. In addition, the agreement will enhance the prospects for GM, the UAW, and Delphi to reach a broad-based consensual resolution of the restructuring."

"We remain focused on the transformation of in order to emerge successfully from the Chapter 11 reorganization process and provide a strong foundation for our future," said Delphi President and Chief Operating Officer Rodney O'Neal. "An accelerated attrition plan will help enable the transformation of our manufacturing and support operations into a much more competitive cost base."

The agreement is subject to approval by the Bankruptcy Judge overseeing 's bankruptcy proceedings. Approximately 13,000 hourly union-represented employees may be eligible to participate in the plan, officials said.

In a key portion of the agreement, GM said it will provide substantial financial support under the proposed plan, which is subject to bankruptcy court approval. GM also agreed to take back 5000 workers as part of the agreement, which capped off more than a week of intensive negotiations between GM, , and the United Auto Workers.

GM has pledged to assume the financial obligations related to the lump-sum payments to be made to eligible Delphi hourly employees accepting normal or voluntary retirement incentives and certain post-retirement employee benefit obligations related to employees who flow back to GM under the plan. GM expects to record the cost associated with the attrition program in 2006. The cost will be incurred as employees agree to participate, according to GM, which last week raised its estimates of the cost of the buyouts and restructuring in a filing with the SEC.

The proposed plan for eligible hourly employees includes normal and early retirements, with incentives ranging up to $35,000. -Joe Szczesny

BMW has opened a new test facility in , about 40 miles from the polar circle. The test center offers the development engineers of BMW, MINI, and Rolls-Royce optimal conditions for intensive work on new vehicle components and new models. With the new facility, the BMW Group is the first car manufacturer with a permanent basis there. Between November and April, BMW will send at least 100 employees to Arjeplog, who will work in shifts of two weeks for each test program. Between January and March, there will be around 200 engineers.

The 69-acre facility includes a 0.46-mile track, a 0.41-mile long area for testing-driving dynamics, heated and cooled tarmac tracks, a hill with slopes between 10 and 25 percent, and tracks for driving and braking on different types of roads. Close to the BMW facility, the test-drivers can drive on the prepared ice "rink" of the frozen .

One of the systems to be further tested up north will be BMW's xDrive all-wheel-drive system. In 2005 BMW applied it to 25 percent of all BMWs sold worldwide. This means that BMW sells more AWD vehicles than any other premium brand. This year, BMW will not only offer the X5 and X4 with xDrive, but also the Touring versions of the 5- and 3-Series. In 2008 BMW plans an entirely new model with a coupe-like design, higher seating position, and the xDrive system.

Since the introduction of the 325ix in 1985, around one million BMWs with AWD have been sold, of which more than 500,000 with xDrive. -Henny Hemmes

Group 1 Automotive, a 95-dealership publicly-owned network based in , rose to fourth place on the widely-watched Automotive News top 100 dealer roster for 2005, it was reported by the trade journal Monday. Led for the past year by former Ford executive Early Hesterberg, Group 1 advanced from fifth place in the rankings by outselling privately-owned V.T. (Van Tuyl), Inc., which has 60 stores based in Shawnee Mission, Kansas, by a count of 126,108 new-car sales last year to 124,632, a segment-leading gain of 6.9 percent over 2004.

The 100 top-volume dealers posted an increase of only 0.6 percent in their new-vehicle sales last year. AutoNation, Inc., the nation's largest dealer, posted a 4.6 percent decline in new-unit sales, to 391,698 from 269 dealerships. UnitedAuto Group, which rose 0.1 percent to 178,157 units, is in the runner-up spot. Third-place Sonic Automotive increased 2.6 percent, to 143,757 sales. The six publicly-owned dealership groups, also including sixth-place Asbury Automotive and eighth-place Lithia Motors, sold slightly more than one million new vehicles last year, or 39.7 percent of sales of the entire top-100 roster.

In line with a dealership growth trend at most mega auto retail collections, Group 1 bought six domestic franchises and a BMW store in 2005. UnitedAuto announced an agreement Tuesday to purchase the Motorwerks BMW/MINI dealership in , raising the Bloomfield Hills, Mich.-based group's BMW dealer total to 31 and its MINI total to 12. -

The enhanced High Definition (HD) radio system, pioneered already on BMW's 6-Series and 5-Series luxury cars as a factory-installed accessory, is growing rapidly and will be offered as an OEM feature by eight automakers in the near future, says Bob Struble, president and CEO of iBiquity Digital Corp., the HD technology inventor. Addressing the Automotive Press Assn. in , Struble said that more than 700 radio stations are now broadcasting digitally. By early April, he forecast about 300 stations will be able to offer HD radio as well.

"Customers with the first HD radio setups really enjoy the benefits of having static-free and sound-enhanced reception," Struble said. "HD provides CD quality on FM stations and FM quality on AM stations. BMW charges $499 for the HD radio option, but we're looking at lower prices as more automakers and stations get on board and an aftermarket HD addition to existing auto radios priced south of $200 rolls out."

Struble said that dealer or independent garage installation of HD radios could start as early as this fall. Buyers of the new system can access either or both of the two satellite radio services, he said. The company can be reached at www.ibiquity.com. -

Chrysler Group today announced new appointments at five of its powertrain and vehicle assembly plants. "The mission of the entire Manufacturing team is to build quality Chrysler, Jeep(R), and Dodge vehicles safely and efficiently," said Frank Ewasyshyn, Executive Vice President - Manufacturing, Chrysler Group. "Each of these executives has demonstrated the experience and expertise needed to help us do that and I congratulate them on their new appointments."