Confirming a report that first appeared on TheCarConnection.com last month, Nissan's top American executive, Jed Connelly, has confirmed he will leave the automaker's marketing arm before it begins a much-debated move to this summer. The 60-year-old Connelly, who originally joined Nissan in 1989, insisted the move wasn't the reason for his planned July 1 departure, though it proved a good point to retire. "Sometimes you put the new team in place and get out of the way," explained Connelly, senior vice president of sales and marketing for Nissan North America, during a Wednesday conference call with reporters. "The physical transition provided the perfect timing." That transition will place Brad Bradshaw, now NNA's vice president of sales and marketing, at the helm of the relocated company.

Last year, Carlos Ghosn, CEO of both Nissan Motor Co., and its French partner Renault, ordered the company to pull up stakes from the Los Angeles and move to Nashville, not far from Nissan's Smyrna, Tenn., assembly plant. The decision is expected to yield significant cost savings, though many observers believe it could also result in some disruption for Nissan. During the Wednesday call, company officials reported that 47 of 60 senior executives have agreed to relocate, but only about half of the rest of NNA's 1300-member workforce have accepted transfers. The impact will be especially hard-felt by the financial side of the company, noted Connelly. Even so, he insisted, "I think we've got everything we could think of smoothly in place…(and) that'll ride us through the rough water." The relocation is expected to take until August 1. Meanwhile, Nissan officials reported that so far, they've been unable to line up a buyer for the headquarters they soon plan to abandon. -TCC Team

It took barely a month for Liz Vanzura to put her mark on the Cadillac brand. On Friday, GM announced what had been rumored; that some or all of the Cadillac advertising work would move from Leo Burnett. Vanzura moved half the business to HUMMER's agency, Boston-based Modernista. Vanzura had been running HUMMER marketing before she took over at Cadillac.

Modernista will handle ad work for the CTS sedan, SRX crossover, performance V-Series models and other unnamed cross-brand projects. Leo Burnett will keep the ad work for Escalade, DTS, STS and the XLR. If Modernista does well with the assignment, though, Burnett could easily lose it all inside of a year. Burnett also handles ads. And GM executives are known to be considering handing that brand off to Deutsch Advertising in . Cadillac spends about $225 million on national ads last year.

Vanzura, say sources, had been sent to Cadillac by GM sales and marketing chief Mark LaNeve to fix what has been a sliding advertising effort at his former brand. When Vanzura arrived in mid-January, she was disgusted with the ad that had been created for Cadillac in the Super Bowl, a mock fashion show for the Escalade. It was a dud on all the Super Bowl ad meters measuring how much the audience liked the ads in the big game. Meantime, Modernista had created a Super Bowl ad for the HUMMER H3 that was very well received by the audience and the critics.

Vanzura worked at Volkswagen as head of advertising in the late 1990s when the automaker was producing ads that helped set the brand on fire, and were the talk of the ad world. Remember "Da Da Da"?  Her agency then was Arnold Worldwide, and the most talented creative on the account was Lance Jensen, who went on to found Modernista.-Jim Burt

Consumer Reports released its 2006 rankings of top vehicles and domestic products didn't fare very well. For the first time in nine years, no product from GM, Ford or Chrysler showed up on CR's recommended list. The ratings are based on a series of tests as well as crash performance data and reliability surveys. The winners this year included the Honda Civic in the small car category; the Honda Accord in the family-car category, and the Acura TL in the upscale car category; the Infiniti M35 in the luxury sedan category; the Subaru Forester in the small sport-utility vehicle category and the    Highlander in the mid-size SUV category. The Honda Odyssey was the top vehicle in the minivan category while the Toyota Prius was named the best in the Green Car category, while the Subaru Impreza was dubbed the winner in the fun to drive category and the Honda Ridgeline was named the best pickup truck.-Joe Szczesny 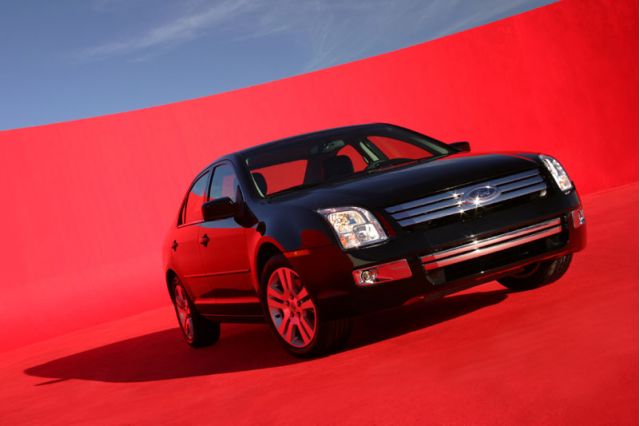 The Insurance Institute for Highway Safety (IIHS) says the Ford Fusion ranks "poor" in its latest crash tests. The industry-funded research group points to the new sedan as evidence of the effectiveness of side airbags. The IIHS tested a Fusion without side airbags for side-impact protection and gave the four-door its lowest "poor" rating for side-impact protection. Similarly, a Pontiac G6 tested with and without side airbags earned acceptable and poor ratings for side-impact protection. In frontal-impact tests, the Fusion earned an "acceptable" rating. The new BMW 3-Series sedan and Lexus IS sedan were ranked at the top of the IIHS' ratings for both front and side impact crash tests, while the Hyundai Sonata received a good ranking for front impact and acceptable for side impact. The IIHS tests vehicles at 40 mph in front impact tests and 31 mph in side impact tests.

Camaro Going Ahead; Mini-HUMMER Back On Schedule

"All of us are hoping (the Camaro) will be a production-approved program" in the very near future, said GM Vice Chairman Bob Lutz, adding that "We're all working on it as if it were an approved program." The "heritage" Camaro, which debuted in January, proved one of the most popular concepts at this year's auto show, but even as GM planners continue studying ways to craft a profitable business case, development work is moving ahead. "We're not wasting any time, said Lutz. "There is no reason to assume they would turn it down," he said of the GM board. Meanwhile, the automaker has revived the long-rumored Hummer H4 project. The Wrangler-sized vehicle was pulled from the GM schedule, Lutz confirmed, because the original "clean sheet of paper" approach, which was based on advanced, spaceframe technology, just wouldn't have been able to generate a profit. "A much more derivative approach" has now been adopted, though Lutz stressed that "it will still be a unique vehicle." As with the Camaro, GM's board has yet to give the go, though Lutz said he is "confident it will be" approved.

The shortcomings of General Motors' product development efforts were exposed yet again last week when the automaker confirmed that it was dropping the Pontiac GTO this summer. GM has rolled out the GTO as kind of an off-the-shelf answer to the complaints that the automaker's cars weren't exciting or muscular enough.

The Australian-made GTO, with its 400-horsepower, 6.0-liter V-8 engine could accelerate from 0 to 60 mph in six seconds. But sales, despite some hefty discounts and some heavy-duty personal lobbying of the press by GM Vice Chairman Robert Lutz, never lived up to the hype.

Thus, GM decided to pull the plug on GTO without even bothering to find a replacement for the car. At the same, time GM also shut down an assembly plant in that build mid-size sport-utility vehicles. GM is ostensibly working on a replacement for the current mid-sized SUVS, which are also being supplanted by a new generation of crossover vehicles. However, GM's crossover replacements won't be ready until later this year when the company opens a new assembly plant outside of

The start-up of the new plant has been pushed back by years as GM has wrestled with decisions on what to build in the new plant.

Consequently, the new crossover from will be rolling out months after competitors have managed to introduce a new generation of crossovers to the public.