The next Honda hybrid to join the company's lineup may be a gas-electric version of the new Fit subcompact. A report in 's daily newspaper, the Nihon Keizai, suggests that Honda will adapt the Fit to hybrid power, while keeping the price under $12,000 in its home market. At that price the Fit hybrid would cost only about $1700 more than the gas-engined version. (Though prices are yet to be released, we expect the base U.S. Fit to come in at $13,500.) The powertrain would be similar to that in the Insight hybrid, with a 1.0-liter gas engine being teamed with a small motor and battery system. The paper says the hybrid version would be marketed around the world starting in April of 2007. Honda now offers the Insight hybrid, as well as the Civic and Accord Hybrids.

General Motors has filed a motion to secure a seat on Delphi Corp.'s creditors committee, claiming it is the partsmaker's largest unsecured creditor with a claim of more than $1.3 billion. Currently the UAW has a seat on the committee as well as the Pension Benefits Guaranty Corp. GM contended it needed to have a say in how the supplier was reorganized to ensure its own ability to remain viable. A hearing on the motion is scheduled for March 9 before U.S. Bankruptcy Judge Robert D. Drain for the Southern District of New York. Objections to the appointment must be filed by March 6. -Michael Strong

In a surprise move, Mitsubishi Motors North America announced the resignations of Dave Schembri, executive vice president of sales and marketing, and Wayne Killen, vice president of marketing. Mitsubishi said they left to pursue other opportunities. However, Schrembri had joined only about a year ago and had succeeded in halting the slide in Mitsubishi sales and also in getting buzz going around the company's advertising and products. Schrembri could not be reached for comment. No replacements were named. For the present, the sales and marketing operations will be directed by president and CEO Hiroshi Harunari, Mitsubishi's official statement said. -Joe Szczesny

The Society of Automotive Engineers is planning a comeback for annual Congress & Exposition, which will be held in early April in , even as it's being courted by other communities.

The annual SAE meeting has lost its luster in recent years, but for 2006 five different manufacturers - General Motors, Ford, DaimlerChrysler, , and BMW - are supporting the Congress. Several key suppliers such as Behr and Continental Teves have agreed to participate too, according to SAE's Bob Chalker. "It's been tough the last five or six years since 9/11," he said.

For 2006, the technical sessions and educational seminars have been reorganized so that participants get a better chance to look at the displays on the Exposition floor inside Cobo Hall. In addition, the SAE has set up a series of private salons so suppliers can show off their ideas and components to customers without having competitors peering over their shoulders - one of the key reasons many suppliers had withdrawn from the SAE event in recent years.

Chalker said this year SAE is expecting more visitors from abroad due to the changing nature of the business, which is more global and international than it was only ten years ago.

Don Whitsitt, vice president with Aisin, a Japanese supplier that has a large presence in , said the SAE Congress & Exposition remains an excellent place to pick up on future trends. Visitors might not find it at any one display, he said, but if they look at several displays they get a sense of what's developing.

"The SAE meeting is one of the few venues in the world where we get a look under the skin of an automobile," said Robert Last of FEV, a German auto supplier.

Chalker also told the Automotive Press Association meeting in that several cities have approached the organization about hosting its annual gathering, which still draws between 35,000 and 40,000 visitors. The sentiment inside SAE, however, is that the World Congress & Exposition belongs in near the heart of the auto industry. "We're very dedicated to keeping it in ," he said. -Joe Szczesny

The magazine ranked 303 companies. DaimlerChrysler, which made the list, is sort of an American company. General Motors and Ford did not rank in the top half of the motor vehicle segment and weren't ranked in the overall list. The top five in motor vehicles were: , BMW, Honda, Nissan, and DaimlerChrysler. Ford ranked number six, while GM finished number nine, between heavy-truck manufacturers Paccar Inc. and Navistar International.

Using a scale of one (best) to 10 (worst), the companies were judged in eight categories: innovation, employee talent, use of corporate assets, social responsibility, quality of management, financial soundness, long-term investment, and quality of products/services.

A new study from AutoPacific stands on its head the notion that automakers have to chase young buyers. The study says automakers ought to worry less about the youth market and instead pay more attention to the Baby Boomers, who range in age from 41 to 60. Baby Boomers have the cash needed to spend on cars, the study says, while younger buyers may like them but can't afford them.

The study appears as a spate of new books, such as Generation Debt: Why Now Is a Terrible Time to Be Young, by Anya Kamenetz, are arguing that young Americans face a tough row economically because of dramatic shifts in the economy.

If the books are accurate, it appears the auto industry, like the Spanish explorer Ponce de Leon, are chasing a fountain of youth that may not exist. Baby Boomers, on the other hand, are the most affluent Americans, with three-quarters of the nation's financial assets and $2 trillion in disposable income annually. Boomers control more than 50 percent of all discretionary income and will become more affluent as they inherit a great amount from their parents, the report noted.

The average American household purchases 13 cars over a lifetime.  Seven vehicles are purchased after the head of the household turns 50, according to AutoPacific, which also notes that 50 percent of Boomer households already own 3 or more vehicles.

AutoPacific also estimates from its research that 54 percent of Boomers expecting to keep their vehicle 4 years or less, while 26 percent will turn them over in 3 years or less, making them very active consumers of automotive hardware.-Joe Szczesny

General Motors Corp. saw its credit rating hacked again on Tuesday. Moody's Investors Service cut the company's rating on $30 billion of debt to B2 from B1. Analysts said they were uncertain GM can establish competitive wages and benefits without filing for bankruptcy. Moody's had placed GM under review for a possible downgrade on Jan. 26.

Lotus is losing its North American chief for another undisclosed job in the auto industry. Automotive News reports that Duke Hale, CEO of Lotus Holdings Inc., has resigned from the Atlanta-based, American arm of the British sportscar maker. Hale also ran the company's engineering group in Ann Arbor, Mich. Lotus brought the Elise roadster to the U.S. under Hale's watch and will soon launch the Exige coupe in the States. Hale had worked at Isuzu and Mazda before joining Lotus in 2004.

The chief financial officer of struggling interiors supplier Lear Corp. is leaving to take on a like post at military supplier Raytheon Corp. David Wajsgras, 48, will depart Lear on March 10, according to a report in Automotive News. Wajsgras has been CFO for four years; he'll be succeeded by vice chairman James Vandenberghe on an interim basis until a successor is named. Lear's losses in 2005 totaled more than $1.3 billion.

General Motors says that Mary Boland's replacement as CFO will be Mark Newman. Newman has served as the company's assistant treasurer since 2004, and has held posts in the company's Chinese operations as well. Boland left the CFO position two weeks ago, and had served as the brand manager for the Pontiac Bonneville.

Finalists Named in World Car of the Year 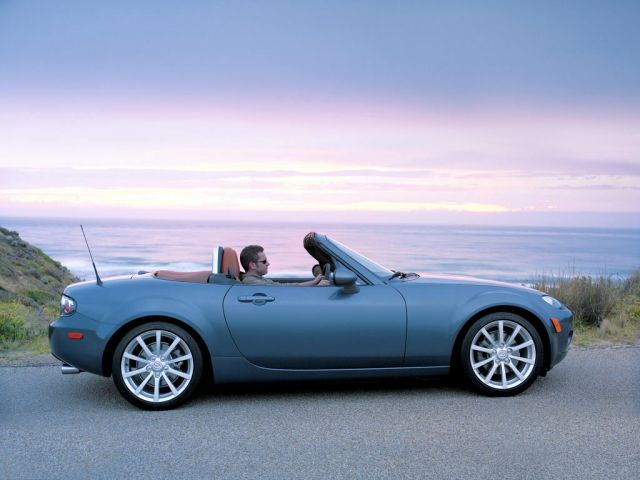 A panel of 46 automotive journalists from around the world has come up with a final list of ten vehicles that will compete to become the 2006 World Car of the Year. The initial list of 27 vehicles has been narrowed to these finalists:

The winner will be chosen by secret ballots in late March. The winner will be announced at the New York Auto Show on April 13 during the show's press days. The panel of journalists also will choose a performance car, green car, and car design of the year.

Group 1 Automotive, publicly-owned 95-store megadealer, overcame the impact of Hurricanes Katrina and Rita, plus reduced sales of domestic brands, and reported a fourth-quarter net income spurt of 44 percent as revenues for the full year 2005 rose to a record $5.96 billion. Houston-based Group 1 finished a year marked by a corporate reorganization plan with "meaningful improvements in our overall profit performance," said President and CEO Earl J. Hesterberg. As gross revenues advanced 9.8 percent for the year, a fourth-quarter net income of $16.2 million led to a yearly net of $70.3 million, or $2.90 a share.

The upbeat results prompted Group 1's board to declare its first-ever quarterly dividend, 13 cents a share, and Hesterberg to forecast a further guidance advance this year to $3.15-$3.45 a share if new-vehicle sales remain at the 17 million annualized level. Hesterberg said in an analyst and media conference call that luxury and import brands accounted for a company peak of 62.4 percent of new-vehicle sales in 2005, rising in the fourth quarter to 65.7 percent. Group 1 sales by brands were as follows for the year: Toyota/Lexus/Scion, 29.2 percent; Ford Motor Company brands, 18.5 percent; DaimlerChrysler, 14.8 percent; Nissan/Infiniti, 10.9 percent; GM brands, 9.8 percent; Honda/Acura, 9.6 percents; and others, 7.2 percent.

Group 1 acquired a Toyota/Lexus store in , in the fourth quarter, in line with acquisition trends among other publicly owned megadealers. "The , Honda, and BMW brands are a fast-growing part of our business," said Hesterberg." -

Sonic Automotive, the third largest megadealer network, with 150 U.S. stores, reported a surge in net income and revenues for 2005 and raised its earnings-per-share guidance for 2006 sharply as a result.  President and COO Jeffrey C. Rachor boosted his forecast for 2006 earnings from $1.12 a share last year to between $2.40 and $2.50 this year, while predicting a sales rate of between 16.5 million to 16.8 million new car and truck sales. Sonic, based in Charlotte, North Carolina, boosted its gross revenues to $7.88 billion in 2005 from $7.17 billion the previous ear.  Net income for the full year rose to $101.8 million from $93.3 million and, for the fourth quarter, a record jump of 29 percent was recorded as net income spurted to $25.2 million.

Rachor credited Sonic's improved revenues and earnings to an 18-month strategy focusing on acquisition of luxury and high-end import dealerships, coupled with divestiture of "under-performing" stores with brands whose markets are shrinking.  He announced purchase in late 2005 and early 2006 of a Mercedes-Benz dealership in northern California and two "Tier One" import-brand stores in the Washington, DC market.  Sonic sold 143,757 new vehicles last year, up 6.8 percent from 2004.  Luxury and import brands accounted for 69 percent of Sonic's revenues, Rachor said, which were divided as follows:  GM, 20 percent; BMW, 17.1 percent; Toyota/Lexus, 16.4 percent; Honda/Acura, 13.9 percent; Ford brands, 7.9 percent.  The truck share of Sonic's vehicle mix declined to 42.4 percent, of which 9 percent were SUVs, Rachor said, adding that sales of fullsize SUVs fell 40 percent during 2005.

"I'm impressed by the new full-size SUVs from GM and other manufacturers and expect them to do very well," Rachor said. -