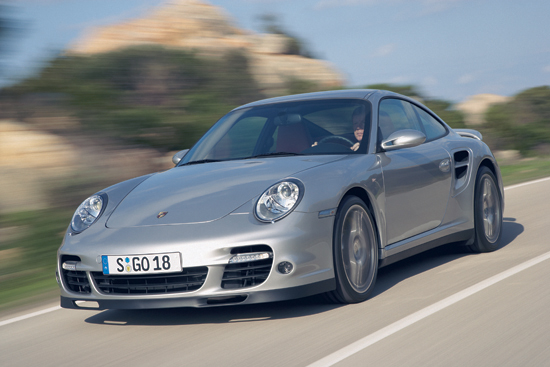 The upcoming Geneva Motor Show will be the setting for the launch of Porsche's sixth-generation 911 Turbo. The new Turbo model will show up at the Palexpo in March, powered by a 480-hp version of the classic Porsche flat-six engine, up 60 hp in this edition. Porsche says the new model will zip to 60 mph in less than 3.9 seconds when also outfitted with the standard six-speed manual transmission - and even quicker with the six-speed Tiptronic S automatic transmission, in 3.7 seconds or less. With either transmission, top speed is limited to about 190 mph. The Turbo will be available in Europe in the summer; plans and prices have yet to be announced.

CarGirl: What Real Women Drive by Carol Traeger (2/13/2006)
Our battle of the sexes takes place on wheels.

General Motors Corp. plans to spend $545 million upgrading factories around . The new investment also will add 280 jobs in the months to come, according to Joe Spielman, GM vice president for North American manufacturing operations. Most of the jobs will be at GM's Pontiac Assembly Plant, which is gearing up to build new Chevrolet Silverado and GMC Sierra pickup trucks. Another investment will pay for a new hydroforming line at the stamping plant on the north side of Pontiac that will be used to build parts for the new Saturn Sky, Pontiac Solstice and, starting next year, a new Opel roadster that will be exported back to Europe.

"GM's investments demonstrate our commitment to continuously improve our products," said Spielman. "They also show our dedication to strengthening our manufacturing operations." Spielman also said the remaining money will finance the 120,000-square-foot expansion of the body shop at the Lansing Grand River plant where the company plans to build a new car next year, Spielman said. The rest of the money will be used to pay for construction of a new six speed transmission line at the GM transmission plant in and a series of changes at an engine plant in .

Meanwhile, Michigan Governor Jennifer Granholm was quick to hail the new investments. "GM's decision to invest more than a half billion dollars in these manufacturing plants clearly signals their belief in our highly skilled and dedicated workforce," Granholm said. "Because the automotive industry is such an important cornerstone of our state's economy and livelihood, we are thankful that GM has chosen to further invest in ."

"We want you to know that your success - and we know GM will have success in turning it around - is our success," she added. "There is no vision of 's future that does not include a vibrant and growing auto industry," added Granholm, who noted that the GM investment not only creates new employment opportunities but also protects an estimated 3600 jobs around the state.

Losing Minivan, Getting Base Coupe

dealers at the National Auto Dealers' Association convention in are being told they'll get a new entry-level coupe to sell, and at the same time have been informed they'll lose the Montana SV6 minivan, Automotive News reports. The coupe will be stopgap product based on the Chevy Cobalt, to be sold until GM comes up with a better strategy for getting younger buyers into the showrooms. The model, the News reports, will be a 2007 model and will be priced from about $20,000 like the similar Chevy Cobalt SS.

These photos of updated Ford Escapes show that a thorough freshening is in the works for Ford's crossover.

The biggest change comes at the front end, where new large headlamps, which closely mimic those on the Ford Edge and restyled Expedition, sit atop a chunky new front bumper that looks significantly more square-jawed than today's Escape. The grille appears to shy away from the clean three-bar design of Ford's Edge and Fusion, in favor of a trucky look more like the F-Series pickups.

In a market increasingly dominated by imports, there's one segment still controlled by the Big Three. But maybe not much longer, at least not if the 2008 Toyota Tundra connects with demanding American full-size pickup buyers. 's long-awaited update blew into the last week, where a million potential customers will see it at the Chicago Auto Show. The next-generation Tundra finally addresses a series of problems with 's previous full-size trucks. For one thing, they weren't all that full-size. And they were decidedly underpowered for a market segment where towing and hauling power matters. This time 'round, the new model is nearly a foot longer. And equipped with the optional, 5.7-liter V-8, it'll pull a 10,000-pound trailer. initially intends to offer at least 30 cab, bed, and powertrain combinations, and sources say more will follow, including diesel and hybrid engines. That's no guarantee of success, of course. has some powerful weapons in its truck arsenal. But with the debut of the new Tundra, the game could change dramatically.

UnitedAuto Group (UAG), second largest megadealer in the racked up its first $10 billion revenues year in 2005 as gross sales advanced 13.9 percent from 2004. Total revenues of $10.19 billion compared to $8.94 billion the prior year for the publicly owned Bloomfield Hills, Michigan-based network. Chairman and CEO Roger Penske reported a fourth-quarter revenues gain of 7.5 percent to $2.45 billion, up from $2.28 billion in 2004, in spite of severe storms during the period and slower sales for General Motors and Ford. UAG's net income for 2005 advanced to $118.9 million from $111.6 million the previous year. Fourth-quarter net income amounted to $30.1 million, or 64 cents a share, compared to $26.1 million, or 56 cents a share, in the same 2004 period.

Describing 2005 as an "outstanding year," for UAG, Penske forecast earnings of 53-57 cents a share in the first quarter of this year and $2.70-$2.80 a share for the full year, compared to $2.57 for 2005. The quarterly earning per share at the end of 2005 was 67 cents.  UnitedAuto is the only publicly owned megadealer group with overseas stores. It has 171 franchises in 19 states, plus Puerto Rico, and 126 located internationally, primarily in the United Kingdom. Overseas revenues grew 7.5 percent last year outside the U.S., Penske said, adding that it remains highly focused on growing with luxury and import franchises both at home and abroad.

According to the vehicle population report released by R. L. Polk & Co. today, 4.3 percent of total passenger cars and trucks were scrapped in 2005. This most recent overall motor vehicle scrappage rate represents a historic low, last set in 1949. The scrappage rate for passenger cars in 2005 was 4.5 percent, another record low. In addition, light-truck scrappage rates experienced a third straight year of decline at 4.1 percent in 2005. The median age of U.S. vehicles also increased across all major vehicle categories. Median car age was nine years in 2005, which continues a four-year record setting trend. For all trucks, the median age increased to 6.8 years in 2005. Light truck median age in 2005 increased to 6.6 years.

The Bob Bondurant School of High Performance Driving celebrates its 38th year of teaching the finer points of maximum car control Tuesday, February 14th. Since 1968, Bob Bondurant and his staff have been training anyone looking to improve their car control skills.  His students have consisted of performance enthusiasts, executives and teens, as well as aspiring and current racers, including NASCAR and Indy Car drivers.