At Auto Shows, Bimbos are Back 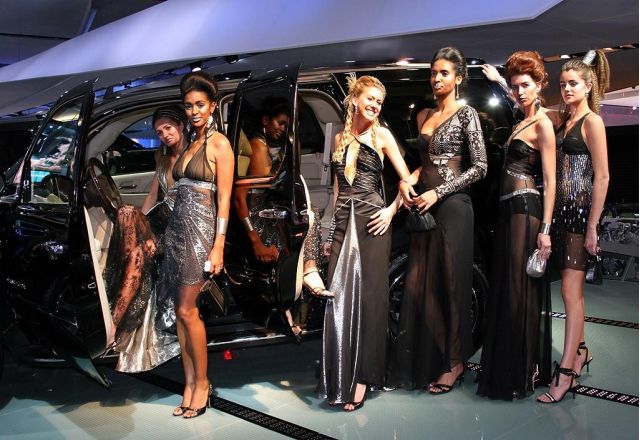 There they stood: begowned, anorexic Barbies in four-inch heels, draped over Lamborghinis and Ferraris at the recent North American International Auto Show in.

Okay, I’m prejudiced. The girls — oops, women — models around the cars at the press days of auto show were beautiful, and the male auto writers weren’t upset at all. They seemed to welcome them back after years of sexual correctness, meaning no eye candy with the cars.

But if there was a trend, this was it, even more than the return of the muscle car. Cleavage and glitter, legs and vacuous stares, posture a mother could be proud of holding up the Ferraris, Maseratis, Lamborghinis and — what’s this? — Buicks. GM, that apple pie company, was at it too with near-naked women. Even Audi kicked in with the near-naked doing interpretive dance. It was a blast from the past — women objectified under sponsorship. Most desperate move: bimbos — there I go again — with Buicks.

Mark Fields, Ford’s new North American boss, added a quotable quote to the press days when he reminded his audience that the Mustang used to be a secretary’s car until beefed it up. He forgot to mention how that ruined sales of the Mustang since there were more secretaries than hard-core muscle guys. Of course, today the secretary has gone the way of the bimbo and is now an administrative assistant.

Sexism made a stunning comeback this year. Perhaps having those objects of desire calmed the jangled nerves of the boys — an antidote to the spate of bad news that followed them into a new year — the junk status of Ford and GM bonds, the crippling pension legacies, the loss of market share and the devaluing of the product along with the women.

So where were the women auto executives when the plans were forged to soften up the press with a little T&A? Surely they are powerful enough to remind the guys that women who have fought hard for equality will notice that the bimbo factor is way up this year. They could even hold Carlos Ghosn up as an example: A short speech with complete information about Nissan’s goals and direction followed by a look at the product is all that is necessary when the product is right.

We chatted with one of the so-called bimbos over some ham at the Maserati booth. Actually, she was bright and charming, only 19 but strikingly lovely, an country girl. She owns her own insurance company. Her employees run her company whenever she wants to do a modeling gig for two weeks, because, she admits, insurance can get dull. How smart is that? And, she lives at home. “My dad’s old-fashioned. I‘ll live at home until I get married,” she said. Her sister just left at 31.

But why doesn’t she look both smart and beautiful? Oh right, it might intimidate the Bobs and Dicks who can’t seem to get their own business right.

Of course, anyone who has ever been to the auto show knows has lots of catching up to do. There the girls come in packs wearing identical miniskirts, all incredibly young. Is high school on recess? They even have names. Who could ever forget “The Toyota Pretties?”

The more things change, the more they remain the same. Or maybe when business gets tough, the tough regress. Thank goodness I’m blonde.--Kate McLeod

Review update: 2022 Subaru Outback Wilderness gives the people what they want
Comments (0)
Commenting is closed for this article
Contribute
Send us a tip Comment Contact the editor
Follow Us