Chrysler Group on Monday restructured its marketing department in a way that more clearly separates brand marketing from product planning, and is designed to elevate how consumers view the Chrysler, Dodge, and Jeep brands relative to the competition, especially Asian rivals.

"These appointments will keep our focus laser sharp on the brands as we support the record number of product launches in the works for the Chrysler, Jeep, and Dodge brands," said Murphy.

Chrysler has been enjoying a good run of profits and market share gains, especially when compared with GM and Ford. But research done internally, and by outside firms such as Strategic Vision, shows that Chrysler, Dodge, and Jeep brands are still held in comparatively low esteem relative to domestic brands such as Ford, Chevy, and Buick, and well behind Asian brands like and Honda. With new designs such as Chrysler 300 garnering praise and positive momentum, Chrysler is trying to engineer comebacks for the images of its brands as well. The shakeup and reorganization of the marketing ranks follows the departure of Chrysler's high-profile director of marketing communications Julie Roehm, who directed a lot of the company's recent advertising efforts, including the successful campaign around the HEMI V-8 engine. -Jim Burt

In an even happier ending to a story first reported by the New York Times, the owner of a stolen 1968 Corvette Convertible will get GM's help to restore the car, with which he was recently reunited. Alan Poster is the owner of the 1968 'Vette, which was stolen from him shortly after he bought it 37 years ago. Last week, the Times reported that Poster had recovered the car shortly before it was to be shipped out of the country to a new owner in . On hearing of the story - and the car's lack of transmission, gas tank, and carburetor and need of new paint - GM Restoration Parts and Chevrolet gave him a $2500 credit to put toward restoring the car with genuine Corvette parts. Poster told the paper he would restore the car and give it to his 17-year-old daughter.

2004 Chrysler Pacifica by TCC Team (3/10/2003)
Expanding the crossover/wagon/SUV argument one niche at a time.

The new Mustang is ringing Ford's financial bells - and now the 'Stang is ringing cellphones at the world's number-three automaker too. Ford is set to release a set of ringtones inspired by the pony car: one is a version of the Star-Spangled Banner as rendered by the Mustang's exhaust note; the second is the sounds of a Mustang running through the gears. The two free ringtones are available now at www.fordvehicles.com. Computer wallpapers are available at the site as well, showing off the GT convertible, the hardtop GT, and the Mustang pony logo.

TCConfidential: Buick's Got a Brand New Bag for Tiger 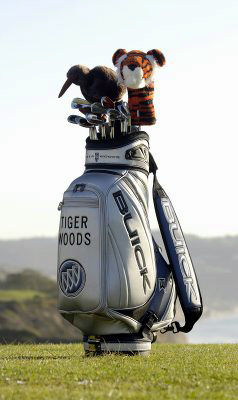 Tiger Woods walked out of the Buick Invitational championships this week in with another title - and with a new golf bag designed by Buick with his personal touches. The blue-and-silver golf bag is plastered with Tiger's name and the Buick logo, and was made by Nike. With his original bag, Tiger won 31 PGA tour events and earned almost $45 million in winnings - including four Buicks, the prizes for the brand's namesake golf tournament.

Ford's arm is working on a new version of its EcoSport SUV, but the new larger vehicle isn't staying at home - it's headed to the To be engineered in , the new EcoSport will be built in . Basic development costs in are very competitive; an engineer's salary is about one-third of what is paid in more developed countries. The existing EcoSport shares the basic architecture of the current Fiesta subcompact and has been a huge success in Latin countries where it is sold. Its current size approaches that of the Ford Escape and Mazda Tribute, so the increased dimensions will make it a ready replacement for those aging crossovers. -

In spite of excess capacity and continuing losses here, it clearly seems that Renault will choose to concentrate efforts in countries like , leaving , the world's second market, in waiting mode. In the next February 9th, in , the company's new CEO, Carlos Ghosn, will announce the world plan for the French make, pointing to a set of clear and bold goals, as it has been done already with excellent results at Nissan, where he is the top officer also. Things seem to be seized in , where Renault has settled in 2002, but no car has been produced so far. The expectations are, in addition to push Renault in , to go for expansion in , a more predictable and less risky market in relation to Chinese operations.

Land Rover North America today launched an all-new marketing campaign - "Designed for the Extraordinary" - intended to entice potential customers into the world of Land Rover: sophisticated yet rugged, luxurious yet authentic, as only a Land Rover can be. The campaign focuses on what differentiates Land Rovers from other luxury vehicles offering exceptional design and outstanding breadth of capability.

"Designed for the Extraordinary" showcases the brand as a whole, highlighting each individual nameplate - Range Rover, Range Rover Sport, and LR3. To reinforce each vehicle's personality in an unusual manner, Land Rover is placing vehicles in settings that feature genuine demonstrations of superior performance.