The war of words over the bankruptcy filing at Delphi is heating up, with UAW leader Ron Gettelfinger calling the supplier’s proposed wage cuts “ridiculous.” The Associated Press reports that Gettelfinger would not reveal the content of the latest Delphi wage offer to the United Auto Workers union, but only would offer that, “It’s ridiculous. They know it’s ridiculous.” Delphi has been pressing the union to agree to drastic cuts in salaries and benefits as it tries to steer its way out of bankruptcy court; reports in Detroit have suggested Delphi is asking for a base hourly pay rate of $10, from the $27 an hour those workers earn today. The union could strike at the supplier, which would leave Delphi’s biggest client GM without parts at a critical juncture in its own turnaround plan. GM spun off Delphi from its own operations in 1999 and could be liable for up to $10 billion in pension costs should the supplier dump its benefit plan in the bankruptcy court.

An agreement forged between the National Highway Traffic Safety Administration (NHTSA) and nine major automakers is expected to mitigate the effects of accidents in which pickup trucks and SUVs strike lower-riding passenger cars. USA Today reports that the automakers have agreed to strengthen and install beams in the front ends of new trucks and SUVs starting in September 2009. The "blocker beams" are used to make the crash structures of the two different types of vehicle more compatible, directing crash forces into the structure of cars. The agreement also will trigger a new round of studies that will examine how to further reduce injuries in car-truck accidents.

Recall, Rollover, and Safety Info by TCC Team (10/17/2005)
Search the government's databases for safety info on your car.

Jaguar dealers do the best job of satisfying new customers, according to J.D. Power’s new Sales Satisfaction Index Study. For the second year in a row, the company ranked first in the Power study that examines all aspects of the dealership experience, from sales personnel to finance. Jaguar scored 889 out of 1000 possible points; last year’s co-winner Lexus finished a point behind at 888, while Buick and Porsche shared third place at 878. Most improved in this year’s study, Power says, is Toyota’s Scion brand. Some of the problems buyers experience when shopping — problems that can lower a brand’s score — include not finding vehicles with the features they want, or buying a vehicle with more features than they like due to availability. Power also reports that buyers who spend more than an hour at the showroom are significantly more unhappy with the experience than those who clock in at less than an hour. This year’s survey tallied votes from more than 37,000 new car buyers who bought their vehicles in May of 2005.

Ford’s counterpunch to GM’s “Red Tag” sale will be simple — in word and in deed, the company promises. The “Keep It Simple” incentive will offer a single national discounted price on all its remaining 2005 and most of its 2006 models. Excluded from the new deal are the ’06 Fusion/Zephyr/Milan triplets, the Mustang, and the GT supercar. Like the GM plan, Ford’s deal expires January 3.

About 225,000 new Ford vehicles, including the company’s new Freestyle/Five Hundred/Montego full-size sedans and crossover, will be recalled. In the first recall, the vehicles have fuel-tank straps that could break, causing the fuel tank to rest on the vehicle’s driveshaft or exhaust system, which could in turn result in a fire. In the second recall action are the 2005 versions of the Crown Victoria/Grand Marquis sedans and the Lincoln Town Car. Those vehicles will be recalled for a bad battery cable that could be frayed by an attaching bolt, leading to fire.

Meanwhile, Ford’s Volvo brand has reached a deal with California transportation officials to extend the warranty on more than 350,000 vehicles with defective throttles. The Associated Press reports that the throttle on some Volvo models can become corroded, leading to slowdown and a loss of power. Volvo will warrant the part for up to ten years or 200,000 miles in a deal with the California Air Resources Board, which sets emissions policies in the Golden State. The AP reiterates that the action is not an official recall, though a Volvo spokesperson said up to 94 percent of affected vehicles could experience the problem during the warranty. Vehicles included in the California-only action include the 1999-2002 C70 coupe and convertible; 1999-2000 S70, V70 and V70SX wagons; 2000-01 V70, V70XC, and S60 models with turbo engines; 1999-2001 S80 sedans; and 2000-02 V70 and S60 models with non-turbo engines. 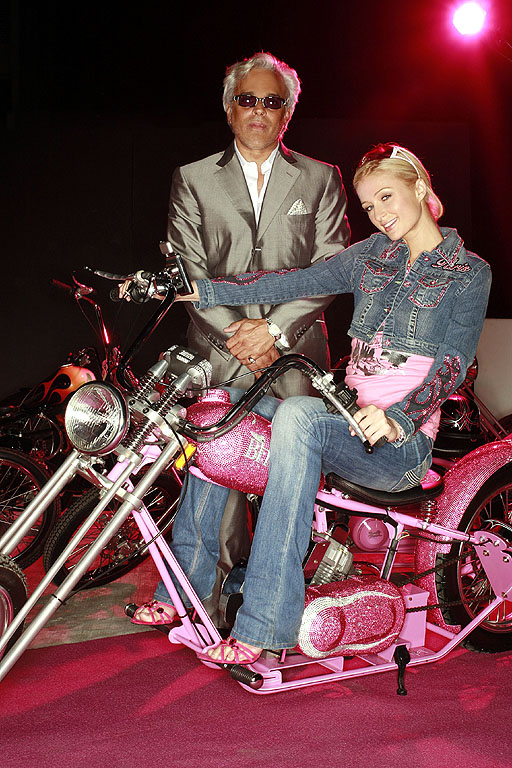 In the reality-TV "garage" genre, the stupid-expensive custom bike reigns supreme. The Teutels might be the most media-savvy of the bunch so far, with their Orange County Choppers and bikes made out of copper from the Statue of Liberty. But the dark horses at Beverly Hills Choppers are trying to trump them with a single PR stunt worth $250,000.

The west-coast crew's quarter-million PR pitch is a custom chopper that now belongs to press vampire Paris Hilton. You know her last from a minor scrape in her Bentley Continental GT captured on widely circulated Internet video and, well, other widely circulated videos. The Beverly Hills Choppers squad built the bike for Hilton and as a pitch for a new reality show, Son of a Gun, being shopped around town.

The stats? The bike's encrusted with more than 100,000 Swarovski crystals - basically, rhinestones - that also spell out "" on the bike's gas tank. The tank cap doubles as a compact mirror, we're told.

Fittingly, the six-hp, two-stroke bike hits 70 mph in a single forward gear - fast enough to avoid paparazzi on foot, slow enough to not miss a single storefront on Rodeo Drive.

We applaud the PR moxie of Johnny Lew Fratto and his bike outfit - and simultaneously kick ourselves for buying into the Paris Hilton glitterati car wreck. And we now return you to your regularly scheduled programming - which won't include The Simple Life, if we can at all help it. 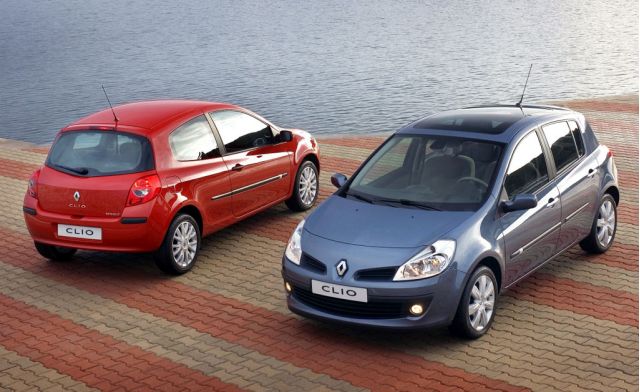 Along with its new Car of the Year title in Europe, the new Renault Clio has also earned another feather in its cap: a five-star rating in the Euro NCAP crash tests.
And soon, the Clio will be available with a new Sleep Safe head restraint for children based on the HANS device used in Formula One racing.
In the past ten years, the chance of surviving a major crash in the front seats has dramatically improved, but 70 percent of deaths and injuries are suffered by rear passengers in vehicles; those passengers are often children. Over 30 percent of rear seat passengers involved in accidents in Europe are children under the age of ten.

One of Renault’s safety engineers, watching F1 drivers putting on their HANS devices before a race, thought something similar would be perfect to hold children upright should they fall asleep and protect the head during a side impact.
In Formula One, the HANS device protects drivers against the high forces during a high-speed accident. The extra weight of the helmet causes immense strain on the neck of the driver and HANS provides extra support to the head and neck, reducing whiplash in a front or rear impact and cushioning the head in a side impact.

Like the racer’s helmet, a child’s head is large compared to its body, and likewise puts extra strain on its neck during a crash. Too, children from six to ten years are too big for child seats and often, too small to reach the head restraint in the car. The HANS-like device addresses those problems — as well as the problem of children sliding out of a seatbelt when they fall asleep.

The Sleep Safe is part of the middle head restraint and is already available for Renault’s people-mover Espace. It will soon be available for the Clio and other models. —Henny Hemmes

Ford Motor Company (NYSE: F) today marks full-scale production of its second hybrid vehicle at the Kansas City Assembly Plant.  The new Mercury Mariner Hybrid SUV continues the company's commitment to increasing hybrid production ten-fold — to 250,000 units annually — by the end of the decade. Lean and flexible manufacturing processes and specially trained employees at the plant allow the hybrids to be built on the same production line as conventional Mariner and Ford Escape SUVs. Mariner production was pulled ahead by a year as part of Ford’s stepped-up hybrid commitment. The Mariner joins the Escape Hybrid as two of five hybrids Ford will have on the road in the next three years. Ford today is the only American automaker with a hybrid on the road and was the first in the world to offer a hybrid SUV.