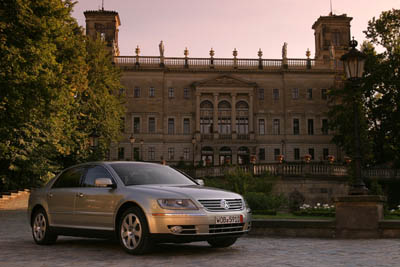 The $70,000 Phaeton sedan will exit Volkswagen's sales lineup early next year as the German automaker realigns its future product plans with the vision of its new leader, former Chrysler exec Wolfgang Bernhard. The Phaeton move will also reconcile VW's lineup with the reality on the ground: sales have been a trickle since the Phaeton was introduced in 2003. The ultra-expensive Volkswagen was to have led a charge up the price ladder for the brand, but the company ran into serious resistance from buyers who are buying BMWs and Mercedes-Benzes in record numbers. With VW's sales down 17 percent, the company is spending its money more wisely on new variants of the Golf, including a coming crossover based on the entry-level vehicle and a new Eos hardtop convertible due out next year.

Audi is adding a V-6-powered, DSG-gearboxed, quattro-all-wheel-driven model to the A3 lineup this month. Dubbed the A3 3.2 quattro S-line, the new version will wear a sticker price of $33,980 at Audi showrooms. Its 3.2-liter engine turns out 250 horsepower and also puts out 236 pound-feet of torque, and accelerates from zero to 60 mph in 5.9 seconds, thanks to the six-speed DSG gearbox. The suspension's been retuned for sporty handling, and five-spoke, 17-inch alloy wheels with 45-series tires are standard, while 18-inch wheels and 40-series tires are optional. The A3 3.2 quattro S-line also gets a restyled front bumper, fog lights, a roof spoiler, special badging, and a leather interior as well as a Bose audio system with a six-disc, in-dash CD changer.

General Motors is turning to discounted prices once more to clear inventories of 2005 and 2006 models from its lots. The company's new "Red Tag" promotion, dealers will put maximum prices on vehicles that will reflect reductions on prices of anywhere from a few hundred dollars to $4400 on some models, the Detroit News calculates. The program, which does not include Cadillac, Saturn, Saab, or HUMMER vehicles, will run through January 3.

The National Highway Traffic Safety Administration (NHTSA) is studying reports of airbag problems in the Chrysler Group minivans. The 2005 model-year vans, the NHTSA reports, could have front airbag sensors that fail, possibly due to corrosion. The agency has logged five complaints from owners who say their airbag sensors failed; the sensors for the front airbags are located behind the front bumper, and owners have reported the warning light for the front airbags had illuminated in their vehicles. More than 400,000 minivans are being studied; if enough evidence is presented, the safety agency could order a full recall of the vehicles in question.

The National Highway Traffic Safety Administration (NHTSA) has begun an investigation into recent versions of the Mercedes-Benz S-Class for a potential problem with the vehicle's gauges. The Associated Press reports that the S-Class sedans from the 2000 and 2001 model years are the subject of complaints to the NHTSA that their speedometers and fuel gauges have failed to light. Seven complaints have been logged with the agency, and 72,000 S-Classes are being investigated for the problem, which could become a full recall if the agency determines the problem to be a flaw in the vehicle's design.

BMW North America selected GSD&M, Austin Texas as its new ad agency after a four-month review that began with over 100 agencies seeking the business.

BMW's director of marketing Jack Pitney, who gave the news to the media late Monday, did so with German oompah music on in the background. GSD&M, who at one point handled the Land Rover business during the time BMW owned the brand in the late 1990s, will handle all phases of the BMW business include event planning and media. The agency replaces Minneapolis-based Fallon Worldwide, which was perhaps best known for creating the successful BMWFilms campaign.

The company will keep "The Ultimate Driving Machine" slogan and positioning, according to BMW. But, according to a brief/memo to agencies obtained by TCC, the German carmaker sees itself not reaching enough consumers who will consider BMW. Said the brief: "How can BMW expand the current customer base? How do you get the people who admire BMW, who possess BMW values, who possess the BMW gene - but don't place BMW on their shopping list - to place BMW in their consideration set? In sum, how do you get them to want something they don't consciously want to own? How do you arouse that latent desire? In addition, how will you convince those who purposely choose not to buy BMW because they think the brand is 'too cold,' 'not luxurious,' or 'not relevant'?"

GSD&M's first work will debut in the spring. Agencies were asked to come up with a strategy for launching the 3-Series coupe as an exercise, and so that may be the first work that hits the air, magazines, and the Internet.

GSD&M, Austin is perhaps best known for its work for Wal-Mart, Krispy Kreme, and Southwest Airlines. The agency's CEO, Roy Spence, is also known for his work for Democratic Party campaigns and candidates, including former President Bill Clinton.

GSD&M bested three other agencies who were picked as finalists: based Kirschenbaum Bond + Partners and Anomaly, as well as Richmond, Va.-based The Martin Agency. Last Friday, BMW narrowed the search to Kirshenbaum and GSD&M, and has spent the last week haggling over costs and compensation issues. It's possible, said one source, that GSD&M offered BMW a favorable cost structure given its lower-cost operation in , compared with agencies.

BMW spent about $160 million in total ad expenditures last year, including dealer co-op spending, with about $70 million in national advertising. Pitney says the spending is going up, but not necessarily in TV and print advertising. Pitney, who came to BMW after running MINI USA, is a big believer in viral and buzz marketing.

GSD&M has won BMW's national brand and product marketing, but will be competing for the various dealer co-op accounts around the country. -Jim Burt

For the first time in the video game industry, a car company has built a driving game around its entire brand with the release today of "Volvo Drive for Life," a game published by Microsoft for the Xbox game system. Prior to the launch of "

Volvo Drive
for Life" on Xbox, companies - including Volvo - had participated in video games by inserting their products into an existing game platform. The new Volvo video game was designed to immerse the user in Volvo's most important core value, safety, while participating in an exciting gaming experience. Everything within the game, from the cars to the surroundings, is modeled from scratch to create test tracks and driving environments that illustrate the strengths of the active safety features of each vehicle represented in the game. Players will experience firsthand the benefits of Volvo's world-class safety features such as Dynamic Stability and Traction Control (DSTC), Four-C Chassis, and Roll Stability Control (RSC), while testing their skills in the challenging game environment.