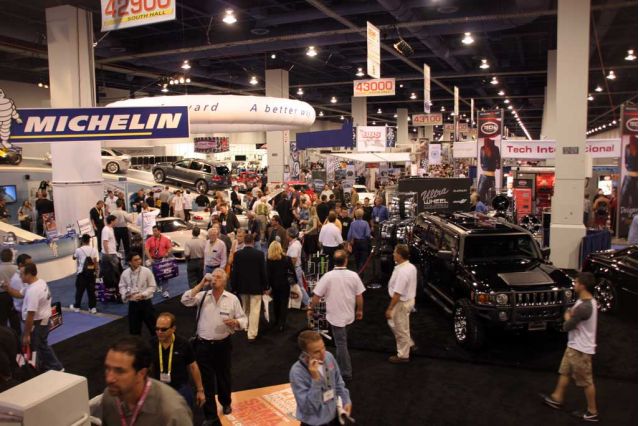 It's the era of customization, and the numbers show that American motorists are spending record amounts to personalize their vehicles. Retail spending on products sold by members of the Specialty Equipment Market Association hit $31 billion last year, a 35-percent increase in five years, noted SEMA Director Chris Kersting. And despite a softening economy, most observers expect the trend to continue. An estimated 120,000 people will walk through the annual SEMA show in this week, a far cry from the 3000 who attended the first aftermarket event, held at Dodger Stadium in in 1967. This year's show will feature 20 percent more products than in 2004. They fall into four broad ranges: tires and wheels, performance parts, body and appearance accessories, and the increasingly popular in-car electronics. Systems like video players, satellite receivers, and navigation devices underscore Kersting's comment that the SEMA show "is a significant barometer of consumer trends."

Volkswagen, meanwhile, made news in a variety of different ways during the opening session of Aftermarket Week. The German automaker put in its first appearance at SEMA, for one thing. That's belated, considering VWs have always been popular platforms for customizers, dating back to the days when Beetles were given Rolls-Royce grilles or transformed into dune buggies. Company officials noted that they are rapidly expanding the number of parts available from the factory. Last year saw record sales of $690 million, said aftermarket manager Charlie Lewis, "and the stage is set for another record-breaking year."

VW used its stand to roll out a trio of performance-tuned products that just might show up in the automaker's lineup in the not-too-distant future. These included a more aggressive looking version of the carmaker's SUV, dubbed the Touareg R-GT, which was lowered, given 22-inch wheels, and bumped up to 500 horsepower. Inside, it featured a Bugatti spun-aluminum trim kit and matching his-and-her iPods. 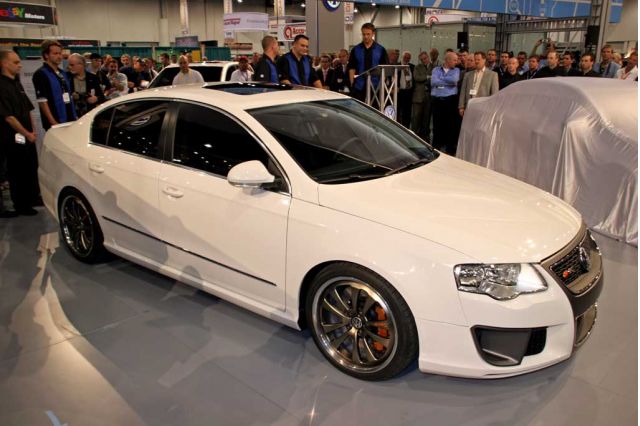 VW applied the R-GT designation to a 535-hp version of the Passat, which racer and project car specialist Townsend Bell dubbed "an M5 killer." The candy-white Passat featured an aggressively reshaped nose, with flush bumpers and a new fascia, 19-inch titanium anodized wheels and an integrated rear spoiler. Top speed? Figure something over 190 mph. 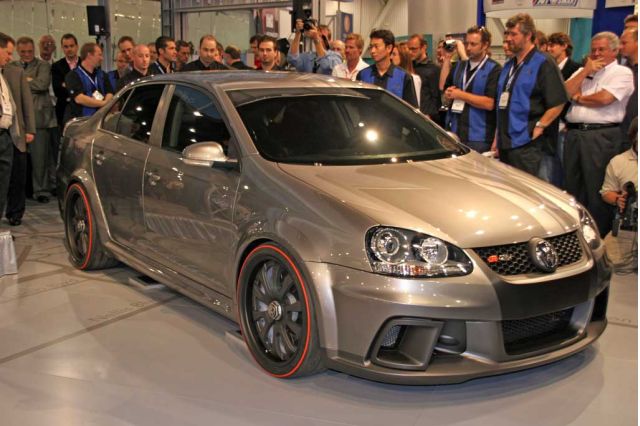 The third project car was the Jetta R-GT. This "sinister" interpretation was outlined in ghost graphics and ground effects. Track ready, it featured a full roll cage surrounding Recaro seats. Based on the new Golf R32 platform, the Jetta R-GT's track was widened for improved performance and handling - which would also be enhanced by full-time all-wheel drive, according to Townsend.

Will the R-GT models make it into production? There's a growing likelihood they will at least influence some future members of the VW lineup, suggested Adrian Hallmark, himself the third big news item at the automaker's stand. Tuesday marked the British executive's first official day as head of Volkswagen, where he replaced Len Hunt, who left for Kia. Hallmark hinted there could be significant changes coming at VW in the near future, as it moves to improve its position in the market. Critical to the turnaround will be getting a handle on quality and reliability issues. But equally important, "if you make products to suit the market, the market will accept you," he said. That means VW can no longer simply rely on models designed for European tastes and needs. It will have to start producing vehicles specifically designed for . That is the most obvious result of the automaker's Moonraker Project. VW took a variety of designers, engineers, and marketing experts and in a move that resembled a TV reality series, moved them in together in to meet with consumers and get a better read on the market. The 18-month Moonraker Project will wrap up at the end of this year, and it will take some months to fully digest its findings, but Hallmark stressed, "(VW's corporate headquarters) is listening." How soon might new products appear? "It won't happen in a year," Hallmark cautioned, but he added that the goal is to move fast.

Leif Tufvesson admits that the Volvo project hot rod is likely not going to meet the tough safety standards Volvo normally sets for itself. But it certainly has folks wondering just how far you can stretch the brand, which once stood for solid, but boring, box-like styling. The hand-built T6 gets its twin-turbo six from the S80 mounted in the back, a five-speed Geartronic automatic sending power to the rear wheels, and a rear decklid that automatically rises as the engine temperature does, to keep the whole array cool. Volvo built the T6's body around a tubular-steel frame and used the subframes from the S80, and crafted new control arms for the front and rear suspension. Front six-piston brakes are new, but the rears are S80 discs; the front wheels are 20-inchers, while the rears are 22-inchers. Tufvesson, who has designed a number of concepts for Volvo, said that while the T6 may not be as safe as an S80, it is still a lot more like a real car when driven on the highway. Most hot rods look good, he stressed, but are a real fright to drive.

Ford Funks Out With Flex - And Bill Gates?

Ford took its moment in the SEMA spotlight to try to appeal to all aspects of the aftermarket. That included the announcement of a new join venture with Microsoft and Stargate to produce a wireless, portable computer that will be offered to F-Series owners, starting in 2006. The unit is a do-all system that can store data, send e-mail, write and print invoices, swipe credit cards and check inventory, "without your having to drive back to the warehouse," said Ford division marketing manager Marty Collins. 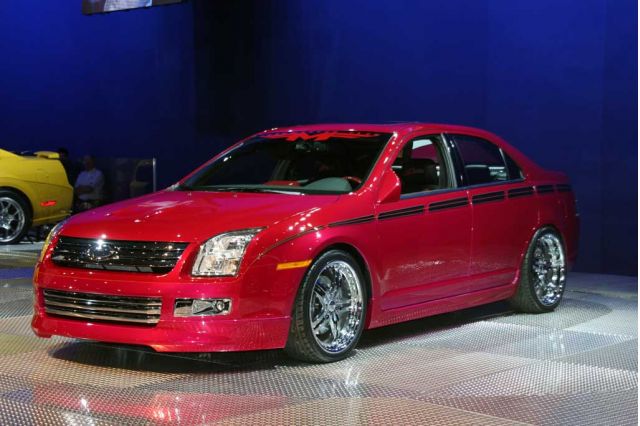 For something with a little more edge, the automaker turned to hip-hop tuner king Funkmaster Flex. "From the first time I saw the Fusion at Ford's design studios, I liked what I saw. The car looked hot," said the famed DJ. The tuned version of Ford's new sedan featured a 3D Carbon two-tone red paint scheme with an edgy Street Scene grille and Boze alloy black chrome three-piece wheels. There were no mirrors on the car: the Funk Fusion uses video cameras with large monitors surrounding the driver. The interior featured a matching two-tone dashboard and ostrich accents. 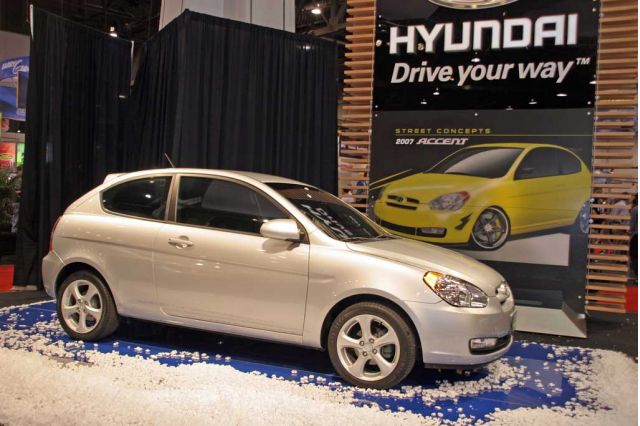 Like Kia, its sister division, Hyundai is pushing hard to connect with the tuner and hip-hop crowd, said brand development manager Justin Osborne, in order to "build the buzz." But it used its SEMA news conference to reveal the 2007 Accent three-door. "Right out of the box, this will be an excellent vehicle for customizing," said Osborne, noting there will be an array of aftermarket parts available at Hyundai showrooms. The '07 model features a 110-horsepower 1.6-liter four that will also appeal to the growing market for fuel-efficient vehicles. On the safety side, the three-door will come with six standard airbags, as well as four-wheel disc brakes with ABS. "This is a return to Hyundai's roots," declared Osborne, though he declined to set a specific price tag on the new model.  But another company official hinted the three-door will likely be positioned as a price leader, starting a bit under the $11,500 base for the four-door Accent. Look for a spring 2006 debut.

Mitsubishi Hones the Art of Ralli

Mitsubishi will finally bring its Ralliart performance products to the market, the Japanese automaker announced at SEMA. "It allows us to apply the lessons we've learned in racing to the street," said Wayne Killen, vice president of marketing. A full line of aftermarket accessories should be available at dealers by spring 2006, he noted. Meanwhile, Killen revealed that a production version of the Gallant Ralliart Concept vehicle - which made the auto show rounds this year - will be put into production. A final version will be shown at a "spring 2006 auto show," he hinted. 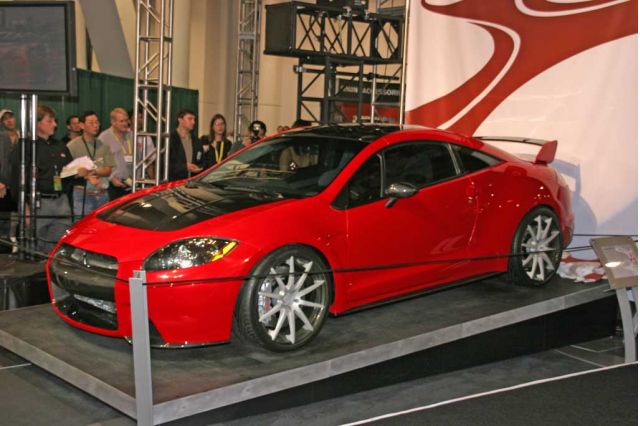 Could the Gallant Ralliart be a sign of things to come? There's a strong possibility, based on Mitsubishi's SEMA newser, where it rolled out two more concepts wearing the performance brand's badge. The Ralliart Eclipse featured extensive use of carbon fiber body panels as part of the push to shave weight off the standard Eclipse model. Performance was also enhanced by boosting engine output to 400 hp. That was channeled through a new six-speed, short-throw gearshift to an all-wheel-drive powertrain. The Ralliart Eclipse featured 20x9 carbon fiber wheels, with plenty of stopping power, thanks to front eight-piston Brembos and four-piston rears. The show car was painted in hot mica red. Inside, the concept featured Recaro seats with four-point harnesses, and a Rockford Fosgate audio designed to keep you awake on a long drive. 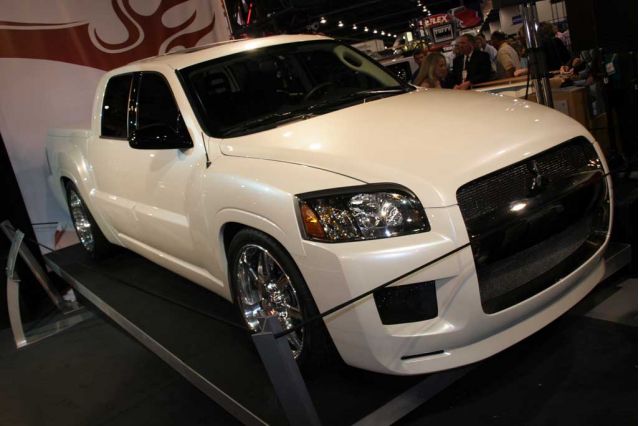 Meanwhile, the Ralliart Raider Concept started off with Mitsubishi's all-new pickup, transforming it into a serious race truck, with a custom tubular chassis, and a carbon fiber body. A twin-turbo 4.7-liter V-8 put power to the ground through a full-time all-wheel-drive system driving 22-inch wheels and tires. Are the two show cars buildable? "There are some possibilities here," suggested Killen, though he cautioned that as shown at SEMA, the two prototypes would be "very expensive." Individual elements of the cars could, however, make it into production, or at least into Ralliart accessories.