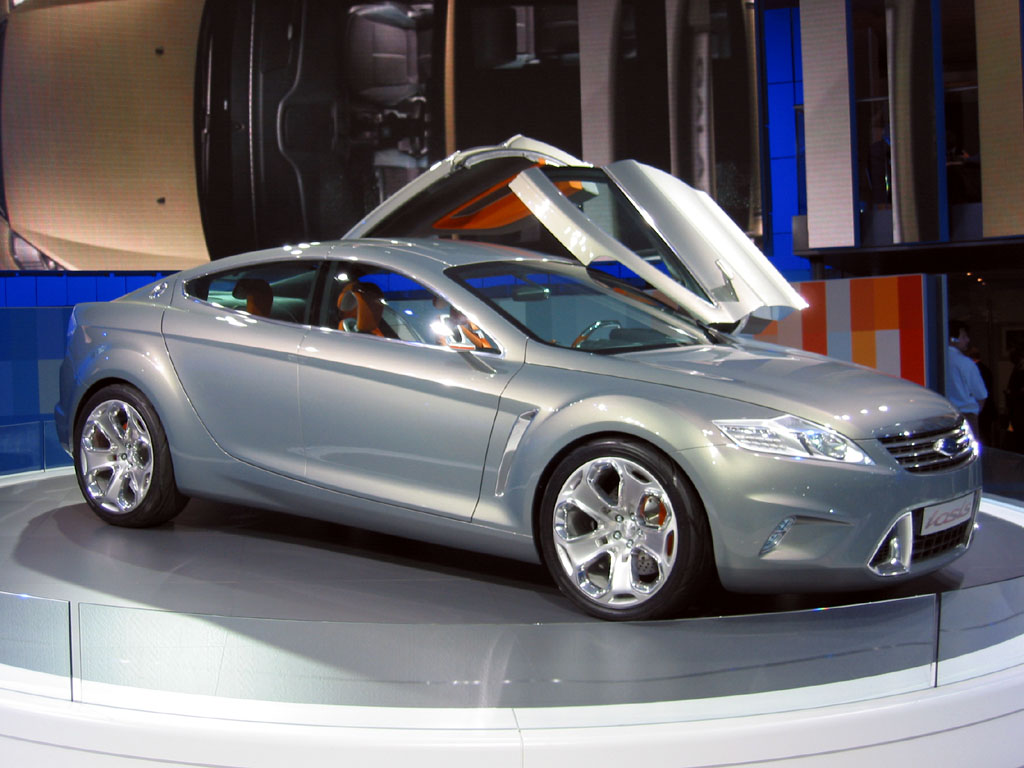 Is the iosis the shape of things to come from Ford? The sleek and muscular gull-winged concept car Ford unveiled at the Frankfurt Motor Show last week isn’t likely to hit showrooms anytime soon, company officials caution, but it’s likely to have a serious impact on a company often accused of falling back on boring design.

“There will be no more timid cars” from Ford, the automaker’s chief operating officer, Jim Padilla, told TheCarConnection.com during a discussion in Frankfurt. That message was echoed over and over during interviews with senior Ford managers, including the carmaker’s design director, J Mays.

In a candid assessment of the work done since he joined Ford seven years ago, Mays admitted his team “has made some mistakes. We’ve been too conservative, and as a result, we’ve been criticized for being too bland.”

In terms of styling, the work done on products like the full-size Five Hundred sedan “definitely doesn’t deserve an ‘A,’” though critics would probably question the “B+” Mays then assigned himself. Quibbles aside, Mays made it clear he’s heard critics’ concerns, and will be pushing closer to the edge of the envelope over the next few years.

Exactly why Ford has missed the mark isn’t quite clear. When Mays joined the automaker, it was putting its bets on the striking, if controversial, “New Edge” look, introduced in the form of the last-generation Mercury Cougar. The crisply angular appearance generated plenty of looks, but after a brief spurt, sales collapsed. And with top officials, including Chairman Bill Ford, increasingly worried about the automaker’s weakening bottom line, the emphasis shifted to safe, if bland, shapes.

“You can’t totally blame design, if that’s what management was asking for,” cautioned Jim Hall, senior analyst with the consulting firm AutoPacific, Inc.

Unfortunately, the been-there-done-that look of products like the Five Hundred and Freestyle crossover vehicle has failed to capture the public’s imagination, even though the vehicles have received overall praise from the automotive media.

In an increasingly crowded market, there is no choice but to try to stand out, emphasized Mark Fields, currently head of the Premier Automotive Group, and the man slated to take control of Ford’s core Americas operation next month.

"Design will absolutely be a differentiator in the years ahead," said Fields, in Frankfurt.

With this new mandate, Mays has gone back to his roots. First, he shifted his base of operations to Ford’s global design studios in London, not far from where he first made a name for himself. Mays joined Ford soon after Volkswagen launched the New Beetle, on which he was lead designer. Mays also was a key participant in the development of such well-received vehicles as the Audi TT roadster.

But during those days in Germany, he worked closely with the brilliant Freeman Thomas, who then went off to work for DaimlerChrysler. Mays recently lured Thomas and several other former colleagues over to Ford, including Martin Smith. The British designer is often credited as the “pen” behind the Audi Avus, often billed as one of the most beautiful concept cars ever developed. Smith was also the man in charge of Audi’s transformation into an industry leader in interior design.

“Everybody who makes up my design operating committee is an old college drinking buddy of mine,” Mays said with a smile. But the long-term familiarity of the team’s senior members is good for more than laughs. Insiders say there’s little formality when the group gets together.

“We’re willing to be sharply critical of each other’s work,” Smith suggested, but also “quite supportive.”

Mays cautioned that Ford won’t be able to turn its design reputation around overnight, not with the long lead, or development, times that characterize the auto industry. But it’s equally clear that senior management isn’t content to wait.

“On my first day on the job, (Ford of Europe Chairman) Louis Booth told me he wants drop-dead gorgeous cars,” recalled Smith. “’Anything else,’ he said, ‘and you’re out of here.’”

With its voluptuous shape strikingly reminiscent of the new Aston Martin V8 Vantage, the iosis concept on display in Frankfurt will likely never reach showrooms, explained Smith. But its “DNA” will be visible as Ford of Europe puts an emphasis on products designed to look both expensive and fun-to-drive. The newly-updated Galaxy minivan is the first European vehicle bringing elements of the iosis to market, noted Smith.

In the U.S., the Ford brand won’t be quite as expressive. For American buyers, the design theme will be aimed at underscoring the long-time marketing tagline, “built Ford tough.” Among the more visible styling cues will be the bold three-bar grille that recently debuted on the Ford Fusion sedan.

Meanwhile, Mays promised to better differentiate Ford’s various U.S. brands. Today, it’s often difficult to tell the difference between a Ford Five Hundred and a Mercury Montego, or between a Fusion and the new Lincoln Zephyr.

Mays insisted there won’t be any backsliding. “If you’ve got everyone singing from the same song sheet, it says you’ll have to do great design” he asserted. He won’t have much of an option. If his team doesn’t deliver, consumers may not be so generous on the grading curve.