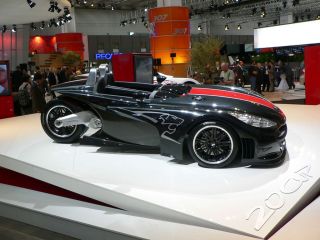 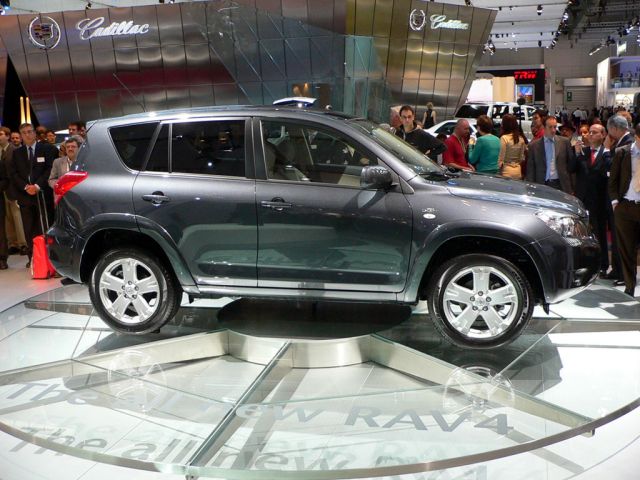 Toyota introduced the third-generation RAV4 on the stand. Although the model is popular in the States, according to it’s also ’s best-selling SUV.

The carlike SUV is now slightly larger on the outside, but interior space has been greatly increased, and says that the new configuration is more versatile. A new Easy Flat seating system allows, as the name suggests, a completely flat cargo surface when desired, without the need to remove cushions or headrests. The system also slides fore and aft to adjust rear seat space as needed.

An Integrated Drive System and VSC+ are now offered. Together, they coordinate the all-wheel-drive system, ABS, the stability control system, Electric Power Steering, and other electronics. The normal torque split with the Active Torque Control all-wheel drive system is 55/45 front/rear, but it can be varied up to 100 percent to the front. Hill-start assist control and down hill assist control are standard. And despite the increased dimensions, the turning circle has been reduced. 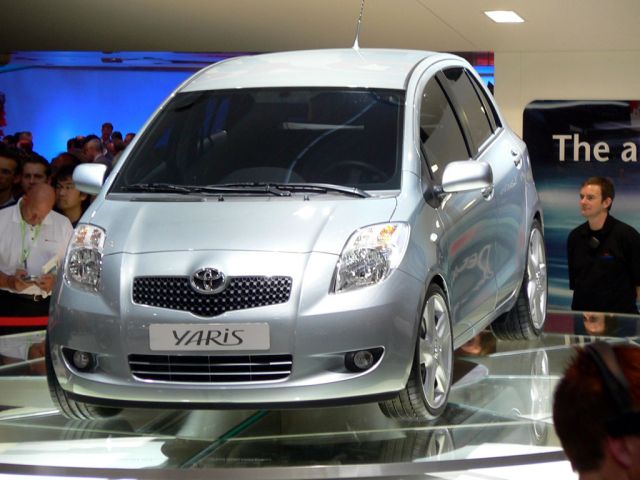 Toyota also introduced the next-generation of its Yaris, a hatchback model for the European market. With the design done by ’s European design studio, called ED2. The Yaris has slightly larger dimensions all around, and the packaging inside has been completely reworked. Easy Flat seating allows a more impressive cargo space with the seats folded, while a rear floor that’s flatter otherwise allows better comfort for the middle rear-seat occupant, says.

The Yaris is the first car in its segment with a knee airbag. ABS, Brake Assist (BA), and Electronic Brake-force Distribution (EBD) are also standard on all models.

Three engines are in the lineup—gasoline four-cylinder engines of 1.0 and 1.3 liters, or a 1.4-liter four-cylinder diesel—each paired to a five-speed manual gearbox. A new Multi-mode Manual Transmission (M-MT), which has either automatic clutch control or a fully automatic mode.

The U.S.-market Scion xA is related to the outgoing Yaris, and the Toyota Echo is built on the same platform. says the Yaris three-door and another body style will replace the Echo in the

In Europe, has seen its market share grow to 5.2 percent, and the automaker hoped to see 250,000 Yaris sales per year.

You might mistake the ENDO in conversation for the Enzo, but we don’t think you’ll get this puny city-car concept confused with the supercar. The ENDO minicar was conceived by ’s European design studio, ED2, and was designed for space efficiency, low emissions, and typical demands of the city driving environment. The ENDO follows a new “Vibrant Clarity” design concept, and the concept signals a change for toward “more animated” models. At only 118 inches long, the ENDO is seriously small, yet claims it can hold four occupants. A large glass roof is used overhead, while a screen-driven interface is the centerpiece inside. 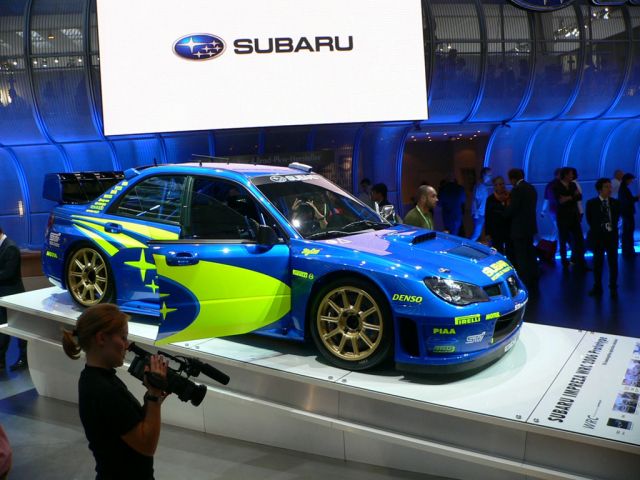 Subaru showed its family of slightly facelifted Imprezas — now boasting the new “winged boxer” grille, but the highlight for many motorsport fans was the first glimpse of the automaker’s next World Rally car. The WRC 2006 Prototype shows that Subaru is on course for the next rally season. Very little was said about the new WRC car, but it does have a reworked differential system. The team has reportedly been testing the new car, which was introduced in a video by Norwegian driver Petter Solberg. An FIA homologation package is scheduled. 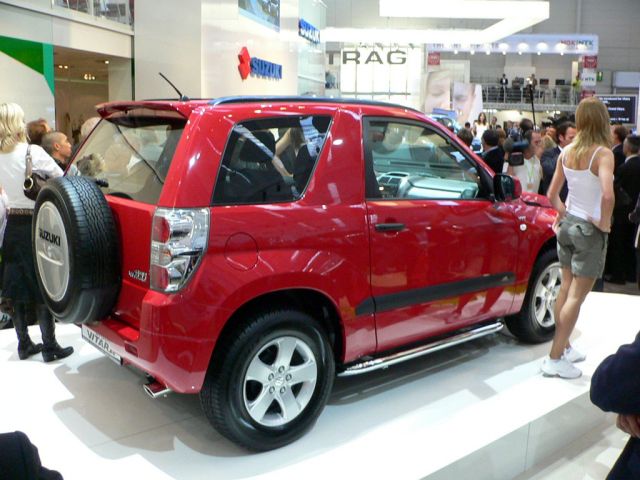 According to an address to showgoing media, Suzuki is revamping its marketing, to focus on buyers with the “go for it attitude…those who live life to the fullest at work or play…active energetic individuals…those who live life without letting it go by.” That’s all of us, sometimes, right? Along with the five-door Grand Vitara — and supposedly in that vein — Suzuki also introduced a short-wheelbase, three-door version, now calling it the Grand Vitara as well. The three-door is only about 157 inches long with a wheelbase of about 98 inches. For the European market, it offers either a 105-hp, 1.6-liter in-line four with variable valve timing or a 127-hp, 1.9-liter diesel in-line four, both with a five-speed manual and four-wheel drive. They also promise to be rugged, with unibody construction paired with a built-in ladder frame. It’s likely that the three-door Grand Vitara won’t be bound. 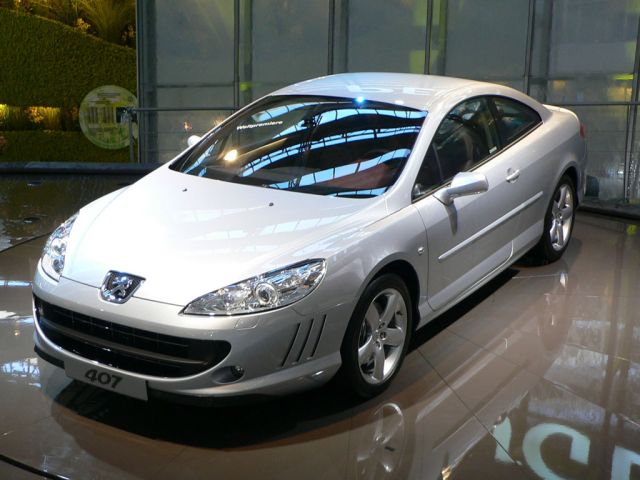 French automaker Peugeot unveiled the production version of its new-generation 407 coupe, which was shown in concept-car form at the lastshow. The new 407 builds on the “touring car tradition,” with seating for four — including buckets in back — and fine leather and aluminum appointments. The 407 is powered by either a 160-hp, 2.2-liter four, a 210-hp, 2.9-liter gasoline V-6, or a 205-hp, 2.7-liter turbo-diesel V-6 with particulate filter. Each of the engines can be paired with a six-speed manual or automatic transmission. Rear Structurally, the coupe uses the same platform as the sedan, though it’s been lowered by 44 mm and boasts a 25-mm lower center of gravity for improved handling. 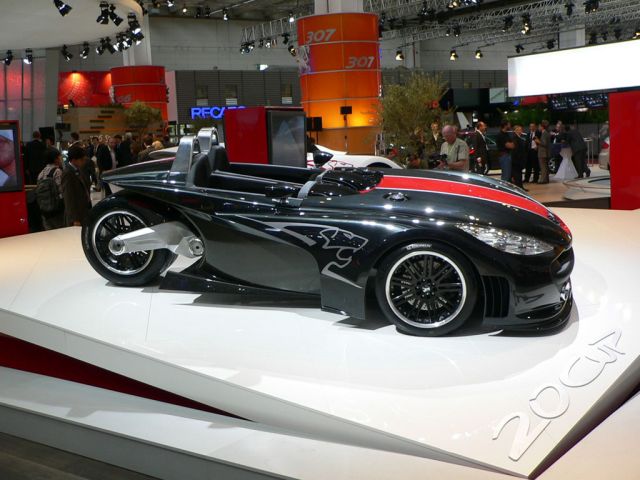 Also on show was Peugeot’s outrageous new 20Cup three-wheeled four-cylinder sports car. Developed as an inspiration from the company’s entrance in the Le Mans Endurance Series, the 20Cup two-seater has a one-piece carbon chassis and steers by the rear wheel from a pivot point. A four-cylinder engine provides about 170 hp, though a six-speed sequential gearbox. The 20Cup’s 1100 pounds is centered almost directly over the front wheels.
Tags:
August Body Frankfurt Auto Show Fun May 2005 Auto Shows
2021
The Car Connection
See the winners »
2021
The Car Connection
See The Winner and Nominees »