Times are tough at General Motors, but while the automaker had to shell out $2 billion to pay off former partner, Fiat, cancel product and platform programs, idle plants, increase project losses 50-fold and boost incentives to record levels, vice chairman Bob Lutz knows where to point the finger. The former Marine and one-time Chrysler president has been increasingly vocal in his criticism of what he deems unfair media coverage. He told a scrum of reporters that they are promoting “the myth of foreign supremacy” at the expense of domestic brands, unfairly suggesting that GM is in trouble. While Lutz didn’t deny that the automaker has some challenges ahead, he insisted they were far less serious than the import-biased press believes. “This is the third or fourth time I’ve seen this movie, and it gets less scary each time.”

Are Gas Prices Taking a Toll?

That was the subject of intense discussion among journalists and industry executives alike during the first press day at the 2005 New York International Auto Show. The definitive answer? “Maybe.” There seems to be general agreement that consumers are starting to pay attention to rising fuel prices, said Phil Martens, head of North American product development for Ford Motor Co. “It’s taken people time,” he said, “to adjust to the idea that this isn’t going away.” But while that’s “getting people to think twice before looking at exceptionally large engines,” added Paul Halata, CEO of Mercedes-Benz USA, so far, the actual impact on sales has been minor, at least at high-end brands. There’ve been some signs of a decline in sales of full-size SUVs and pickups in recent months, but nothing conclusive. And for good reason, insisted General Motors vice chairman Bob Lutz. The folks who typically buy those vehicles have annual household incomes running $150,000 and up. “Do they care if gas prices go from $20 to $40 a week?” Lutz asked, quickly answering for himself, “The answer is no. It makes more difference at the lower end of the market.” Even if manufacturers aren’t sure how to respond in the coming months to rising fuel prices, Ford’s Martens says it would be a mistake to ignore likely long-term trends. “The issue of fuel consumption will have to be factored into Ford’s product plans,” he stressed. The automaker doesn’t intend to walk away from its F-Series or Explorer models, never mind the new Shelby Cobra GT500. But going forward, Ford and many of its competitors expect to feel pressure to adopt more fuel-efficient technologies, such as lightweight materials, more aerodynamic designs, six- and seven-speed transmissions, even new hybrid-electric powertrain systems. 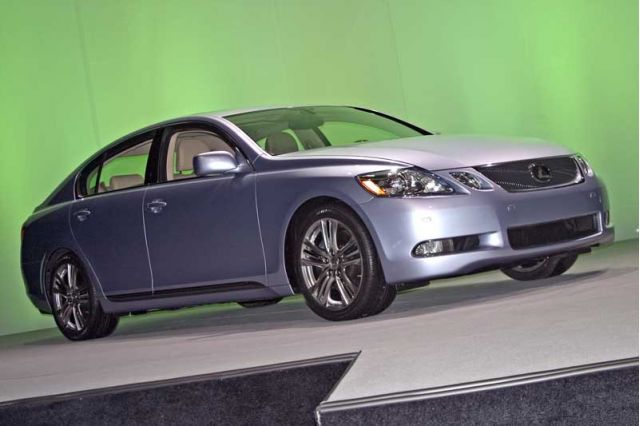 Lexus lifted the covers on a pair of new models during its spin in the New York spotlight. Clearly the most significant new entry is the GS450h. The prototype revealed at Jacob Javits Center will be a hybrid-electric version of the all-new sports sedan Lexus launched earlier this year. The 450 starts out with a 3.5-liter V-6, which is mated to a high-output electric motor. Together, they are expected to pump out “over 300 horsepower,” according to Lexus marketing manager Mark Templin. That should help the hybrid more than match the performance of the V-8-powered Lexus GS430, launching from 0-60 mph in less than six seconds. Company officials say the most noticeable improvement in performance will be felt at passing speeds, in the 30-50 mph range. The GS450h will be the world’s first luxury sedan hybrid, as well as the first rear-drive hybrid when it hits showrooms about a year from now. It will join the RX400h, the first hybrid-electric vehicle in the Lexus lineup. But according to General Manager Denny Clements, the two models may soon have plenty of company. Lexus is giving strong consideration to launching a brand-within-a-brand of high-performance vehicles, akin to Mercedes’ AMG line-up. The big difference, Clements told TheCarConnection, is that all the Lexus models would be hybrids. The Toyota division will closely watch the market reaction to the GS450h and RX400h to see if it should proceed with the hybrid performance project. Clements described the performance hybrid strategy as a “shield” against environmental concerns, promoting the idea of getting V-12 power with V-6 mileage.

Defining What IS Is 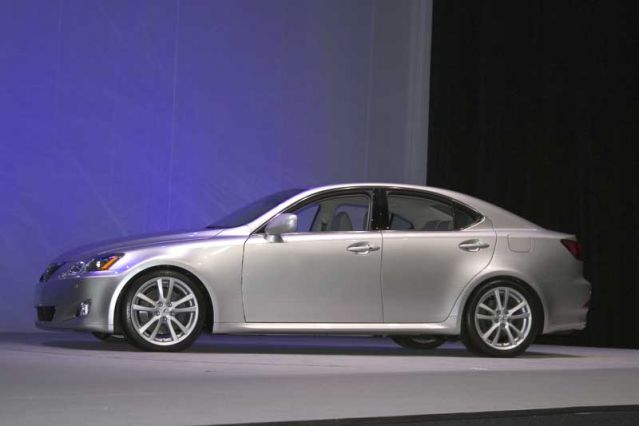 While a former president might have quibbled over the definition of IS, Lexus wants to be perfectly clear what it has in mind with the second generation of its sporty, entry-luxury sedan. The wheelbase is longer; the car is wider. The newer, sleeker design of the IS350 shown in New York is based on the automaker’s L-finesse design theme, putting an emphasis on sporty, yet minimalist design elements. There’s nothing minimal about the IS350’s numbers, however. The top-line model will be powered by a beefy 3.5-liter V-6 turning out 300 hp. It will boast a new front and rear suspension, and a sporty new version of the automaker’s Vehicle Dynamics Integrated Management, or VDIM, stability control system. The IS250 will feature a 200-horsepower, 2.5-liter V-6, and will be offered in both rear- and all-wheel-drive powertrain configurations. Though the most affordable entry into the Lexus lineup, the IS will be offered with a range of upmarket options, including adaptive (turning) headlamps, radar cruise control, and ventilated front seats.

Officially, at least, DaimlerChrysler still promises to launch its Smart minicar brand in the U.S. by the 2007 model year. But there were plenty of questions being asked in New York, and inside sources provided a few possible answers to TheCarConnection.com. The downsized Smart has run up some big losses in its short life, and DC is frantically looking for ways to cut the losses. It recently announced the delay — and likely cancellation — of the formore model, which was specifically being designed for the U.S. Even more radical steps are under consideration, and should be announced at a company board meeting next month. Among the most likely moves, TCC was told, would be a consolidation of most top-level functions, such as marketing, with Mercedes-Benz. There will likely also be some shifts in product design. The original smart City Coupe was renowned for its minuscule size and maximum mileage. More recent models have become a bit more conventional. But it is possible that a revised fortwo, Smart’s top-seller, would aim to play up its distinction from traditional products. Don’t be surprised, one source suggested, if it would feature such things as interchangeable body panels, which would permit an owner to switch from a sedan, say, to a coupe or mini-sport-ute, depending on mood or need.

Mustang …Don’t Slow Your Mustang Down 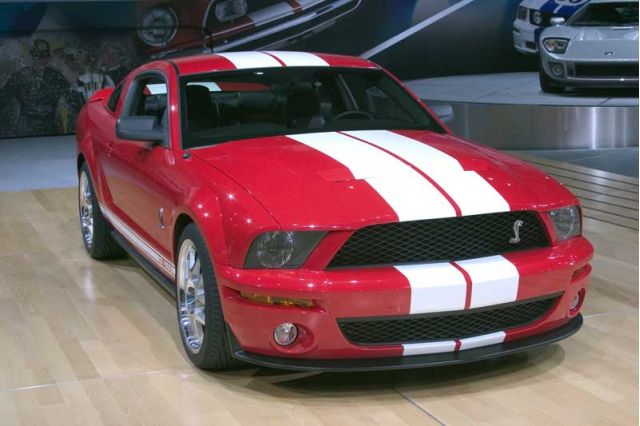 The long-awaited Shelby Cobra GT500 took its official bow in New York on Wednesday, putting to rest any rumors that Ford was getting ready to abandon its SVT high-performance unit. “I’m just proud to be here at this point in my life,” proclaimed Carroll Shelby, the legendary racer and raconteur who lent his name, and some of his knowledge to the development of the top-performing Mustang spin-off. Where the Mustang GT gets by with a 4.6-liter V-8 making 300 horsepower and 320 lb-ft of torque, the GT500 squeezes a 5.4-liter, supercharged eight-banger under the hood. Though Ford didn’t have official, final numbers, it should make at least 450-hp and 450 lb-ft of tire-spinning torque. Carroll Shelby first put his name on a Mustang way back in 1964, with the GT-350R racer. A production version followed soon after, and variations continued in production until 1970.

The SVT brand has gone through plenty of soul-searching in recent years, as Ford officials noisily argued over the role of performance in the brand. There were more than a few who considered killing off the operation, but in the end, SVT boosters won the debate. In the long-run, SVT’s new chief, Hau Tai-Tang, said the unit could have as many as five different models in production at any one time. And going forward, SVT will focus on trucks, as well as cars, a smart idea considering the nature of the current U.S. auto market. For its revival, SVT will start out with not only the Mustang, but also the Adrenalin, a pulse-pounding version of the newly updated Explorer Sport Trac. A crossover lend of SUV and pickup, the Adrenalin’s supercharged V-8 will make a whopping 390-hp and 390 lb-ft of torque. The all-wheel-drive truck will not only launch fast, but haul a heavy load, with a rated towing capacity of 6000 pounds. 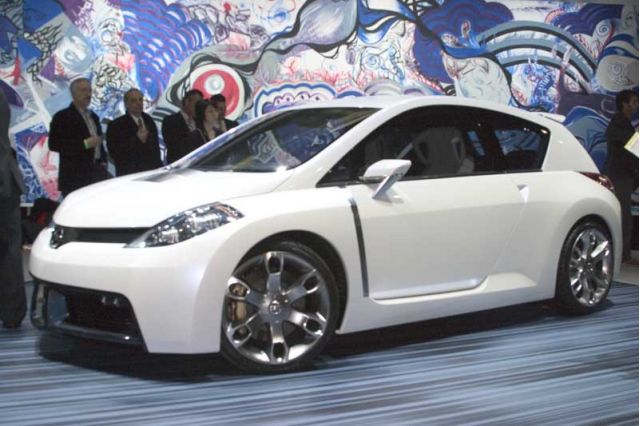 Is it simply a “design exercise,” in the words of one senior Nissan official, or are there production plans for the new Nissan Sport Concept, the edgy little show car that will officially make its public debut in New York next week? The three-door Sport Concept is arguably the most aggressive design exercise to emerge from Nissan’s design studios in recent months, the trio also including the Azeal sports coupe and the Actic, a crossover/SUV. Like the Azeal, the Sports Concept was developed by Nissan’s newly expanded design center in suburban Detroit. The prototype’s wedge design was heavily influenced by the U.S. tuner market, noted Nissan’s senior vice president of design, Shiro Nakamura. The high-tech cockpit boasts an assortment of digital touches, including its large video screen. The race-style seats emphasize the sporty nature of the design. Yet if it were to go into production, an admittedly less edgy version of the Sports Concept would be targeted “below the Sentra price range,” said Nakamura, and targeted at “first-time car buyers.” A decision on which, if any of the three concepts to build will be made in the near future, Nakamura hinted, adding that “otherwise, it will be too late.” He said he believes a vehicle like the Sports Concept might be seen as niche right now, but is likely to appeal to the mainstream as the so-called Millennium Generation grows older.