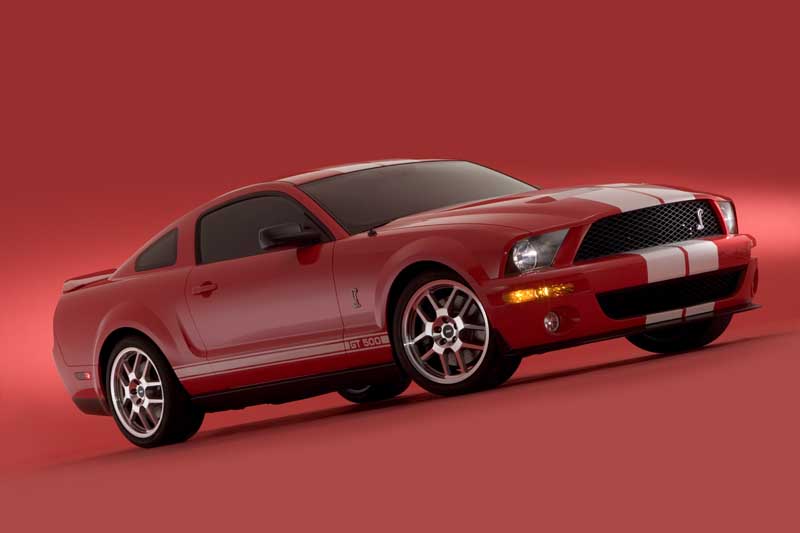 “I never thought I’d see my name on anything again.” Carroll Shelby has never been shy, but on this particular, late winter afternoon, he looks unexpectedly sentimental. Only moments before, he’d helped pull the covers off the newest incarnation of the Ford Mustang. And this one bore the legend’s name in big bold chrome letters just below the back spoiler.

The Shelby Cobra GT500 that will get its public debut in this week is a modern incarnation of the classic Shelby Mustangs that ruled the road four decades ago. But while there’s still plenty of brute force connected to the pony car’s rear wheels, the new GT500 is decidedly more sophisticated and, we’re promised, a good bit easier to drive every day.

Along with the new Sport Trac Adrenalin, the new Cobra also confirms the return of Ford’s brand-within-a-brand, SVT. Until recently, there’d been growing plenty of reason to wonder whether Ford would abandon the ultra-high-performance market, or turn to outside tuners, such as California-based Saleen, to produce its more powerful models.

As with the original Cobra GT350 and GT500 models, Ford’s newest pony car starts out with a modified stock Mustang. It gets a significantly stiffened suspension, 19-inch wheels, big Brembo brakes with cross-drilled rotors, Le Mans-style racing stripes and a variety of aerodynamic enhancements. Inside, buyers will find plenty of leather, ticket-me-red racing seats – to compliment the “SVT Red” exterior – and titanium-faced gauges, among other less-than-subtle touches. Immediately obvious is the fact that the base Mustang's fog lamps have been move from their inboard mount to the outer front fascia just below the bumpers. But for the signature snake, the engine can breathe unrestricted through the blacked out, crosshatch grille.

And, indeed, that signals that the big changes are to be found under the hood.

Where the Mustang GT gets by with a 4.6-liter V-8 making 300 horsepower and 320 lb-ft of torque, the GT500 squeezes a 5.4-liter, supercharged eight-banger under the hood, a pair of “Powered by SVT” camshaft covers making it clear what you’ve got to anyone who looks. The screw-type blower generates 8.5 psi boost. SVT’s revised strategy is to use existing componentry wherever possible, so the aluminum cylinder heads, piston rings and bearings are all derived from the base Ford GT. 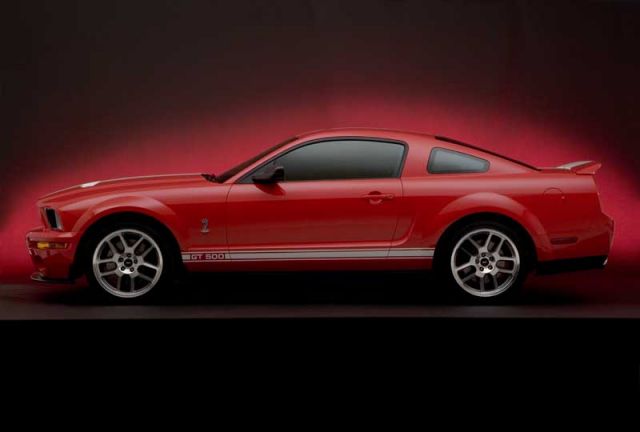 Even so, if initial ratings hold once the Cobra slithers onto the street in mid-2006, it will make at least 450 hp and 450 lb-ft of tire-spinning torque. That will make the ’07 Cobra the most powerful Mustang ever. The Cobra channels all that power through a heavy-duty, six-speed manual gearbox.

“The car answers all my dreams,” boasted.

Well, maybe not all of them. During a media preview prior to the New York Auto Show, Ford officials confirmed the new Cobra would stick with the base Mustang’s solid axle, rather than going for an independent rear. North American product development czar Phil Martens told TheCarConnection.com the decision was made for two key reasons. He insisted the results of the IRS system just weren’t better enough to justify adding 180 pounds to Mustang’s curb weight.

Actually, revealed, there was another reason. The results also weren’t good enough to justify a projected $5000 cost penalty. So we’ll have to wait and see whether they’re right, once Ford has a Cobra GT500 ready for the press fleet.

We’ll also have to wait for a formal pricing announcement, though SVT’s new marketing director, George Ayres, hints the Cobra GT500 will come in “around $40,000,” a bit above the old SVT Mustang’ $35,000 sticker.

One-time racer and long-time raconteur Carroll Shelby first put his name on a Mustang way back in 1964, with the GT-350R racer.

A street
version, commonly known as the “rent-a-racer,” followed, and was offered through Hertz, the leading rental car company. The “King of the Road” was the GT-500KR, which dominated the competition with its big-block 428-cubic-inch V-8. Less than 15,000 were built before going out of production in 1970. 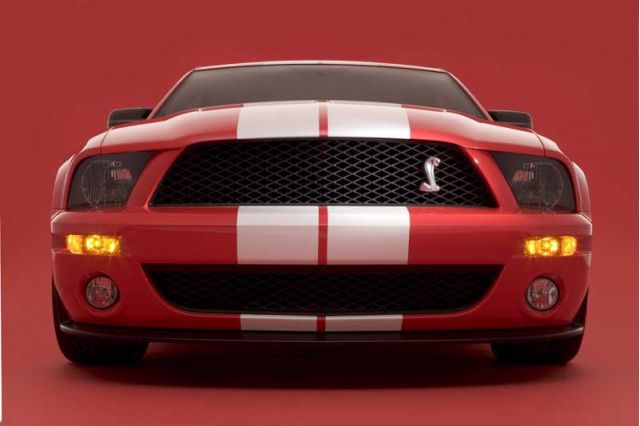 Over the years, has continued to put his name on a number of cars, including the less-than-hallowed front-drive econoboxes built by Chrysler Corp. in the 1980s. Several years ago, rejoined Ford, though there were plenty of questions what the pairing would produce. In particular, observers were left wondering by Ford’s seeming disinterest in the SVT badge. Some speculated that the Cobra would never hit market.

Now that it’s on the production schedule, along with the Adrenalin, Ford officials insist that the high-performance nameplate is here to stay. Hau Tai-Tang, the Vietnamese émigré who oversaw development of the new Mustang, and is now in charge of SVT, says the goal is to have as many as five different models wearing the SVT brand at any one time.

Exactly what might follow these first two models? No one is saying, though an SVT-upgraded version of the upcoming Ford Fusion sedan is reportedly in the works. Beyond that, “I want to lead,” hinted Tai-Tang. “I want to get into new segments and force the competition to follow.”

With all the power promised for the new Cobra GT500, it’s likely that almost everyone will have to follow.