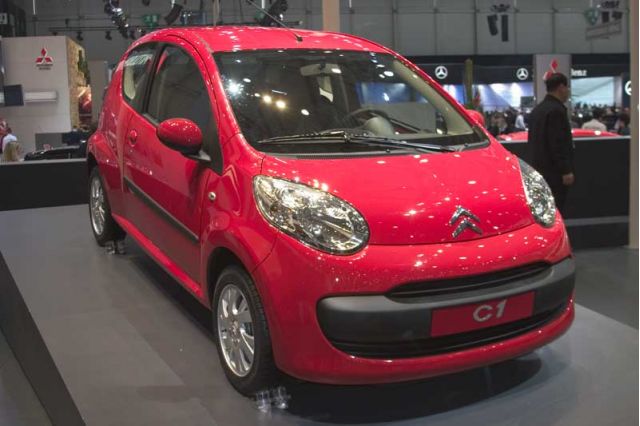 Citroën's PR people were proudly informing the press that they were offering something that few manufacturers, and possibly none, had done before — that is to introduce brand new cars at the top and the bottom of its range at the same motor show. The two were the C1, the Citroën version of the small citycar that is the long-awaited fruit of the joint venture between PSA Peugeot/Citroën and Toyota in the Czech Republic, and the equally long-awaited range-topper that takes the French firm back into the luxury segment, the C6.

While Toyota launched its version of the C1, the Aygo, with blasting sounds from an on-stand DJ and a posse of dancers that underlined the marketing message that this is a car for hip (hop) urban youth, Citroën was more restrained, leaving each car to make its own impact on the floor of the stand among the rest of what is now a wide range of cars covering a number of target markets.

The C1 is seen by Citroën as complementary to its C2, C3, and C3 Pluriel models, offering complete coverage of the supermini market that accounts 30 percent of European sales. By concentrating on the segment, the French company has reached a point where it has over nine percent of sales in the sector, a useful increase over the 4.1 percent it had in 2001. Worldwide, the company sold over 518,000 superminis in 2004.

The C1 should help to boost that figure further, by appealing to buyers — mostly young — who are looking for their first new car. It will be available in three and five-door versions, with a choice of gasoline or diesel engines. The gasoline unit is a 68 hp 1.0-liter four supplied by Toyota, while the diesel is a PSA Peugeot/Citroën product producing 54 hp from a 1.4-liter engine that, because of its diesel torque, Citroën is citing as an ideal engine for city use. Be that as it may, the main selling feature of the diesel will still probably be its low fuel consumption.

Styling of the car is recognizably Citroënesque , and only the really switched on will know that it comes from the same factory as the Aygo. The designers have given it a look that is all its own, and it is likely to fulfill its aim of appealing to young urban types. The dash is particularly cool — a word that has just recently entered the French language — with a large circular speedo that's easily visible through the steering-wheel and a rev counter mounted in a pod atop the dash. Think Mini/Smart influences and you'll get the picture.

External syle is curvy and cute — a big selling-point with the ever-increasing number of young female buyers in Europe — and the rounded contours of the front end are said to have been shaped with pedestrian safety in mind on the exterior and ease of repair and consequent low insurance rates on the inside. The car goes on sale later this year at a price that should appeal to its target market. 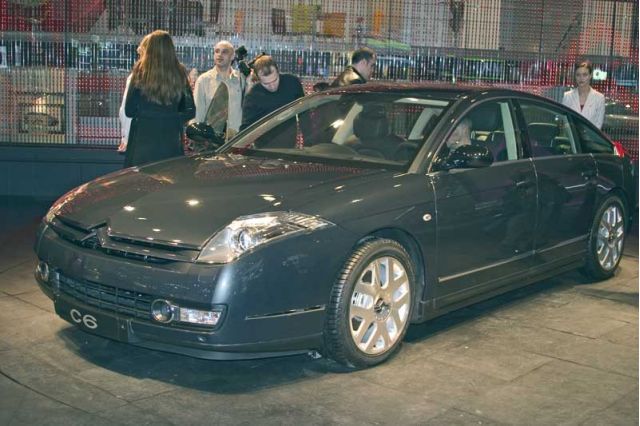 Look at the C6 luxury sedan and you will get the impression that the target market is presidents — and not just of Fance's top corporations. President Charles De Gaulle always looked at home in his Citroën, and one can imagine Jacques Chirac waving gracefully from the rear of this new luxury limousine. Long and low, the C6 has been designed to evoke links with the big Citroens of the past, and the stylists have done their job well. The overall shape of the car has elements — like the long front and short rear overhangs — that bring to mind the classic DS shape, which celebrates its fiftieth anniversary this year, and there are also hints of the more recent CX. The lasting impression is that this is not a car that is memorable in itself, but it certainly is a Citroën — and that's not a failing in the luxury market.

The brand's emphasis at the top of its range has always been ride comfort and smooth progress rather than sporting characteristics, and the C6 continues the trend. The running gear uses multi-link suspension at front and rear, while the suspension system features electronically controlled springing and damping. As a result, Citroën says, the C6 sets new standards in comfort, road-holding, and driving pleasure. To complete the comfort equation, the interior of the car has been designed to reflect modern interior design principles. On the show stand, the C6 was an interresting newcomer to the segment; to see how it behaves on the road, we will have to wait until late autumn, when journalists will get to try the car ahead of its appearance in Citroën showrooms. 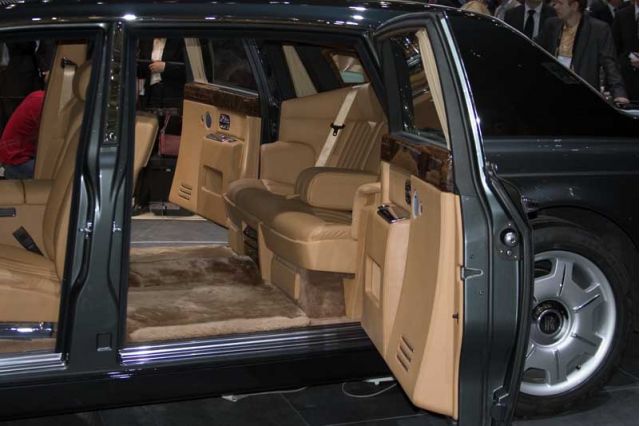 Geneva the town has always been a good market for Rolls-Royce, and it was fitting that the company chose to unveil the latest take on the massive Phantom here. The latest iteration is even more massive, with a healthy 250 mm  (9.84 inches) added to the wheelbase and the length of the rear doors. More than just a stretch job, the lengthening procedure involves the use of different elements in the aluminum spaceframe body, thus making the car a more coherent structure than a standard monocoque with a section welded in.

The pictures issued ahead of the show were encouraging, making the car look longer and more elegant, so the question was — would it look better in the metal? The answer was yes, so long as one stuck to the side view. The front of the Phantom remains as ugly as ever, with its mismatched lights and Grosser Parthenon grille stuck in a frontage that seems to have been designed to prove that with a big enough engine, no car needs to worry about aerodynamics and airflow. The rear compartment, however, is now even more spacious and will provide even more luxury for captains of industry and millionnaire rappers. And from inside the car you can't see the front end. 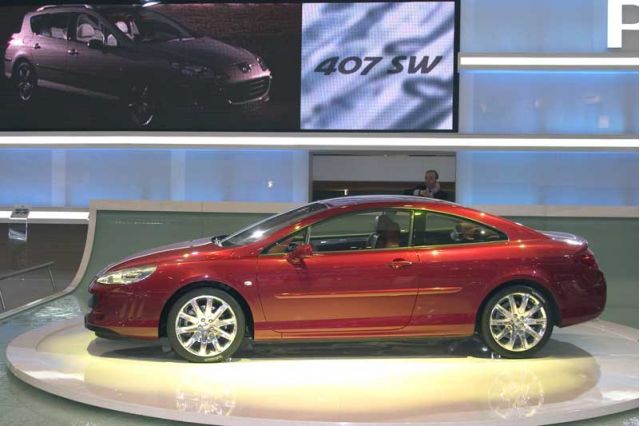 Peugeot used the show to gain reactions to the coupe it will add to its 407 range at Frankfurt. The stalking horse is called the Coupe 407 Prologue, and when the German show comes round in the fall we won't see much difference between the Prologue and the Production. Which is a shame, because this is one of those rare occasions when the new model doesn't look as good as the car it will replace.

The current 407 Coupe carries a Pininfarina badge, as many past Peugeots have, and it is one of the smartest cars in series production anywhere in the world today. It's no great performer, but it is very elegant, and the introduction of the new version will convert all the current 407 Coupes into instant collector's cars. The Prologue, which is the work of Peugeot's own design team, looks fine enough, but it's no Pininfarina.

The car has inherited the big low-slung grille of the sedan, and that's a mixed blessing. The egg-crate mouth looks fine in pictures, but somehow it doesn't translate too well to the real world of the road. The coupe designers have added 'gills' ahead of the front wheel arches that recall Bill Mitchell's Mako Shark Corvette dream car, but while Mitchell's gills were part of a complete design theme, the Peugeot's look like add-ons.

From the back, the car looks good, and the interior has a nice performance/personal car feel to it, but with current 407 coupes being offered at hefty discounts in some of Peugeot's markets, now could be the time to buy the old one.