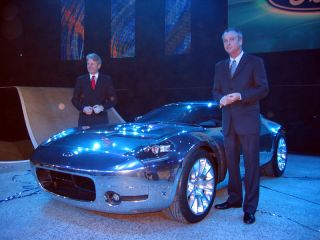 This year’s show produced many firsts — among them, the first press conference for auto show audiences by Dr. Eckhard Cordes, the new head of the Mercedes Group. Cordes, in a rambling press conference full of small stories and the big news of the new M-Class SUV, took a firm grasp of the chief concern surrounding Mercedes-Benz today: quality. Not only will Mercedes tackle the issue of perceived quality drop-offs, but Cordes took personal charge of the issue in

Cordes finished by reminding crowds that Mercedes had hit an all-time high for sales in the U.S. in 2004 of 221,610 units — about three times as many vehicles as the company sold here just a decade ago. More products are coming as Benz continues to diversify its lineup: in addition to the new M-Class, the R-Class crossover vehicle will be built in the same factory in 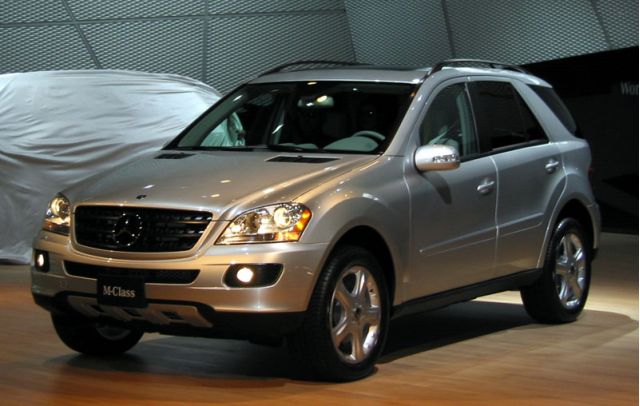 The new vehicle brought by Benz to the show was, as expected, the 2006 M-Class sport-ute. Born in but raised in 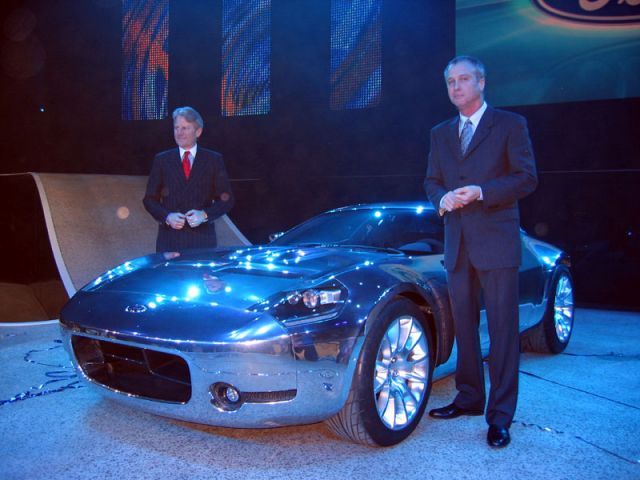 How much more convincing will Ford need to produce the awesome GR-1 concept? Not much, sources say — the intention is clearly to build the GR-1 as the successor to the Ford GT when that model finishes its production run in the next few years. For 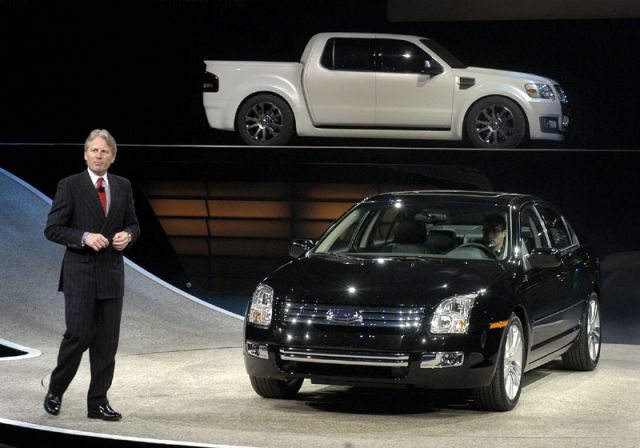 The mid-size future began today at the auto show — at least from Ford’s perspective, as they launched the first of a new trio of mid-size sedans that will bring the company back into play in the segment. The Fusion is a longer, wider version of the Mazda6, with a choice of four- and six-cylinder powertrains and in the future, an all-wheel-drive option. The base 2.3-liter four cranks out 160 hp, and mates to either a five-speed manual or five-speed automatic gearbox. The V-6 option is worth 210 hp, and it can be coupled to a six-speed automatic.

Though they’re related to the Mazda6, Ford calls its version of the architecture CD3 and has stretched it to meet the desires of more mid-size shoppers. Ford has stretched the floorpan 1.2 inches wider and 2.2 inches longer; longer door openings and an emphasis on rear-seat entry and exit have made for a marked improvement in backseat space, Ford says.

To be built at Ford’s

Five Hybrids in the Ford Family

Ford’s Fusion will be powered by a hybrid drivetrain in the next three years, the company confirmed at on Sunday. Ford, which came to the hybrid party after and Honda, says it will have no fewer than five gas-electric vehicles on the road within three years, not including commercial vehicles. But the company has those, too — Ford will launch hydrogen-fueled internal-combustion bus fleets at airports in and in the State of as it deploys all types of alternative-vehicle power including diesel, hybrids, hydrogen and fuel cells. As far as hybrids go, the North American Truck of the Year Escape Hybrid is joined this year by the Mercury Mariner hybrid, and a test fleet of Mazda Tribute hybrids is due within two years for global markets. After that, Ford plans hybrid Fusion and Mercury Milan sedans on the market within three years. That would give the company a total of five hybrids — with more likely to come as Ford spins up to ten vehicles off the Mazda6/Ford CD3 architecture, which Ford president Phil Martens says will also provide “fertile ground for performance vehicles down the road.”

Ah, the problems of naming concept cars. Ford’s new SYNus concept already had journalists sniffing at its assumed pronunciation, but according to design guru J Mays the name should convey a muscular stance, as in sinuous. The SYNus concept isn’t difficult to understand once you get beyond the name: think of an armored car with an interior by the Queer Eye guys. The SYNus is simply an urban assault vehicle on a smaller scale. Every detail is configured to keep out the blight of the world, from steel curtains for the windows to bank-vault-thick doors and a combination-safe dial on the tailgate. Inside that tailgate is covered entirely by a huge flat-screen display that makes the “warm, fluid interior” the place to be for movie nights parked on 8 Mile. Serious F-Series design cues, like the drop in the front-door beltline, convey the street-tough attitude that Mays is fascinated with of late. (And for music fans, the press-conference music was a White Stripes Seven-Nation Army knockoff that probably ticked off Jack White.) The SYNus’ powertrain is a 134-hp, 2.0-liter turbodiesel with 236 lb-ft of torque, proving that you can be kinder to the environment while essentially being sociopathic behind the wheel. The Fiesta-based concept is, by all accounts, exactly that, with no production intent.

SYNUS Concept Downsizes the SUV by Joseph Szczesny (1/8/2005)
A Euro-inspired ute could show the future of small Ford cars here.

The Truck in Black is Back

For the seventh time, Ford and Harley-Davidson have teamed to doll up an F-Series truck as a rolling homage to the burliest bikes on the road. The 2006 model year brings the new Ford Harley-Davidson F-150 SuperCab, dressed in black and striped red in the Harley idiom. While the previous edition of the Harley truck was based on the larger F-250, this year's edition starts with an F-150 SuperCab with a 6.5-foot pickup bed and adds Harley cues and pinstriping, along with 22-inch polished aluminum wheels, side tubes, and a new front bumper along with chrome trim. Inside, black leather is stamped with Harley-Davidson logos on the captain's chairs, and chrome trim touches the instruments, door handles, floor shifter and air vents. An all-wheel-drive version will be offered along with the stock 4x2 version, but all Harley F-150s will sport a 300-hp, 5.4-liter V-8 with a five-speed automatic.

Fairlane — The House, Not The Wagon 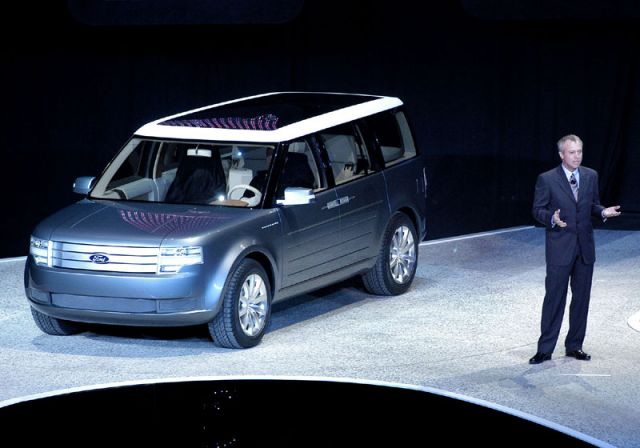 Mays’ design team has clearly been spending lots of time watching HGTV. It’s particularly evident in the new Fairlane concept — not named for its predecessor vehicle in Ford history, but for the Ford mansion in 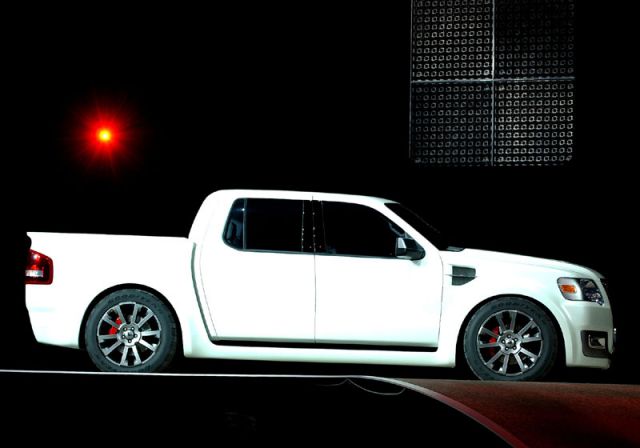 Honda has yet to show its Ridgeline sport-utility truck (it’s set for a debut this week), but Ford isn’t wasting any time protecting its turf. This Explorer Sport Trac concept takes the existing Explorer four-door chassis and converts it into the SUT idiom, with a five-passenger cabin ending in a short pickup bed lined in durable material. The concept puts the Sport Trac in a size class larger than today’s production vehicle: the new concept is almost five inches longer, two inches wider, and two inches lower than today's Sport Trac, giving it a "street" look, according to a press release. Powered by a version of Ford's 4.6-liter V-8, the Sport Trac concept also gets Roll Stability Control, which Ford says it will put on more than a half-million vehicles this year. The 21-inch wheels add to the bling factor of the concept, which loses door handles in favor of keyless-remote controls. An independent suspension is fitted in the rear, and Ford promises more cargo options in the Sport Trac's bed.
Tags:
auto Detroit Auto Show road Teens 2005 Auto Shows Mazda MAZDA6 News Mazda News
2022
The Car Connection
See the winners »
2022
The Car Connection
See The Winner and Nominees »