Get all our coverage here:

HUMMER may have the H2 initials locked up, but BMW's favorite H(2) these days is hydrogen — and that's the fuel it used to propel a new experimental race car to a new record. The H2R, shown off after its record-breaking run of 185 mph at a French test track, is thought to be the fastest hydrogen-powered car ever built, giving BMW's efforts to develop cars based around the alternative fuel a sporting shot in the arm. The H2R is powered by a 6.0-liter V-12, not the fuel-cell powertrain that other automakers have pursued as the industry tries to engineer a course away from fossil fuels. The H2R, BMW says, accelerates to 60 mph in about 6.0 seconds, weighs 3440 pounds, and develops 285 hp from its future-think powertrain. 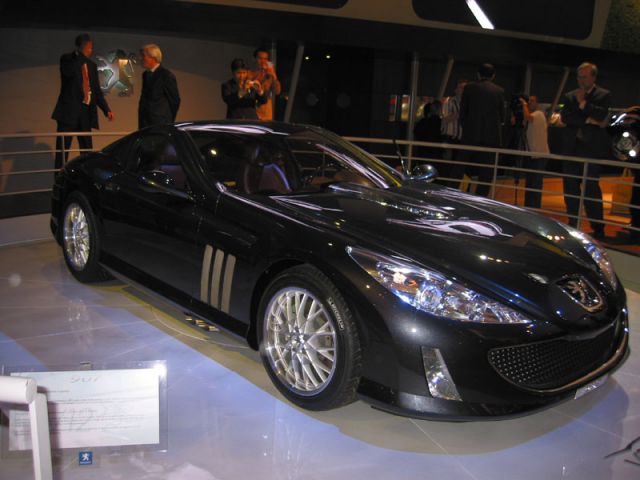 The stunning 907 concept has few antecedents, according to the loosely translated French dialogue we heard on the floor of the Paris Expo. In fact Peugeot says this concept is only the second vehicle to wear the number 9 — the racing 905 of the early 1990s being the other. The concept, according to execs, is the "concentrate of brand values," which apparently include a whomping 500-horsepower 6.0-liter V-12 coupled to a six-speed sequential gearbox. The big, handsome grand tourer is outfitted with a luxuriant interior, including Alcantara trim and a wooden steering wheel. 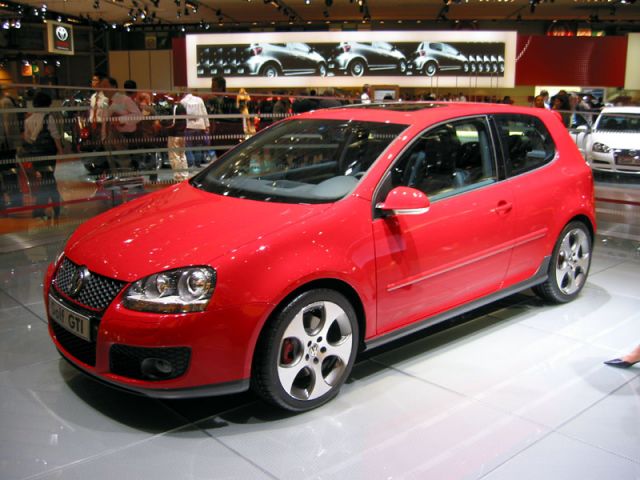 Though it's here at the Paris show this week and available right away for European customers, Volkswagen's GTI takes a looooong time to get to U.S. enthusiasts — the 2006 model doesn't arrive until October of 2005, and in the U.S. we'll only get the two-door model. The new GTI, the fifth generation of the go-fast econobox that practically invented its own market niche, shows up with the new 2.0-liter FSI turbo engine with 200 hp and 206 lb-ft of torque that's also found in the new Audi A3, here teamed too to a six-speed gearbox. So shod, the new GTI hits a top speed of 146 mph and should be able to sprint from 0-60 mph in 7 seconds; a DSG version should cut that figure to 6.7 seconds. The new GTI gets way more aggressive that previous editions: big bumpers front and aft, a black radiator grille with red rim, and black trim at the lower part of the body outline its intentions as do the rear wing, double exhaust tips, and 17-inch wheels. Inside there are logoed sport seats a three-spoke steering wheel, and aluminum pedals and shift knob. 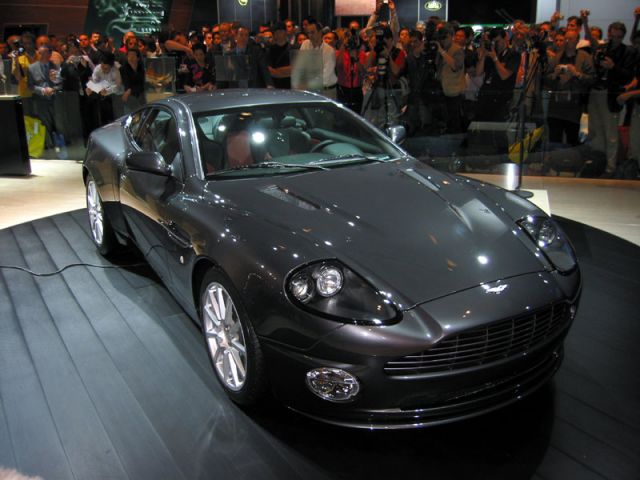 Fastest Aston — say that five times fast and the new Vanquish S will be gone before you get tongue-tied. Ford's uppermost brand said on Thursday at the show that a boost in power to its V-12 supercar pushes it to more than 200 mph. The 6.0-liter V-12 in the Vanquish S now develops 520 horsepower, and gets small revisions to its suspension and steering to handle the newfound capabilities. Aston will still build the "slower" 460-hp version, but the S will assume the topmost spot in the lineup — and will wear some cosmetics befitting its new station in life, including a more rounded grille and a new trunklid revamped for better high-speed air flow. Larger six-piston calipers for the brakes are included. And as always, the price is "if you have to ask…" 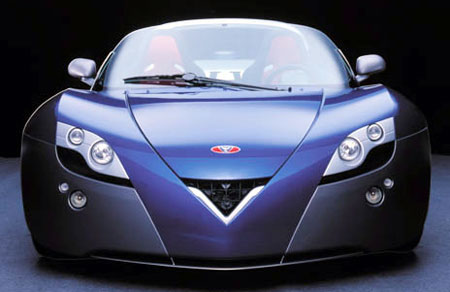 The small French car manufacturer Venturi presented its first sports car 20 years ago. It was a 161-inch-long coupe that was produced until 1996 and was offered with a 2.5- or a 2.8-liter engine. At the same time Venturi also built a convertible variant. In 1992 Venturi unveiled its more spectacular 400 GT, followed in 1995 by the Atlantique 300. Now, Venturi has shown a completely different car, the Fétish. The new model is powered by an electric engine with 245 hp and a maximum torque of 162 lb-ft. With a weight of only 1773 lb, of which 772 lb are taken by the batteries, the Fétish can accelerate from 0-60 mph in 4.3 seconds, while it reaches a top speed of 106 mph. The range is 217 miles. Venturi used mainly carbon fiber and aluminum for the 153-inch-long Fétish, which will be built to order beginning in November and which will be shown in the at the L.A. Auto Show that opens to the public on January 8, 2005. Buyers will have to pay $480,000 or the equivalent in Europe; a price hasn't been set. 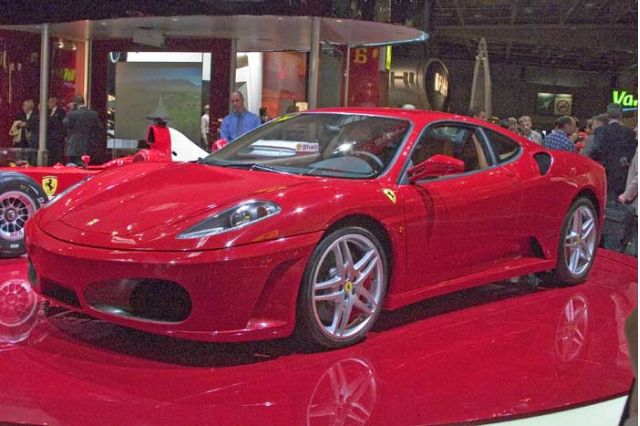 With a body styled by the legendary Italian design house, Pininfarina, the new F430 is the latest addition to the Ferrari line-up. The $160,000 two-seater will replace the aging 360 when it reaches showrooms later next year. The heart of the new coupe is an aluminum 4.3-liter V-8 making 490 horsepower through a Formula One-style gearbox, an electronically-shifted manual with paddle shifters behind the steering wheel. The system can shift gears in just 150 milliseconds. There's enough power to launch the F430 from 0-60 in 4.0 seconds and the car tops out at just under 200 mph. The F430 makes good use of Ferrari's racing knowledge, with its electronically-controlled differential and carbon-ceramic brakes. There's also a system, called marinetto, which allows the driver to adjust suspension settings without taking hands off the steering wheel.
Chevy Going Global with New

There was a time, not all that long ago, that General Motors so dominated the American market, the U.S. Justice Department tried to split the automaker in half. If all had gone according to government plan, Chevrolet would have become a company in and of itself, and then there'd be the rest of GM. It's been a long time since the feds abandoned their anti-trust assault. Market forces have done the job for them. Yet despite a sizable decline over the last few decades, Chevrolet is still a force to be reckoned with. It's close to selling three million cars a year in the , and hopes to nudge past Ford Division to again become 's best-selling brand. Chevy also dominates in Latin America, the and worldwide, the nameplate accounts for nearly one of every sixteen cars and light trucks sold annually. "Chevrolet is the foundation brand for General Motors' global spectrum," said GM CEO Rick Wagoner, during a recent seminar on the automaker's global strategies. The exception has been , where the Chevrolet bowtie is all but invisible. Sure, European buyers nab a few Corvettes each year, but GM's mainstream brands are Vauxhall, in the , and Opel, in the rest of . At least, that's been the order until now. But it's about to change. "Opel (and it's virtual twin, Vauxhall) has too broad a range to cover," explained GM executive Gary Cowger. The European brands have been trying to offer products in virtually ever possible niche and market segment, from mini-compact econocars, to mid-luxury sedans, even the go-kart-like Opel Speedster.

Carlos Ghosn will take his no-nonsense management style back to Renault in May of 2005 — but in the meantime, he continues to set down lofty goals for Nissan, the Japanese automaker that he has led successfully for more than five years. Nissan is again on track to meet the sales and financial goals set for the current fiscal year, which ends March 3. "I would say we are on track both on the global sales volume for the year and we are on track for the financial performance for the year," Ghosn said during a round table with reporters at the Mondial de l' Automobile in last week. Ghosn added the first half of the year was "slightly softer" because Nissan had not launched any new products over the past six months. Nissan's fortunes will shift for the better, however, with the introduction of several new products, including the Pathfinder sport-utility vehicle and the Frontier pickup truck in the and the introduction of more new vehicles in and in where the Japanese automaker hopes to make a better showing in the future.

Ghosn Taking Cost-Cutting to Paris (9/25/2004)
As he prepares to lead both Renault and Nissan, Carlos Ghosn sets some ambitious goals.

's plan to cut what it deems global-warming emissions will produce the toughest car emissions standards in the world. According to the Associated Press, will become the first state to set maximum levels of emissions like carbon dioxide and nitrogen dioxide beginning in 2009. Because those emissions are generated by gasoline-powered engines, the effect of the new rules will be to require dramatically higher fuel economy and cleaner-burning fuels. Overall, the new rules would require automakers selling vehicles in the state to reduce emissions by about 30 percent by 2016, seven years after the new rules take effect. California's rules for emissions are also followed by seven Northeastern states, and analysts say if the state can make the rules withstand legal challenges from automakers and from the federal government — which insists it's the only body to be able to set fuel-economy levels — it will likely force nationwide increases in fuel economy. California Gov. Arnold Schwarzenegger is said to be in favor of the new measures, but automakers are already estimating the new rules would add at least $3000 to the price of a new vehicle.

Governor Bob Riley joined community leaders from and executives from (NYSE: TM) today to announce another expansion of 's engine plant located in . "This is the second major expansion of the Toyota plant in the past fourteen months and is yet another sign that 's economy is on the right track," Governor Riley said. "The fact that Toyota has essentially doubled its presence in Alabama shows not only that this is a truly successful company with a great team of workers, but that it also has a lot of confidence in the economy of our state." This expansion project will nearly double the size of the current facility. Additional investment for this expansion will be $250 million, bringing the total to $490 million. Another 300 jobs will be added for a total of 800. Annual production capacity will be increased by 150,000 engines for a total of 400,000 units.