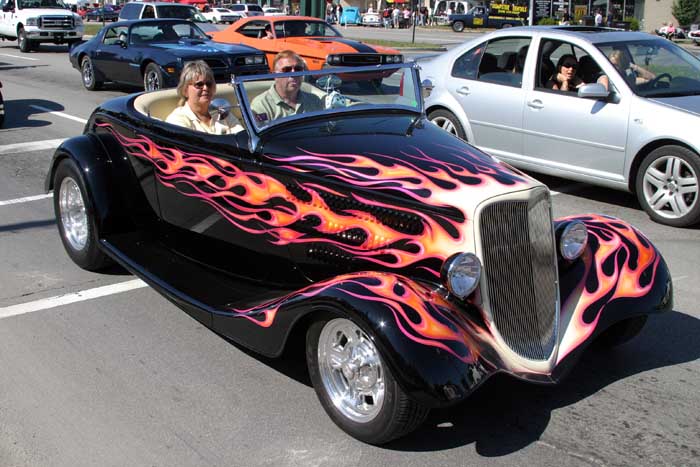 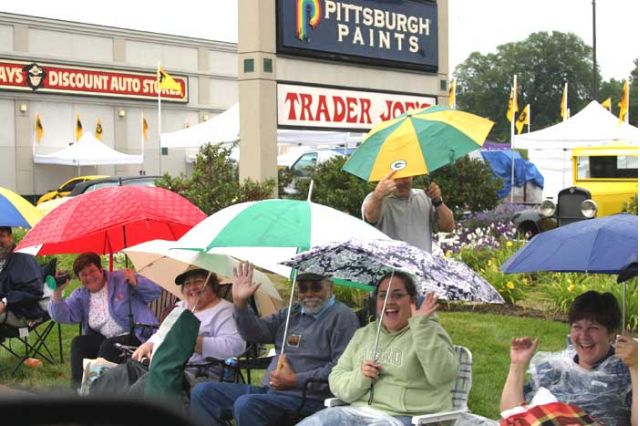 Mother Nature hasn’t been very kind to this Summer. It’s been raining almost every weekend, which isn’t the sort of weather you look forward to if you own a classic cruiser. Yet the soggy season hasn’t done much to dampen enthusiasm for this year’s Woodward Dream Cruise. Indeed, what began as a Saturday rally has evolved into a nearly month-long ritual. 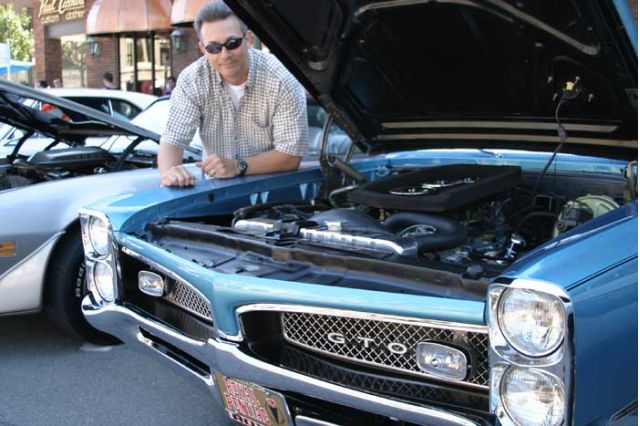 “By the end of July, you see people sitting on the side of the road in their lawn chairs,” says John Banach, who’s logged 2000 miles cruising Woodward this Summer in his carefully-restored '67 GTO. Last year's big blackout nearly scuttled the Dream Cruise, until the governor ordered gasoline shipped in from the other side of the state, where they still had electricity to operate the pumps. So this year, it was clear that even a heavy downpour wouldn’t keep folks away Friday night. But in a sign that someone “upstairs” is a muscle car fan, the skies cleared just in time for the official Saturday Dream Cruise. 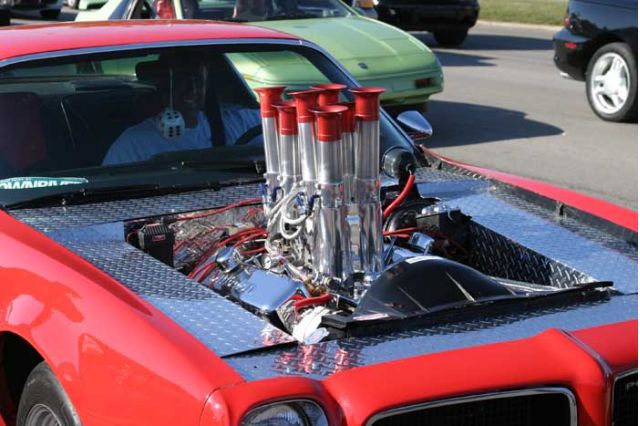 They don’t call them muscle cars for nothing. By various counts, this year’s Woodward Dream Cruise drew as many as 60,000 classic cruisers. It was a perfect day for spotting well-preserved GTOs, Challengers, and Mustangs. And all you had to do was ask for a look to see what was making all that noise. 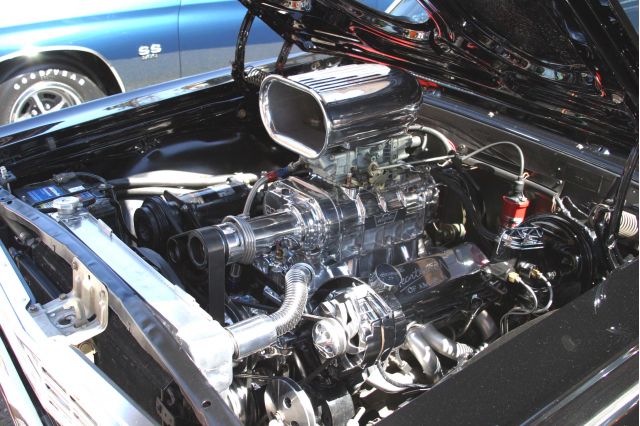 There were plenty of stock 383s, 409s, and 427s, and countless custom jobs, as well. With some cars, you didn’t even have to look under the hood. 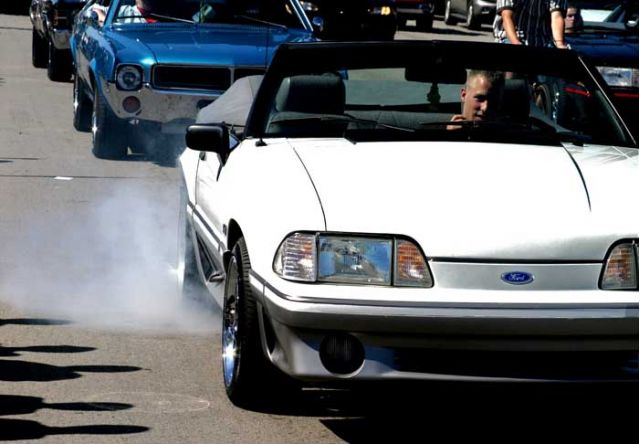 To true muscle car aficionados, there's nothing like the sound of a big, American V-8 — unless you're talking about the sounds of burning rubber. Unfortunately, “lighting ‘em up” was a very definite no-no, enforced by a heavy police presence. The “fuzz” were pretty tolerant, overall, but squealing the tires was a definite invitation for a ticket. Of course, when it came to this restored police car, everyone was more than happy to sing the blues. Hit it, Elwood. 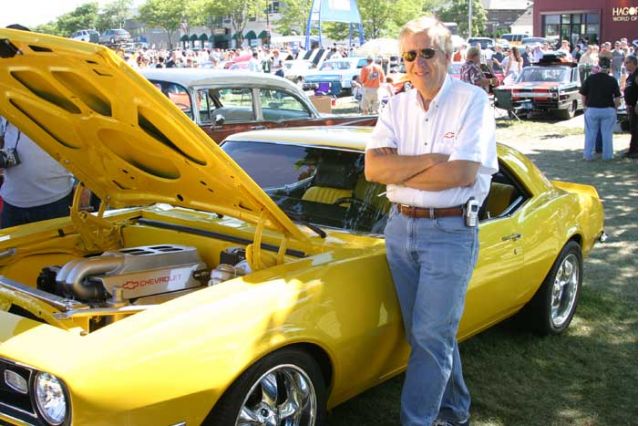 Old cruisers don’t die. They just keep coming back to every Summer. And in the case of Darwin Clark, a recently-retired General Motors executive, this year’s Dream Cruise offered up an opportunity to test out the latest entry in his growing stable of muscle cars. He’s spent three years fixing up this '68 Camaro with the one-of-a-kind custom paint job. “I love the Dream Cruise,” he beams, pointing out that “When I was over in (working for GM), I’d come back every year.” is just finishing up a '54 Corvette he’ll bring out to Woodward next Summer. He’d actually been building it for a 15-year-old grandson, but then the youngster lost interest. “Sometime between starting and finishing, he found a girlfriend, so I said, ‘it’s my car.’” 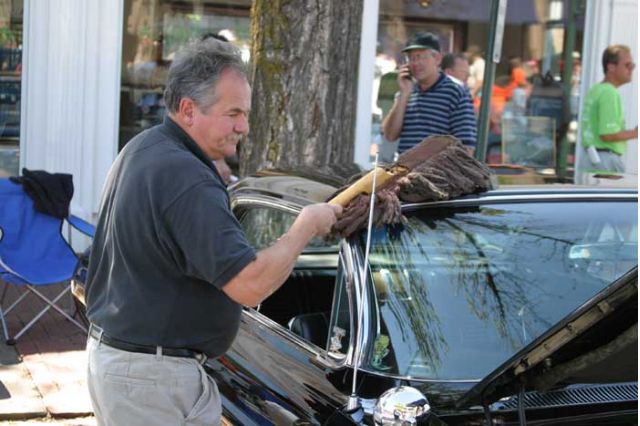 As for Jim Kennedy, of , he doesn’t need the Dream Cruise to run the length of . “I grew up out here and I just think it’s in my blood.” So’s his '62 Pontiac Grand Prix, which you can see is in absolutely immaculate condition. 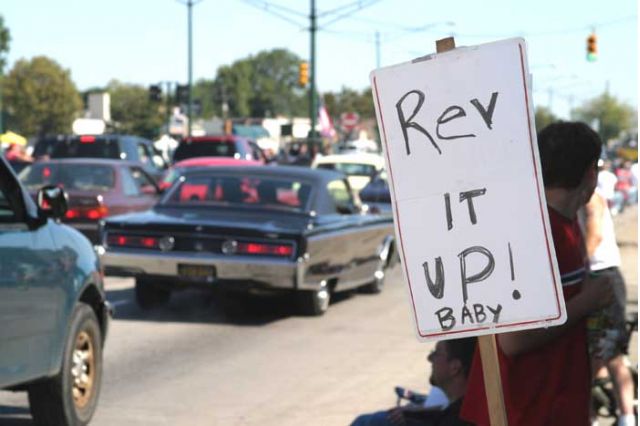 Signs of the times
Everybody, goes the old line, wants to get into the act, including these vocal fans who wanted nothing more than to hear a few tires spin. 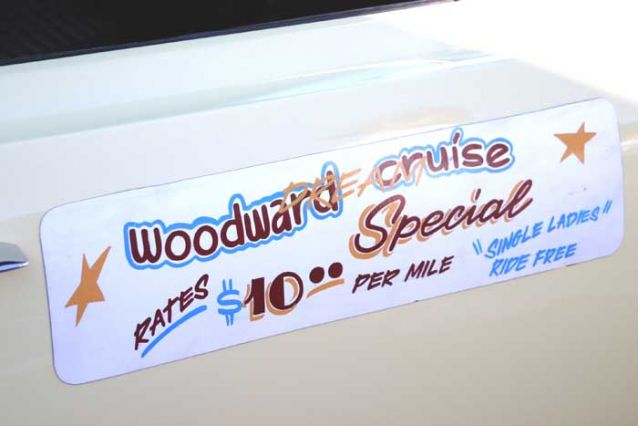 An enterprising taxi driver made it clear that money is not his only object. 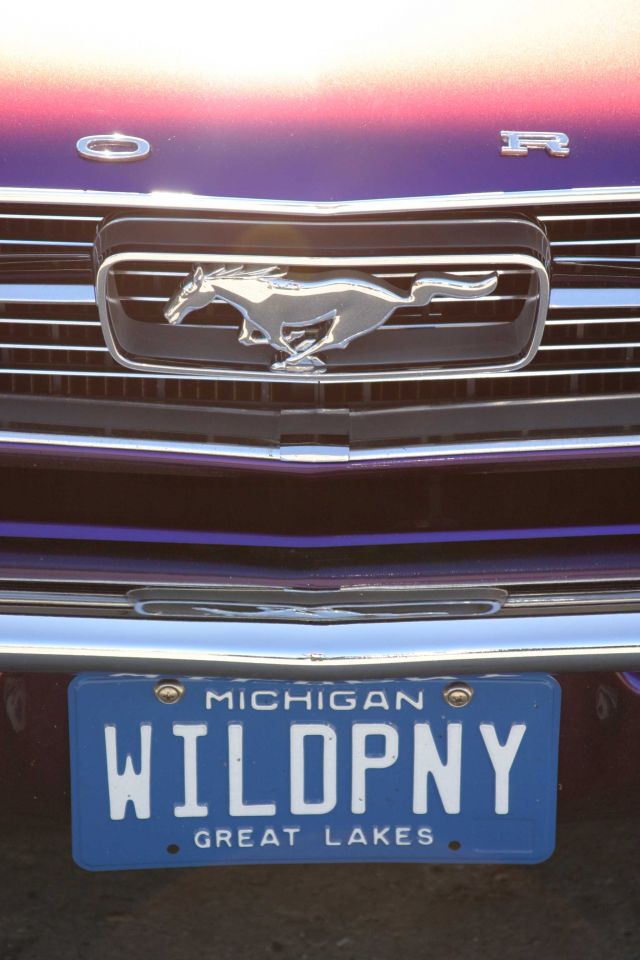