Corvette Convertible Gets Powered Up 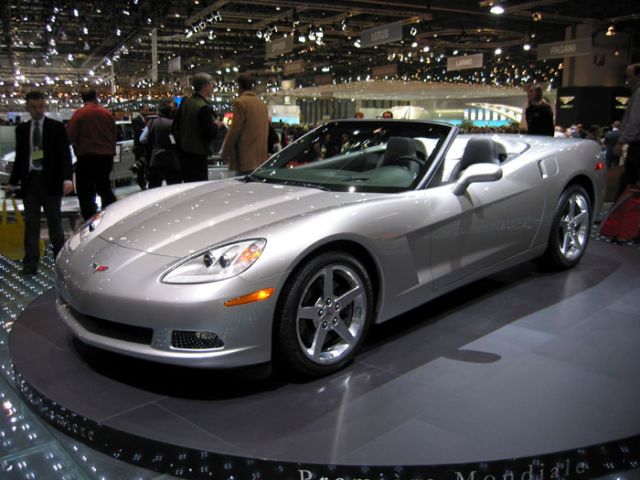 Chevrolet showed off its Corvette Convertible, which returns in the new body style with a power folding top. The structure around the windshield and the door pillar have been redesigned for  improved rigidity in such a way that the ragtop C6 would meet the federal crash test standard for cars with a fixed roof. Some 15 pounds of acoustic damping material has been applied in the cockpit to reduce noise, but at the same time the engine lost some weight, so in the end the Convertible is not heavier than the coupe. The soft top disappears completely under the tonneau cover behind the seats. Underneath the cover are two small luggage compartments. The power top will be an option: with a push on a button the top can be lowered or raised in 18 seconds. The new 400-hp lightweight LS2 V-8 of the coupe, in combination with the six-speed stick shift, also serves as the roadster's powerplant, whereas the four-speed automatic transmission is available as an option. The open Vette should be able to do 0-60 mph in 4.1 seconds and should reach a top of  180 mph. It can be expected to go on sale in the fall for a price between $51,000 and $52,000. 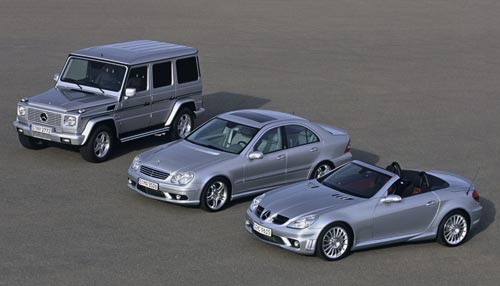 Also new at the Mercedes stand in Geneva is the G55 AMG, the fast version of the famous Geländewagen off-road vehicle that was introduced 25 years ago. The G-Class now gets the V-8 kompressor (supercharged) engine with 476 hp and 568 lb-ft of torque, which is respectively 34 percent and 32 percent higher than of its predecessor. The G55 AMG accelerates in 5.4 seconds to 60 mph and reaches a top speed of 130 mph.

Toyota Has Electric Supercar in Volta

Italdesign, Giugiaro’s Italian styling studio, combined with Toyota for the Volta, named in honour of physicist Alessandro Volta, the inventor of the battery. So it is no wonder that this design study is equipped with the hybrid power plant of the RX400h, that was unveiled in Detroit. The system is the second generation of the Hybrid Synergy Drive, which uses the 3.3-liter V-6 of the RX330 and a very strong electric motor. The combination offers 408 hp and propels the Volta from 0-60 mph in about four seconds. One gas tank of 13.7 gallons should be enough for 435 miles of driving to be enjoyed by three passengers that sit besides each other. 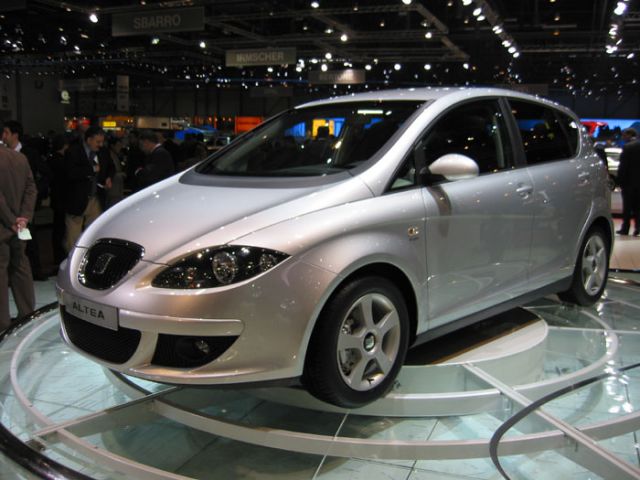 Spain's Seat, a part of the VW group, showed the Altea concept for what it calls a "Multi-Sports Vehicle" at the Frankfurt show last September. The Geneva version is in fact the production version that will go on sale later in the year. SEAT points out that the Altea is the first vehicle to be completely developed within the Audi Brand Group since it was established in 2002. Power will come from 1.6- and 2.0-liter petrol engines and 1.9- and 2.0-liter diesels. Top-of-the-range models will have six-speed automatic or DSG gearboxes. Seat is tasked to bring some Mediterranean flair to VW's Audi Group; the Altea is Design Director Walter de'Silva's first step along the way

GM Europe showed a city-car concept, the Maxx, at Geneva some years ago. This year there's another double-x, the Trixx, which approaches the same needs. It's designed, like the Renault Wind, for three adults, but the Trixx adds space for a single child as well. Utilizing GM Europe's industry-leading expertise in making MPV seats that disappear, the Trixx can also be used by the driver alone as a load-carrier. The unusual thing about the disappearing seat format of the Trixx is that the rear seat doesn't fold, it inflates, thanks to an onboard air compressor. There are three electrically operated sliding doors, one on the driver's side and two for passengers, and long-legged passengers can fold the front passenger seat and stretch out in the back. 119 inches long, 65 inches wide and 61 inches high, the Trixx is powered by a 1.3-liter diesel engine. 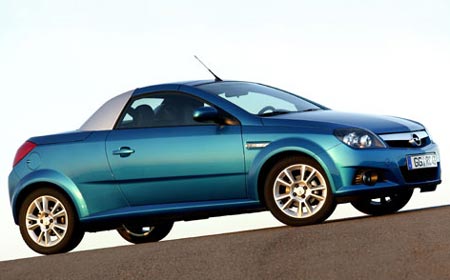 Although nobody has driven it yet, the Opel Tigra TwinTop has earned its first prize already. In Geneva the car was elected Convertible of the Year 2004. The outcome of the yearly election at the end of the press days of the Geneva Auto Show was not a surprise, as there were not many new convertibles at the show. In this case, GM’s smallest beat GM’s largest, the Corvette Convertible. The jury of 20 automotive journalists chose the Tigra TwinTop because of the nice design and the clever roof construction. The electrohydraulic steel roof disappears with a push on a button vertically behind the seats, leaving 8.8 cubic feet of storage capacity. On top of that there is more storage space behind the seats (five cubic feet). The TwinTop is the second Opel to win the title. In 2000, the Speedster was the first. 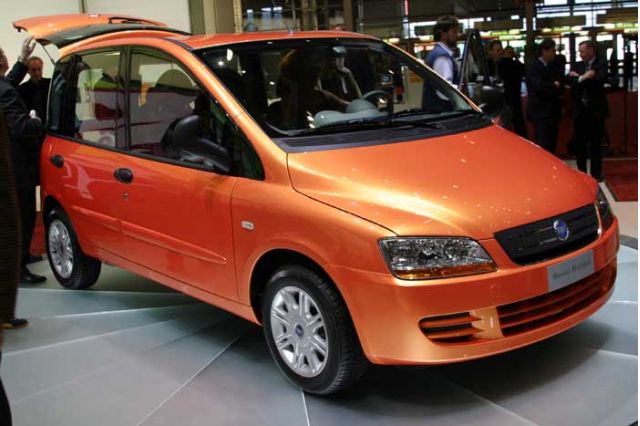 Fiat unveiled the successor of the Multipla, a controversial looking minivan with three seats up front and in the rear, in Geneva. Fiat obviously had too many negative comments on the exterior of the daring Multipla, so the body of the new version is less extreme. With the Idea 5Terre concept car, the Italians show a bold version of the brand new Idea, that hints to a real ‘off-road’ vehicle with thick bumpers, but without roof rails. For more all round driving capabilities the 5Terre is equipped with 4WD. Earlier, Fiat did the same with its new mini, the Panda, and showed a rugged version with roof rails. That one will go into production in September. Fiat did not want to confirm if and when the 4x4 version of the larger Idea will see production. 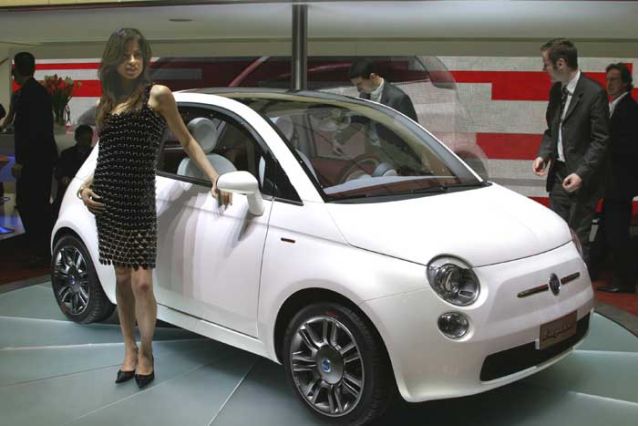 Undoubtedly one of the best concept cars of the Geneva show is the Fiat Trepiùno (tre-pyu-no). Fiat lost important ground in the segment of the microcars to Smart, which seems to have taken over the traffic scene in Rome and other crowded Italian cities. So, however late, Fiat had to do something and now comes with a real mini, which is a retro model as well.  European car lovers will remember the historic Fiat 500 and the Trepiùno concept could well be the reincarnation of the famous little Fiat. Word is out that the Trepiùno might go into production in the fall. The name means three-plus-one and indicates that the 130 inch short Fiat seats three adults and a kid. The microcar is built on the platform of the Panda and will probably be equipped with the engines used in the Panda. 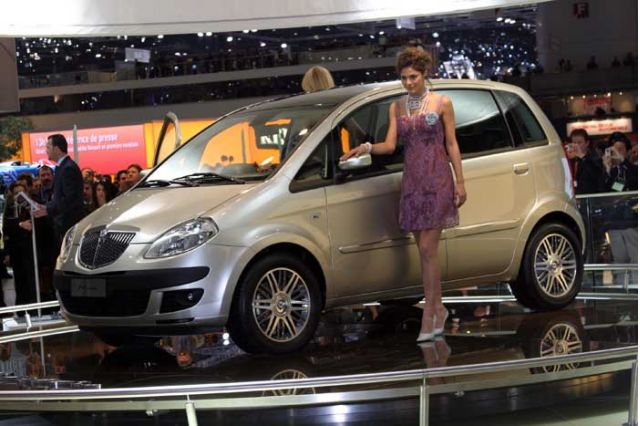 Another small car of the Fiat group that bowed in Geneva is the Lancia Musa. It is the twin brother of the Fiat Idea and Fiat qualifies the car as a compact MPV. That term is in fashion now in Europe, where small cars are popular and manufacturers want to use names for versions that hint to larger models. The Lancia Musa is a luxury version of the Idea with climate control, a Bose sound system and a DFN half-automatic transmission. DFN stands for Dolce Far Niente, or “nice and lazy, doing nothing.” The new Lancia will hit the European markets by the end of this year with a choice of gas and diesel engines.
Tags:
Audi auto Body Driving Engine Geneva Motor Show 2004 Auto Shows
2020
The Car Connection
See the winners »
2020
The Car Connection
See The Winner and Nominees »