Concept 100EX Is Ready to Rolls 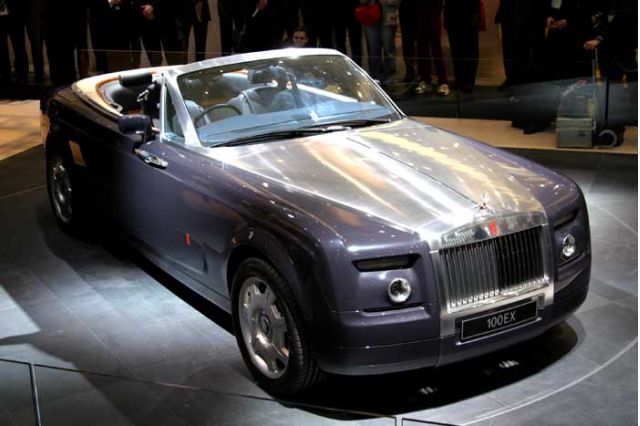 To mark the centennial of the company, Rolls-Royce lifted the covers off the 100EX, the latest in a long-running series of experimental automobiles that date back nearly to the day when Charles Rolls and Henry Royce decided to join forces. Though the EX bears a strong resemblance to the new Rolls-Royce Phantom – including its aluminum spaceframe construction – it adds a few notable touches, the most obvious being a convertible top. There’s also an unusual fold-out trunk. The 100EX is nearly seven inches shorter than Phantom, and about three inches lower. Is it a hint of what’s to come? The prototype certainly looks like it could be the anticipated replacement for the old Corniche convertible. But while “everyone will be expecting this to be a new series model, it is not,” insisted Tony Gott, the CEO for the British brand, which is now the flagship for BMW AG. At least not now, anyway, but another senior official tells TheCarConnection there are very definite design elements and technological features Rolls would like to incorporate into a future convertible. The challenge is to make a convincing business case, and for the moment, the high-line marque needs to focus on nudging up demand for its Phantom sedan. If and when that’s on track, the issue of a second model is likely to get a more eager reception from the BMW board of directors. 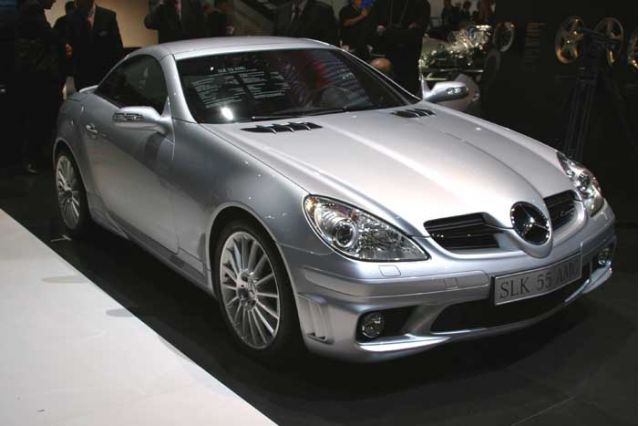 The first thing you notice is the family resemblance. The newly updated Mercedes-Benz SLK has taken on many of the same design cues originally seen on the automaker’s higher-priced SL roadster and SLR supercar models. The basic dimensions of the second-generation roadster resemble those of the outgoing model, which was first introduced in 1996. There are a number of interesting innovations debuting with the ’05 SLK, however. These include the unusual Airscarf system, which directs warm air through the driver and passenger headrests to make it easier to enjoy top-down driving all year. The SLK gets an optional, “light-bending” bi-xenon headlight system which follows curves in the road. And drivers can opt for a variety of powertrains, from a supercharged, 163-hp four-cylinder package to the 360-hp V-8 being offered in the SLK 55 AMG. The most powerful version of the roadster ever offered, it will launch from 0-100 km/h (0-62.5 mph) in barely 4.9 seconds. Motorists can mate the big engine to Mercedes’ unique new seven-speed automatic transmission, or opt for a six-speed manual.

Will A Coupe-Like Sedan Blur the Benz Lines? 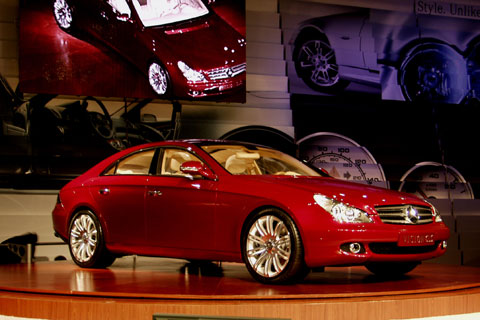 Mercedes also took the wraps off the production version of its Vision CLS concept, a vehicle that could further blur the lines between traditional product boundaries. The 2005 CLS features a swept, sporty, coupe-like roof, but also boasts four doors. Though you may have to duck a bit to get in, that’s still a lot easier than with a conventional coupe, especially for the type of older buyers that can afford a Mercedes in this price range, suggested the automaker’s boss, Juergen Hubbert. The CLS will feature a range of six- and eight-cylinder engines and come with an array of safety features, such as head curtain airbags and the German maker’s unique Pre-Safe system, designed to anticipate and prepare for a likely crash. While Hubbert stressed that Mercedes won’t abandon the traditional two-door body style, he hinted other four-door coupes could follow in the coming years. There’s already “a big demand” for the CLS, he boasted, adding “We’re not sure we have enough capacity.” Eventually, annual sales could top 30,000, he forecast.

Smart Hooks Up with Brabus 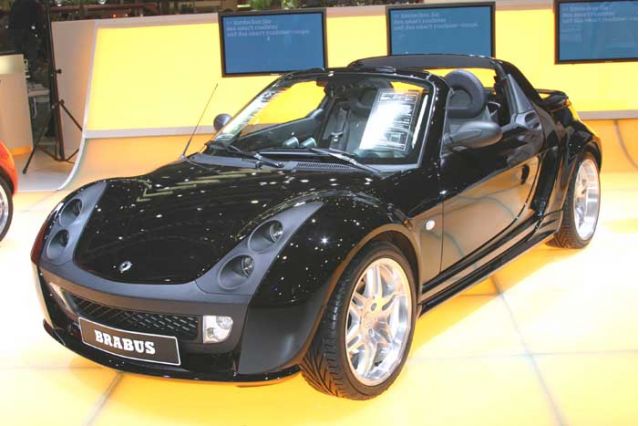 Barely a year after launching its new roadster, DaimlerChrysler’s Smart brand was back in Geneva with the performance-tuned Brabus roadster and Brabus roadster-coupe. With 101 horsepower – 20 percent more than the original models – the Brabus edition delivers a top speed of about 120 mph, no mean feat in cars so small. Both models get sports suspension packages, 17-inch alloy wheels, and heated black leather sports seats. Prices start at around 25,000 Euros, and we’ll leave it to the mathematicians to figure out what that works out to in the freefalling U.S. dollar. 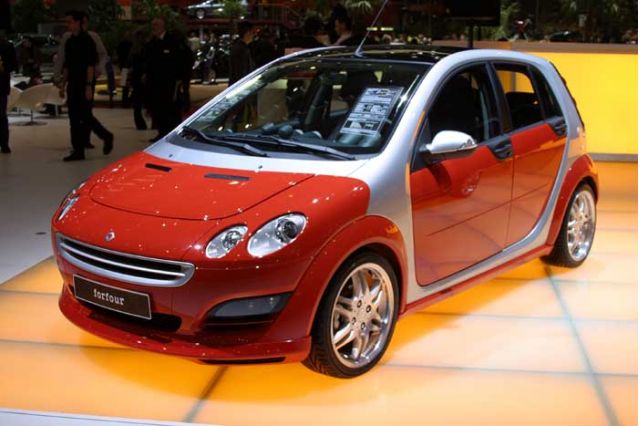 Smart also rolled out the production version of its latest model, the five-door forfour. Despite offering seating for four, the new model still measures barely 12 feet, bumper-to-bumper, and weighs in at just 2200 pounds. The forfour will offer buyers a wide range of gasoline and diesel engine options, from 68 to 109 hp. The platform for the forfour will serve as the foundation of another, SUV-like model, the first that will be imported into the U.S. when Smart debuts there in 2006. 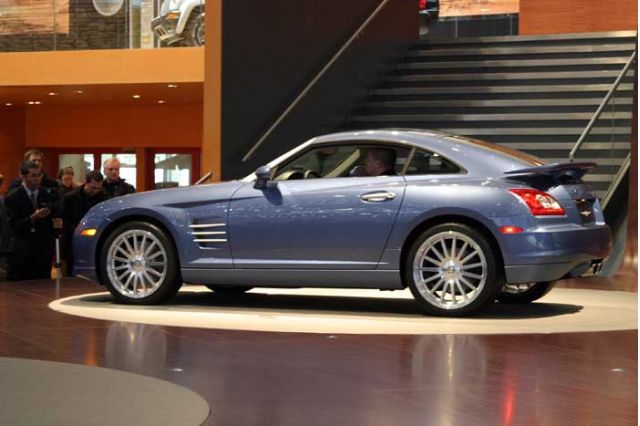 Determined to finally make real inroads into the European market, Chrysler has figured out what it hopes will be the formula for success: not just more models, but more powerful ones, as well. Originally, the automaker had intended to unveil nine new vehicles in Europe this year, but CEO Dieter Zetsche said that will now grow to 10. Among the models making their first appearance in Frankfurt were the Crossfire SRT-6 and Crossfire Cabrio SRT-6. These are the first Chrysler-brand products badged SRT, a designation previously reserved for Dodge. Using the help of Mercedes’ AMG “tuner” division, the two Crossfire models will boast hand-built, supercharged 3.2-liter V-6 engines putting out 330 hp. To complete the package, both the coupe and cabrio SRT-6 models will feature rear spoilers, performance-tuned suspensions, 15-spoke alloy wheels – with 18-inch front and 19-inch rear tires – along with significantly beefed-up brakes. The Crossfire models were joined on the Geneva show stand by a Hemi-powered 300C sedan. It’s all part of a performance push that’s critical for Chrysler’s long-term success, Zetsche told TheCarConnection. “We think we have a chance to be in a unique spot as the only brand in Europe offering uniquely American products, so SRT is an important part of that positioning.”

Zetsche Wants to Join the ME Generation

Don’t go looking for the ME-412 supercar at your local Chrysler showroom anytime soon, CEO Dieter Zetsche said during a show floor interview. But that’s not for lack of trying. Working with his outgoing partner, Chrysler President (and soon to be Mercedes chief) Wolfgang Bernhard, the management duo is trying to build a business case that would support production of the 800-horsepower two-seater. “It will have to stand on its own,” Zetsche stressed, and that means it must make a true profit, not just serve as a money-losing halo car for the brand. “We’d love to do it,” Zetsche underscored, and hinted that the goal is to “make the decision this year.” 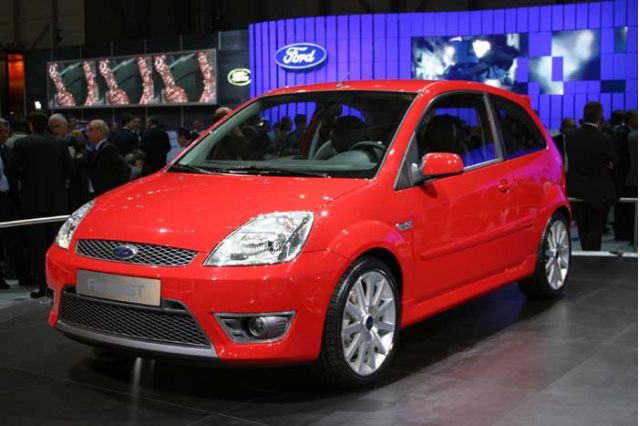 Did Ford simply run out of new product for this year’s Geneva show? That was a question plenty of folks were wondering when the ailing automaker limited its news conference time to several spin-offs of its long-running Fiesta lineup. That includes the Fiesta ST, the successor to the first Fiesta ever to top 100 mph back in the 1980s, along with the prototype Fiesta Team RS. Despite the low-key event, Ford of Europe’s new CEO, Lewis Booth, pointed out that the automaker has unleashed a virtual tidal wave of product in recent times.  By the end of this year, it will have launched 45 new vehicles in a five-year cycle, “and we have every intention of continuing that pace into the next five years.”

The fourth quarter brought some much-needed good news for Ford’s struggling European operations in the form of “an encouraging profit,” said CEO Lewis Booth. Even so, total 2003 losses hit $1.1 billion. An aggressive new restructuring program should help cut losses to somewhere between $100 million and $200 million in 2004, Booth forecast, though the final outcome is also likely to depend on the health of the stuttering European economy. With demand flat, Booth believes there will be “moderately negative pricing,” meaning the sticker on the typical Ford of Europe vehicle could slip by as much as one percent this year. Such problems took Ford by surprise and created some chaotic conditions inside the company, including the management shake-up that brought the executive to Europe from his post at the helm of Mazda Motors. “The pace of change in (the) European (market) was faster than we read and the pace of economic recovery was slower,” Booth conceded. Now, he added, Ford is simply struggling to catch up with market realities. 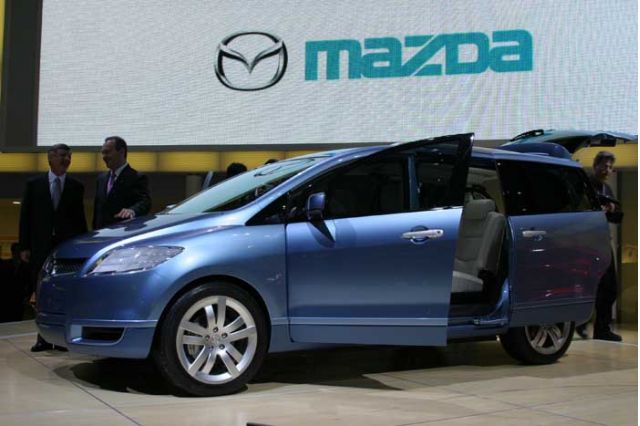 Traditional sedans were in surprisingly short supply during this year’s Geneva Motor Show preview. Perhaps that reflects the reality of the European market, where the downsizing trend has led motorists to demand more functionality.  With the MX Flexa, the goal for designer Koichi Hiyashi was to create a smaller version of the Mazda MPV that was not only practical, but which added “the emotional factor,” or what he described as a “zoom-zoom space wagon.”  The interior features a highly flexible seating and cargo system accessed through a sliding side door. Don’t dismiss the Flexa as just another quirky concept, stressed new Executive Vice President John Parker. “We’ll be back in in September with a production version of the MX Flexa.” 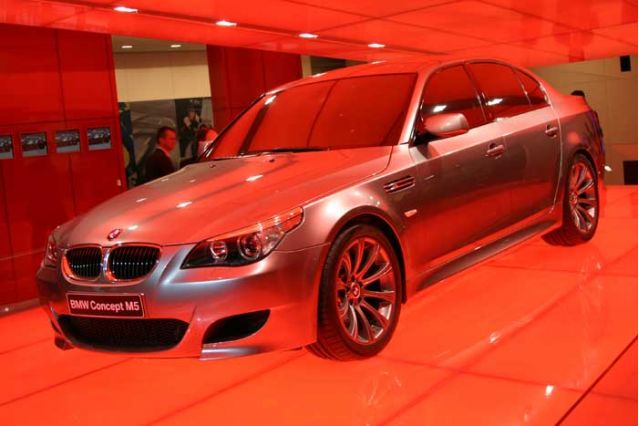 Don’t let the subtle design fool you. The all-new BMW M5 isn’t just a tuned-up version of the standard 5-Series. It boasts “Formula One technology and power,” declared Ulrich Bruhnke, the new head of the automaker’s high-performance M division (and formerly head of rival AMG, the muscle division of Mercedes-Benz). The latest incarnation of the M5 features a new, high-revving V-10, the first ever in a production sedan. It’s 500-inch displacement punches out a full 500 horsepower. Officially, the Bavarian rocket is just a concept vehicle – but just for the moment. That’s because of curious rules at the Geneva Motor Show. In reality, revealed Bruhnke, “You can expect the introduction of a production model before the end of this year.”  Over the years, BMW has been cautious about building up its M lineup, often dropping a particular model for a year or more before offering up a replacement. But that is apparently about to change, Bruhnke hinted to TheCarConnection. In his previous position at Mercedes, the affable executive oversaw a grand transition; there are now AMG versions of virtual all of the automaker’s products, even the big G-Class SUV. Bruhnke wouldn’t say if BMW would go the same, precise route, but he did say that there will be “many more” M models added in the next few years. 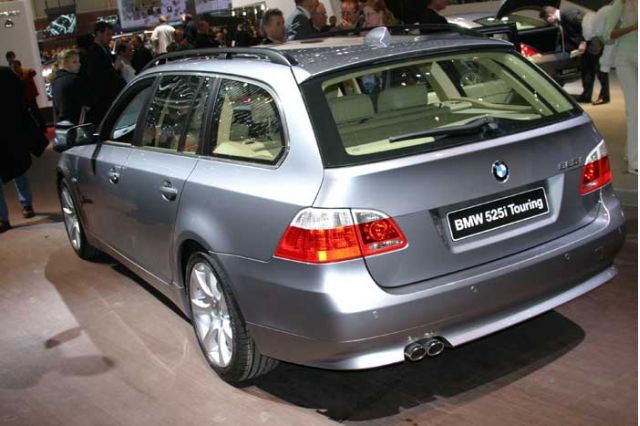 The Bavarian automaker also rolled out a bit more of a mainstream model in the form of the all-new 5-Series Touring – the German shorthand for station wagon. The new model is a good bit more sporty than the old Touring edition. A variety of diesel and gasoline engines have been lined up for various global markets, including the 333-hp V-8 in the big 545i. All the wagons will come with rear air suspension systems. And they’ll offer a good bit more cargo space than the prior model, 17.6 cubic feet with the rear seat up, and a maximum of 58.2 cubic feet.
Tags:
Body Engine Geneva Motor Show May Products road Auto Shows
2021
The Car Connection
See the winners »
2021
The Car Connection
See The Winner and Nominees »