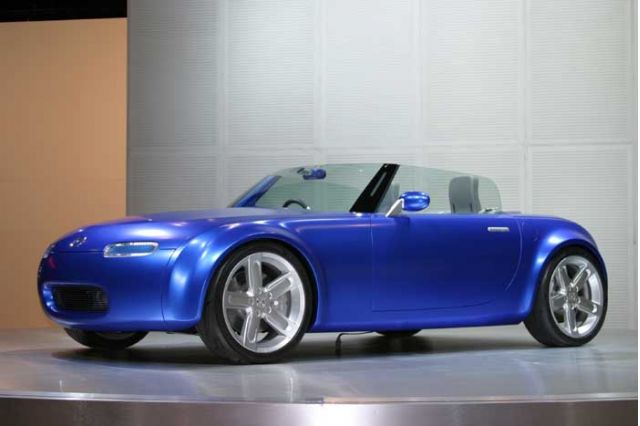 Wondering what the next-generation Mazda Miata will look like when it hits the street about two years from now? Then take a close look at the Ibuki concept vehicle, which made its North American debut at the Chicago Auto Show this week. The edgy little roadster “is not the next-generation Miata,” cautioned Mazda exec Robert Davis. Well, not exactly. While the show car is a foot shorter than the current Miata and smaller than the third-gen roadster now under development, the Ibuki hints at much of what’s to come. Its powertrain is pulled back 16 inches and lowered an inch. The heating/cooling system has been pulled back, as well. Interior and exterior design cues have been carefully integrated. The Ibuki “is giving us some direction and cues to what we’ll see,” said Davis. Mazda has high hopes for the next Miata, which will replace the nation’s best-selling roadster. It does face some challengers, though, with much of the attention focused on the ’06 Pontiac Solstice. “We’ve taken on all comers,” Davis said smugly, noting the likely demise of the Toyota MR2 and the weakening sales performance of the Honda S2000. 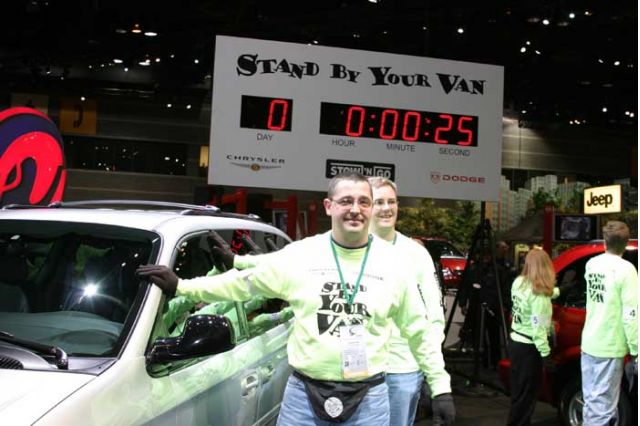 Stand by your van

It takes plenty of training to prepare for the typical marathon. But we’re not quite sure how you get ready for Chrysler’s Stand By Your Van marathon, where twenty contestants are competing to see who’ll get a brand new minivan. The rules are fairly simple: contestants simply need to keep a hand on one of the minis on display at Chrysler’s Chicago Auto Show exhibit. But the fine print is where things get difficult. The twenty eager entrants won’t be able to sit, squat or even lean against the vehicles. They’ll get a grand total of fifteen minutes every three hours to run to the bathroom or call their therapists.

There are plenty of performance cars out on the road these days, but Jaguar’s betting some buyers are looking for more than muscle. For the moment, the XK-RS is simply a show car, but that could change, company officials hint. Developed by Rocketsport Racing, the high-gloss black sports car prototype “is the ultimate XK-R – a beautiful car that goes very, very fast,” pronounced George Ayres, Jaguar’s director of marketing. Borrowing some design cues and technology from the track, the RS “was designed to be 100 percent functional,” declared Rocketsports’ Paul Gentilozzi. The track XK-R’s engine has been bumped from 4.5 liters to 5.0, and mated to a six-speed sequential gearbox. The package puts out 550 horsepower and a tire-smoking 550 lb-ft of torque. While final numbers haven’t been validated, Gentilozzi says the running prototype should launch from 0-60 in under four seconds and be able to yield cornering numbers in excess of 1G. “Our goal was a 200-mph cabriolet,” he explained. Asked what the odds are that Jaguar would build the RS, Ayres replied that “in current form, probably low.” It appears to be more likely that the automaker will wait until an all-new version of the sleek XK line is introduced in late 2005. The product could help revitalize the image of Jaguar which, said Ayres, “is a sports-car company at its core.”

Subaru Back with New Outback

It helped define what has become one of the fastest-growing automotive market segments. Now Subaru is back with an all-new version of its Outback crossover vehicles. The ’05 adds an inch to Outback’s wheelbase, and two inches to the overall length. Ground clearance increases, as well – to 8.7 inches on the Outback XT and 8.4 inches on all other models. The performance-based XT version features a 250-horsepower powertrain. Towing capacity runs as high as 3000 pounds on six-cylinder models. The new Outback gets a variety of new safety features, including front, side and head curtain airbags. The interior has also been upgraded to provide a more luxurious appearance. Subaru already touched off a bit of a controversy with its new Outback, weeks before the wagon made its debut at the Chicago Motor Show. That’s because the ’05 Outback will now be counted in the federal government’s light truck category, rather than the passenger car list. The move was designed to make sure Subaru didn’t fall short of minimum fuel economy standards, though Adcock insisted the switch was driven “by customer demand.” Ironically, the ’05 Outback actually will achieve about a five percent improvement over the old model’s mileage. 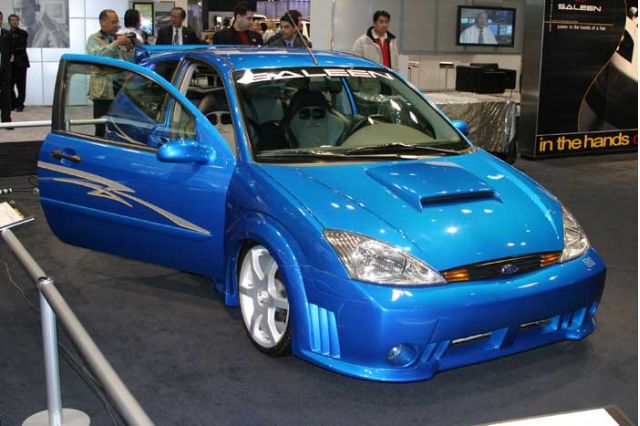 If you don’t win the race, you can always use the nitrous oxide tank on the new Saleen Focus for a good laugh. The modified version of Ford’s mainstream subcompact is the latest addition to the line-up of California-based Saleen, the nation’s largest “tuner.” The package includes an all-new instrument panel, a sporty aero-assist package that includes a rear wing, and tweaks to the engine that boost the 2.3-liter powertrain to 150 horsepower. If that’s not enough to dominate, the car is pre-equipped with a complete nitrous oxide injection system. Order a tank from Saleen and tell everyone to stand back. At the other extreme, Saleen has made some small but significant modifications to its $430,000 S7 supercar. The low-slung supercar’s rear wing and underbody tunnel have been tweaked to improve downforce. That helps lower 0-60 times to less than 3.0 seconds, said company founder and CEO Steve Saleen. 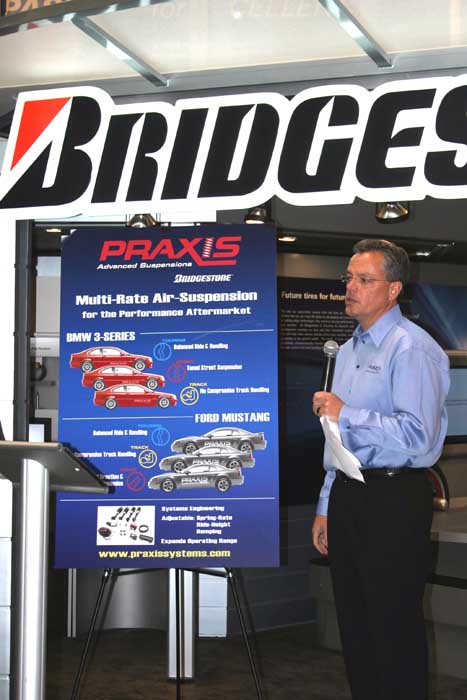 If the name, Bridgestone, brings tires to mind, think again. The Japanese-based supplier has introduced a new, aftermarket suspension system designed to provide a fast fix for those with a need for speed. Traditionally, the motorsports minded have had to purchase individual components, such as springs and bushings, from different vendors, then hope they all will work together. The goal of the Praxis system is to provide an integrated suspension package for specific vehicle lines. The first two to hit the road are the BMW 3-Series and Ford Mustang. Once installed, a motorist can easily switch the suspension between three different street and track modes. More vehicle lines will be added in the future, Bridgestone officials promised.

Nissan Says It’s All in the Family

Any resemblance between Nissan’s new Frontier pickup and the company’s recently-launched Titan full-size truck is strictly intentional. “We’re building a family of trucks,” explained Gene Brown, Frontier’s model line manager, during a sneak preview at the Chicago Auto Show. While it’s not uncommon for various models in a manufacturer’s line-up to look a lot alike, the Titan and Frontier, said Brown, “share more things than looks.” Most notably, the big Titan’s frame has been shortened and narrowed. And Frontier gets a modified version of the full-size pickup’s V-6. Here, it’s a 250-horsepower, 270-lb-ft, 4.0-liter package. The truck shown in Chicago featured a locking rear differential, Bilstein gas shocks, a “smart” limited-slip system and several other Titan features, including a spray-in bedliner and bed-mounted tie-down rails. The Frontier will deliver more than 5500 pounds of towing capacity.