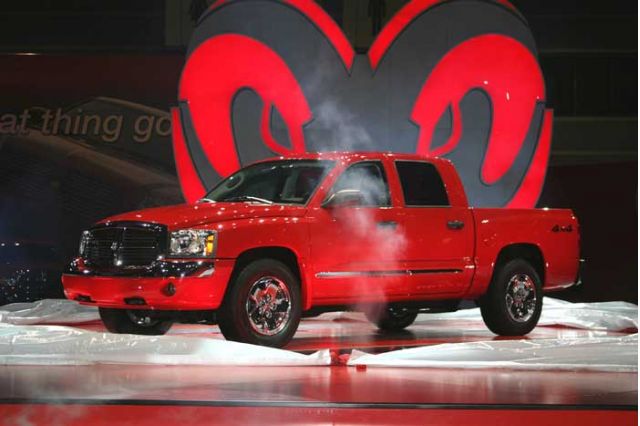 Dodge says it's the biggest and best of the mid-size trucks with the new 2005 Dodge Dakota, a redesign of which debuted Wednesday. The new Dakota will go on sale this fall, offering the only V-8 in compact truck segment. It gets brand-new sheetmetal and a new fully boxed frame, new front and rear suspensions and a pair of V-8 engines. Dodge says the new Dakota is 3.7 inches longer and 2.7 inches wider than before, and retains its 7000-lb towing capacity. The standard engine is a 3.7-liter Magnum V-6 with 210 horsepower; a 4.7-liter V-8 has 230 horsepower and the new High Output Magnum V-8 will sport 250-plus horsepower, Dodge says. The Dakota will only come as a four-door: in Club Cab configuration the doors are rear-hinged, and in the Quad Cab front-hinged. Dual-stage front airbags and an occupant-sensing system for the passenger-side front airbag are standard, while side-curtain airbags are an option. 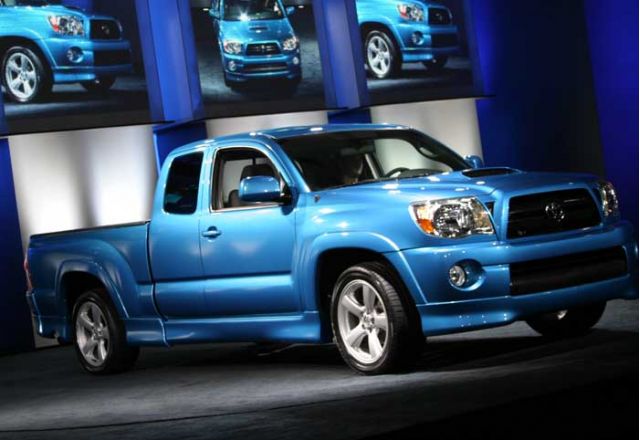 Toyota plans to hold on to a big chunk of the compact pickup truck market by building four separate versions of the Tacoma.  The sportiest of the four-models, the Tacoma X-Runner, was unveiled Wednesday during the press previews at the Chicago Auto Show. Compared to the previous Tacoma S-Runner, the X-Runner will ride on a wheelbase that has been extended by more than  five inches and widened by  four inches, which also translates into an extra 4.5 inches of interior shoulder and hip room,  Esmond said. The four-door X-Runner will also come with 240-horsepower 4.0-liter V-6 engine with 275 lb-ft of torque and a six-speed manual. A factory-warranted supercharger system that boosts output to 300 horsepower is optional. X-Runner hardware includes eighteen-inch wheels, large diameter stabilizer bars, and stiffer bushings, with ground effects, a hood scoop, and fog lamps to complete the package. Esmond, however, said after the press conference that the X-Runner is only part of the Tacoma story for the 2005 model year. The X-Runner is the low-volume piece of the Tacoma roll-out. “We’ll probably do only 2000 or 3000,” Esmond said. But three other versions of the 2005 Tacoma are also in the works, Esmond said, including a the standard B-cab version, an access cab and an extended-cab version. Toyota has sold compact pickup trucks in the United States for 40 years, Esmond noted, and it now has 21 percent of the segment, selling roughly 154,000 in 2003. The goal is boost total Tacoma sales to around 175,000 units in 2005, added Esmond. The Tacoma is vital to Toyota because it attracts the youngest buyers of any Toyota-brand vehicle. “Like no other vehicle in our lineup Tacoma has held the anchor position in attracting large numbers of young  buyers to the Toyota family,” Esmond said.  Scion is aimed a very young and very urban and very influential segment of inside Generation Y, he noted. “It is however,  only a small portion of the Gen-Y pie. The larger portion of the pie is comprised of a more traditional — more mainstream — consumer. And that’s the portion that we will target with the all-new next-generation Tacoma,” he said. —Joe Szczesny

Mercury Montego Gets A Crossover Sister 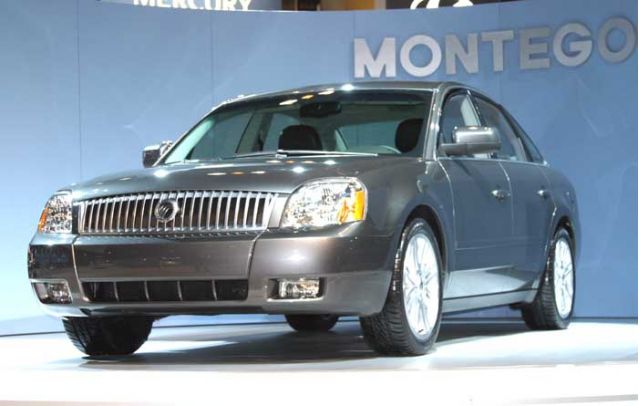 Ford showed the Mercury Montego sedan in the metal Wednesday and announced it will build a Ford Freestyle-like crossover sister for the Mercury.

Look for grille and interior similarities to the Montego and Mountaineer and Mariner SUVs in the new crossover, which is yet to be named. The odds are good however it will start with an “M.”

The Montego, like the Ford Five Hundred and Ford Freestyle, has an all-wheel-drive option courtesy of Volvo, though standard Montegos will be front-wheel drive. The Montego is powered by a 3.0-liter Duratec V-6 engine, with a six-speed manual transmission standard and a CVT transmission available. Ford officials believe more than 50 percent of sales volume with be with the CVT, because of early complaints by journalists and even some of its own engineers that the 3.0-liter Duratec is underpowered. One Ford official said the company was planning powertrain upgrades by the third year of production at the latest.

Ford is already looking at upping previously planned Mercury production at the plant, because of the higher transaction prices the company believes the Mercurys will bring. Unless sales for all four vehicles falter, says Ford North America chief Jim Padilla, relatively few, perhaps just five percent of production, will wind up in rental fleets. Ford officials believe 60 percent of Ford production at the plant will be Five Hundreds, with 40 percent Freestyle, but they also say it could be more like 50/50 if Freestyle sales outrun Five Hundred.

Pricing for the vehicles, due in late spring and early summer, haven’t been announced. But one Ford executive said a loaded Freestyle with all-wheel-drive will cost about what a two-wheel-drive Pacifica costs before any other options are added, or about $30,000.

Buick Has A LaCrosse to Bear 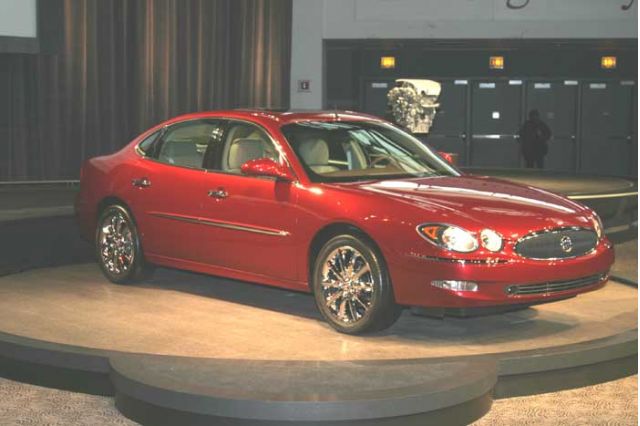 Better late than never when it comes to Buick’s new mid-size sedan. The ailing GM division’s 2005 LaCrosse will replace two aging sedans, but the Regal and Century had to stick around an extra eleven months on orders from “car czar” Bob Lutz. One of several programs Lutz halted in midstream, he ordered a complete exterior redesign for LaCrosse, as well as an upgrade to its suspension, interior, sound insulation and powertrain options. “We were deficient” in the car originally scheduled for production, Lutz acknowledged during a preview at the Chicago Auto Show. “The additional eleven months allowed us to fine-tune…the car.” For one thing, he boasted that the LaCrosse will be one of the quietest cars on the road. But forget the classic Buick boulevard ride; it’s been given a more European-tuned suspension. Buyers will have two powertrain options: the classic 3800 V-6, rated at 200 horsepower, and the newer 3.6-liter V-6 rated at 240 hp. It will later be modified for GM’s new Displacement on Demand system, which disables half the engine’s cylinders during low power demand to reduce fuel consumption. The four-door’s design is reminiscent of the jellybean styling first seen with the Ford Taurus, though it carries a variety of traditional Buick cues, and a level of refinement not seen in Buick models for many years. “This level of refinement will be reflected in all future Buicks,” promised Gary Cowger, president of GM’s North American operations, noted that the company will invest $3 billion in new Buick products over the next five years. That’s critical if the automaker hopes to turn around a brand that has been steadily fading over the years. —TCC Team 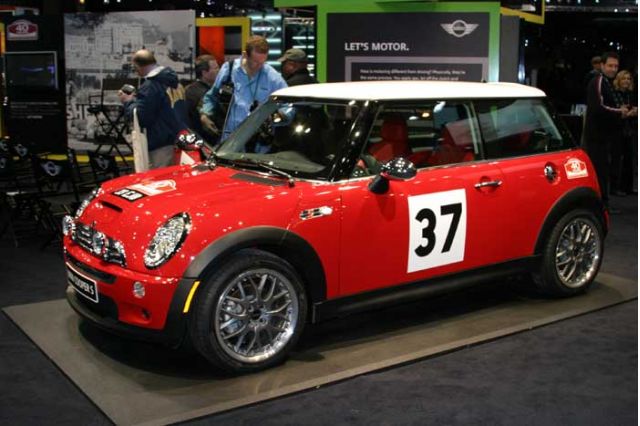 MINI’s new Cooper S MC40 edition celebrates an occasion most of its younger buyers won’t even know about. The Chili Red commemorative MINI is an homage to the brand’s win in the 1964 Monte Carlo Rally. MINI promises to build 1000 copies of the special Cooper S MINIs, all red with a white roof. Priced from about $27,000, the special edition will also come with magnetic (hence, removable) decals bearing “number 37” as did the winning 1964 Cooper. 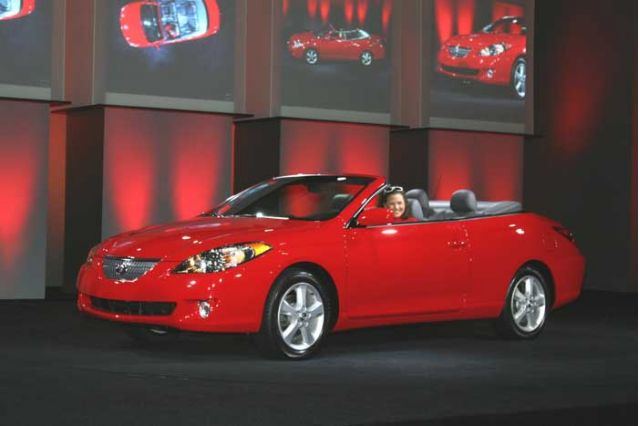 Toyota is hoping to attract younger buyers with the 2004 Solara Convertible, said Don Esmond, senior vice president and general manager of Toyota as he unveiled the new convertible at the Chicago Auto Show.

Esmond stressed that the new Solara is more than a converted Solara coupe. The Solara has a wholly dedicated conversion that’s free of chopping the top and retrofitting for structural integrity, Esmond said. The frame-and-body construction also features reinforcements in key areas that gives the car higher torsional rigidity, which givers the cars better ride and handling and curbs road and wind noise. The increase in rigidity also will improve durability. Toyota engineers also deliberately cut the gaps between interior parts from 1.5 millimeters to 0.5 millimeters, Esmond said. “Such close tolerances result in a look and a feel of extreme high quality and refinement. Even more important, however, is that such precision results in cars that will retain its structural integrity over many years,” Esmond added.

The Solara convertible also features a one-button power top with a full headliner and large rear glass. The roof also is stored below the beltline to improve appearance. A 3.3-liter V-6 engine is mated to a five-speed sequential transmission with a manual mode; a rear spoiler and 17-inch alloy tires are also standard on the convertible, Esmond said. The elimination of the need for an outside conversion process also cut costs, he noted. “The cost efficiencies gained were enormous and those savings will be passed along to the customer,” added Esmond, who said he expects sales of Solara convertible to account for 25 percent of the all Solara sales going forward. —Joe Szczesny 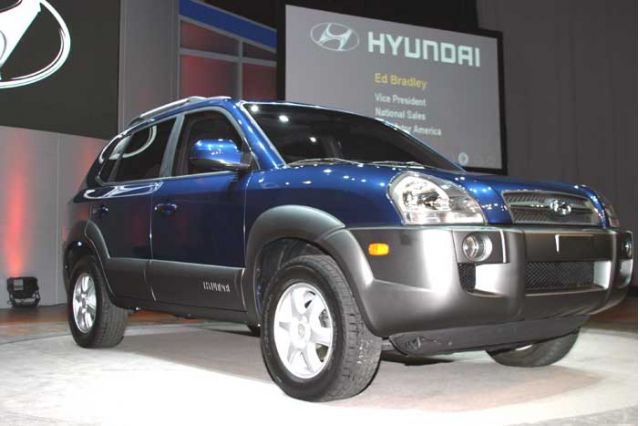 The compact Tucson crossover ute will be Hyundai’s new entry-level truck, execs for the Korean brand said in Chicago on Wednesday. Smaller than the Santa Fe, the 2005 Tucson arrives this summer with a choice of four-cylinder or V-6 engines, a flexible interior and available all-wheel drive. The interior has seats for five; the rear bench splits and folds forward, and when coupled with the folded front passenger seat, creates a long cargo area than some compact utes. The Tucson comes with Hyundai’s 2.0-liter four and front-wheel drive in base GL models; GLS and LX models get the company’s 2.7-liter V-6. All Tucsons come with six airbags, including side curtains for both rows, standard. All-wheel drive can be ordered with either engine. Four-wheel disc brakes are also standard, along with 16-inch alloy wheels, air conditioning, power windows and door locks, tinted glass, and roof rack side rails.

Bentley’s Mulliner R: Not For Everyone 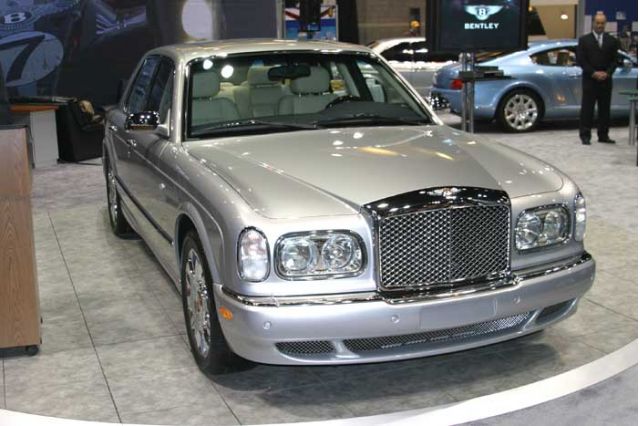 Despite adding a modern assembly line to its plant in U.K. a few years ago, Bentley is not a brand you’d associate with mass production. That’s all the more true when it comes to the Arnage R by Mulliner. The Volkswagen subsidiary plans to produce a grand total of just 26 of the big sedans, at a starting price of $212,990. How much more a buyer might pay is “limited only by the customer’s imagination — and their budget,” noted Alasdair Stewart, CEO of Bentley Motors, Inc. “We completely craft (the Mulliner R) to the customer’s specification.” The Mulliner edition starts out as a basic Arnage R, with a 6.75-liter, twin-turbo V-8 putting out 400 hp and capable of launching from 0-60 in 5.9 seconds. —TCC Team

The Chicago Auto Show will take up even more space starting in 2005, the Chicago Auto Trade Show announced Wednesday. For the past five years,  the Chicago show has occupied 840,000 square feet in the South Building at McCormick Place and next year it will add another 369,000 square feet in adjoining North Building, which means the entire show will cover more than 1.2 million square feet when it opens next year. “Manufacturers are clamoring for bigger and more elaborate displays but other venues are unable to accommodate them Chicago offers the immediate solution to the problem,” said Jerry Cizek, the shows general manager.  Mayor Richard Daley noted the show regularly draws thousands of visitors into Chicago. Another testimonial to McCormick place came from William Clay Ford Jr., the chief executive officer of the Ford Motor Co. Ford told the Economic Club of  Chicago that automakers “would love to have a facility like this in Detroit.” Discussions on replacing Detroit’s Cobo Hall, the site of the North American International Auto Show, are just beginning. —Joe Szczesny