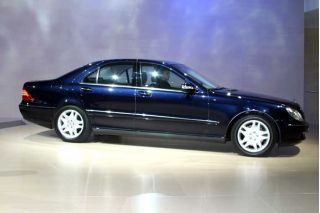 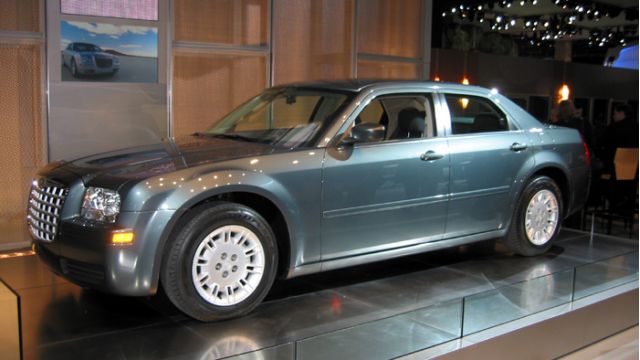 Chrysler will strike back at the heart of the mid-size sedan market with its aggressively priced rear- and all-wheel-drive 300C/Dodge Magnum sedan and wagon this spring. Chrysler Group CEO Dieter Zetsche told Detroit audiences the Magnum would be priced from $22,495 for a rear-drive Magnum SE with a 190-hp, 2.7-liter V-6 engine, to $29,995 for a HEMI-powered model; the Chrysler 300 series will start at $23,595, with a 340-hp HEMI 300C checking in at $32,995 before options. The cars will be the first in the Chrysler lineup to sport cylinder-deactivation technology, which Zetsche said could improve the fuel economy of the 5.7-liter HEMI V-8 by as much as 10 to 20 percent. HEMI-equipped 300s will be capable of 0-60 mph runs of 6.3 seconds, he added. Zetsche reminded the Detroit audience that Chrysler will replace a third of its product lineup in the next twelve months, representing 60 percent of its production volume, and will spit out 25 new models in the next 36 months. —Marty Padgett 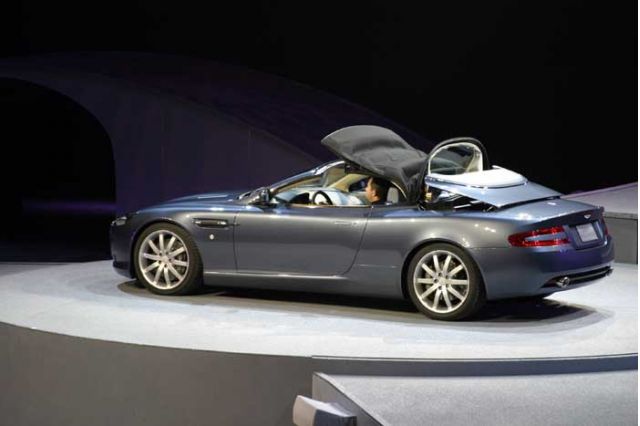 Aston Martin has already taken a year’s worth of orders for its new DB9, the sports coupe set to go on sale in the U.S. in late spring, said CEO Ulrich Bez. Now it’s hoping to line up even more deposits as it unveils the DB9 Volante. The convertible top is raised or lowered with the push of a button and folds behind a hard tonneau cover. The whole operation requires just 17 seconds — less than the time it takes to say, “I am rich.” You probably need to be, though, because the new Volante will set you back a cool $168,000, with the hardtop DB9 coupe going for $150,000. The Volante is the core of the new Aston, which set a worldwide sales record of 1500 cars last year. The DB9 alone is expected to ring up 2000 sales in 2004. 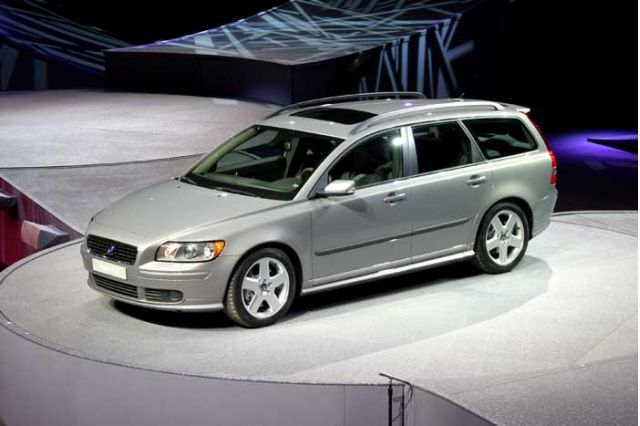 Volvo rolled out its all-new V50 wagon during its allotted moment in the Detroit sunshine. Based on the same platform as the new S40 sedan, the V50 takes aim at young, hip buyers who don’t see a contradiction between safety and performance. The wagon will be offered with a choice of a 2.5-liter normally-aspirated engine, or in the T5, with a turbocharged, 218-horsepower 5-cylinder powertrain. All-wheel-drive is expected to become a popular option, especially on the T5 version.

Volvo is getting ready to introduce two new safety technologies that should qualify as world-firsts, including BLIS, its blind spot sensing system. Virtually every driver knows what it’s like to begin changing lanes, only to discover another vehicle hidden just out of view. BLIS uses a door mounted camera to monitor a 10-by-31-foot space alongside the vehicle, sounding a warning when it spots danger. It will react to a car, truck or even a motorcycle moving from 12 miles-an-hour slower to up to 43 mph faster than your own car. Look for BLIS to be launched late this year. The second safety breakthrough could show up on the next new Volvo convertible. With no fixed roof, ragtops normally cannot be equipped with side curtain airbags, which are normally mounted on the inner roof edge. Volvo says it has solved the problem by turning the inflatable cushion upside down and mounting it in the top of the door. The system is designed to work even if the window is open or broken, and deflates more slowly to add a cushion of air during a vehicle rollover.

The Swedish automaker helped put Ford’s struggling Premier Automotive Group back in the black last year by rolling up record worldwide sales. The story was particularly good in the U.S., where sales soared 22 percent, said Volvo’s U.S. CEO, Vic Doolan. Thanks to strong demand for its XC90 and XC70 light trucks, the carmaker sold 135,000 cars in the States, despite a downturn in its sedan volume. Doolan declared 2004 “will see an intensification of our performance.” In an interview with TheCarConnection.com, Doolan said he’s targeting sales of 200,000 vehicles a year in the U.S. by 2010, a forecast he stressed was conservative. Adding all-wheel-drive to its option list will play a significant role, he suggested, and should help underscore Volvo’s focus on safety — as well as its increasing emphasis on performance. 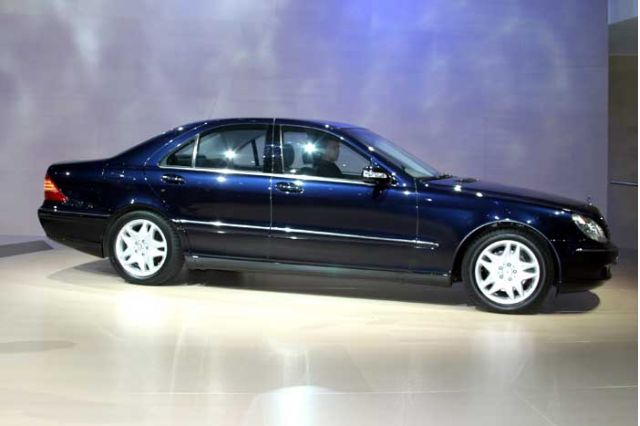 European automakers have, until now, shown virtually no interest in hybrid powertrain technology. Things changed on Monday, when Mercedes-Benz rolled out not one, but a pair of hybrid-electric vehicles designed to show that you can save fuel without sacrificing performance or your upscale image. The S-Class HEV mates a V-6 engine with two electric motors which, all together, produce a peak 309 horsepower. That’s enough to launch the big sedan from 0-60 in 7.5 seconds and hit a top speed of 155 mph. Mercedes chief executive, Juergen Hubbert, dubbed the prototype the “world’s first rear-drive HEV concept,” and suggested that in production, it would yield a 20 percent savings in fuel compared to a comparable, conventional S-Class. 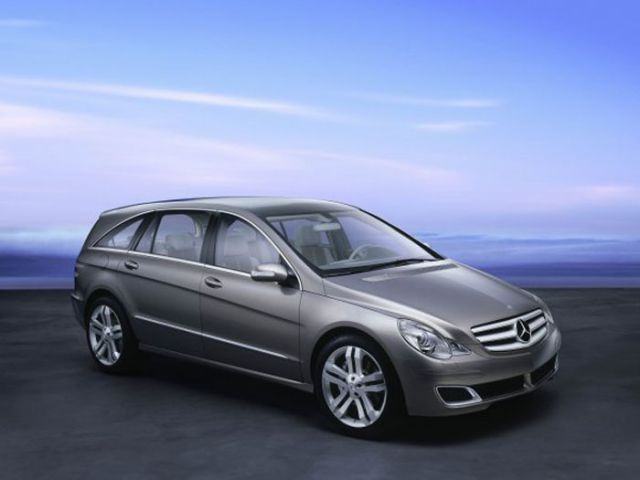 The automaker also debuted a version of its upcoming crossover, the Vision Grand Sports Tourer, with a V-8 diesel-electric motor hybrid. While still giving 0-60 times of under 7.0 seconds, the 314-hp package could yield 30 miles per gallon. Hubbert told TheCarConnection Mercedes is still not sold on hybrid technology. But while the automaker believes hydrogen fuel cells are the ultimate answer, they are “taking longer” than expected to get to market. So, “a bridging technology” may be needed in the meantime. One of the two hybrid systems could reach market within “the next two to three years,” according to the senior executive.

Mercedes has another high-mileage option in its parts bin. In Europe, diesels are now the option of choice for the majority of upscale motorists. And the automaker is hoping to bring the technology back to the U.S., where diesels accounted for as much as 70 percent of Mercedes volume in the years immediately after the last oil crisis. The automaker unveiled the E300 CDI, a diesel version of its popular E-Class series, which will go on sale in April. Due to strict new emissions standards in California and several other states, the E300 CDI will be available only in 45 states, at least until 2006, when low-sulfur fuel becomes available in the U.S. In turn, that will permit Mercedes to import a new and cleaner diesel engine.

There seems to be a theme at General Motors this year. A variety of vehicles first shown as concept cars are making the transition into production. That includes the sleek G6, Pontiac’s replacement for the aging Grand Am. Though based off the same platform as the Chevrolet Malibu, the Pontiac sedan features a more forward-mounted windshield, lower roofline, and a more coupe-like shape, giving it, in the words of designer Brian Nesbitt, “an aggressive, firmly-planted road stance.” The ’05 G6 will launch in two versions, a 200-horsepower GT and 240-hp GTP. A coupe and a convertible will follow later. The G6 is part of a broad campaign designed to restore the performance image of Pontiac. It joins a rapidly-expanding line-up that also includes the new GTO muscle car and Solstice sports coupe. Both of those models also made their debut in concept form. 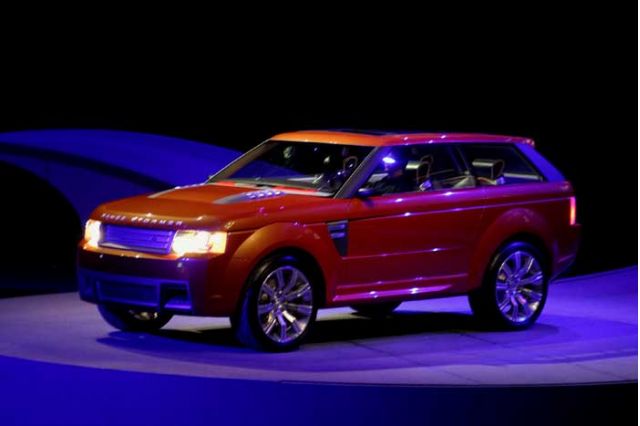 With its sharp-edged, aggressive stance and scissors doors, the Range Stormer is definitely not your traditional Land Rover. It’s not meant to be. The concept truck is designed to hint at a “more inspirational” styling theme for the British brand, a subsidiary of Ford Motor Co., said Managing Director Matthew Taylor. The Range Stormer “won’t go on sale,” he cautioned during a press preview, “but it hints” at what’s to come. Indeed, several company sources said many of the Stormer’s design elements will reappear on a new Sports Tourer, one of several vehicles set to replace the aging Land Rover Discovery next year. Land Rover intends to reposition itself as a true luxury brand, sources added, but Taylor stressed the company will continue to build serious off-road capabilities into all of its future products. The Range Stormer will feature a variety of new technology, including Terrain Response, a user-adjustable system that automatically regulates a variety of vehicle systems, including suspension and throttle. Terrain Response is expected to go into production shortly.

Sixteen Still In GM's In Box

The hit of last year’s North American International Auto Show, the Cadillac Sixteen show car is anything but a forgotten concept, said GM “car czar” Bob Lutz. The massive sedan, with its 16-cylinder engine, served as the model for a project under development dubbed ULS, for Ultra Luxury Sedan, the GM Vice Chairman revealed. What’s under development “would be a vehicle roughly in the category” of the Sixteen, though Lutz cautioned that final details are far from certain. Among the uncertainties: how big and engine to use, though it would very likely be “larger than eight cylinders.” While there’s no guarantee the ULS/Sixteen will ever reach market, Lutz stressed “It is clear Cadillac can go up (-market) and probably must go up. If we’re to reestablish ourselves as the standard of the world, we have to do an uncompromising vehicle only a few people around the world can afford.”

Growth Not Driving Force for Nissan

Sales growth is not the key for Nissan, said CEO Carlos Ghosn, during a auto show roundtable discussion. “We are using growth as the pillar for profitability,” he stressed. Of course, Ghosn wouldn’t mind seeing sales and market share continue to rise, as it did in 2003. In , volumes soared 14 percent, to 571,000, while sales hit 794,000 in the , a 7.4 percent increase. Worldwide, the numbers came to 3.04 million, and Ghosn forecast that will hit 3.6 million by the end of 2005. But he stressed that Nissan will not launch any product that it cannot expect to earn money. The resurgent automaker also will not match the heavy incentives of some of its competitors just to gain share. The company’s biggest problem, said the Brazilian-born executive, is a shortage of engineering talent. That is forcing it to delay some of the products it needs to become a “total global” company. Nissan hired 1000 engineers just in last year, but it takes three to four years before they can be brought fully up to speed, Ghosn lamented. Should Nissan start closing in on its sales targets, Ghosn acknowledged, it could face another issue. “I have a capacity problem in in the mid-term.” That could force Nissan to add another plant, or to expand facilities such as its factories in and .