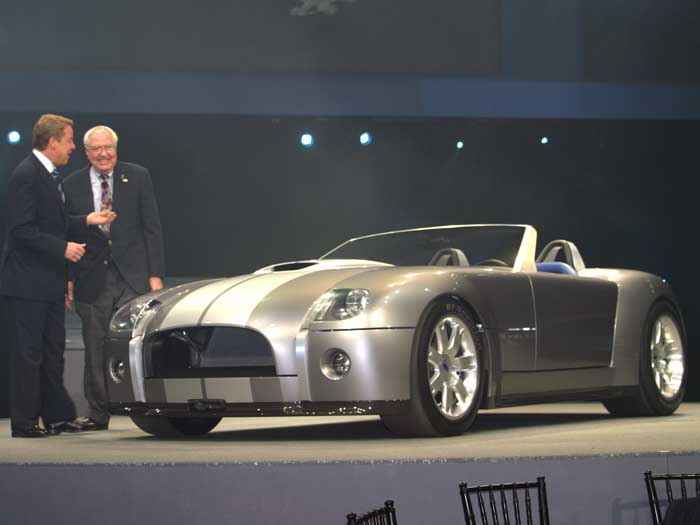 Don’t head for the showroom yet, but odds are looking good that the Shelby Cobra will be back in all new form in the not too distant future. Forty years after he first teamed up with Ford Motor Co., Shelby has renewed his relationship with the number two automaker, and the first product of that partnership took a bow during an auto show dinner Sunday night. Think of it as a “minimalist” muscle car, said Ford’s director of design, J Mays, “No roof, no side glass, no radio and, thank God, not a single cupholder.” But the reborn roadster does boast a 6.4-liter V-10 that, in normally-aspirated trim, puts out 605 horsepower and 501 lb-ft of torque through the car’s 19-inch rear wheels. That’s enough to launch it from 0-60 in under 4.0 seconds and deliver an ungoverned top speed of 190 mph. If that’s not enough, a supercharger  could “easily hit 700” hp, according to advanced product chief Chris Theodore. Like its crosstown competitors, Ford officials insisted that their new supercar is “just a concept,” but they didn’t work very hard to convince the crowd. “We built the Ford GT a year after we showed the concept,” conceded Mays, and we built the Mustang a year after we showed you that concept. You do the math. How much would a product Cobra add up to? Definitely less than the $139,000 Ford GT, and more likely in line with the Dodge Viper, in the $80,000 to $90,000 range, it appears. In production, Ford would likely add roll-up windows and a very basic, removable soft-top. 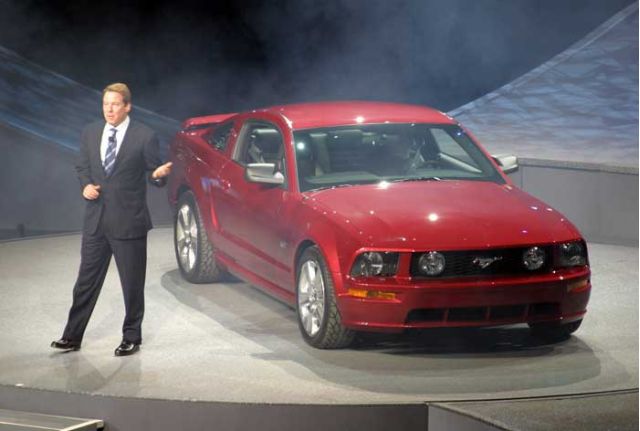 TheCarConnection learned firsthand how much interest there is in the new Mustang when it posted the first complete story about the production pony car Saturday night. It took three hours for the site’s servers to recover. What design chief J Mays called “The soul of the Ford Motor Co.” will take on a new look for 2005. Or an old look, if you prefer, the ’05 boasting a retro, ‘67 design but a very modern chassis, the first time that’s been reengineered since 1979. Initially, buyers will be offered two engine options, a 202-hp V-6 and a 300-hp V-8, both starting at under $20,000. A variety of packages will follow, including a new Mustang GT and the top-line Cobra. The new Mustang’s twin-binnacle interior also borrows liberally from the past, while making use of modern materials and new technology. That includes an instrument display system that lets an owner choose what color lighting to use.

Things weren’t quite as bad as everyone expected in 2003, but industry leaders seem to fear sounding too optimistic about 2004. The general consensus appears to be that sales for the new year should top 17 million. “The only question,” according to Joe Eberhardt, Chrysler Group executive vice president-global sales, marketing, and service, “is by how much?” The traditional industry forecasting tools just don’t seem to work anymore, added Ford Chairman Bill Ford. That’s likely the result of what he dubbed a “hellaciously competitive” market where incentives seem unbound by gravity. And unlike past years, where rebate-fed sales booms were followed by sharp downturns, there seems to be little “pull-forward” effect these days. The presidential elections could play a factor in the economic recovery, industry officials noted, but so could the fear of terrorism, said another insider, pointing to the recent string of international air flights canceled because of security concerns. Not surprisingly, the carmakers most bullish, also have strong new line-ups for the coming year. “With all our products,” said Eberhardt, “we’re confident about 2004.” 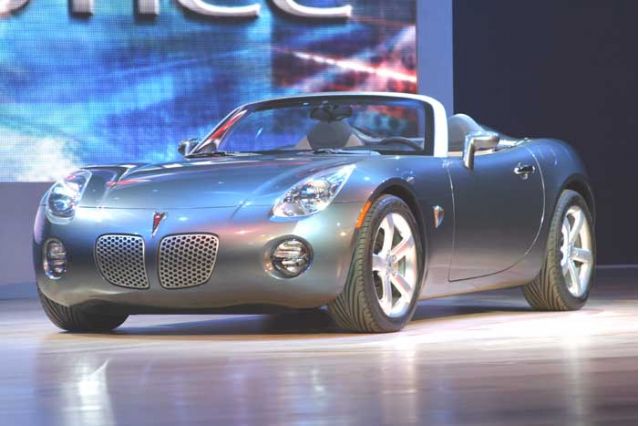 General Motors officially rolled out the production version of its Pontiac Solstice, two years after it first appeared in Detroit as a concept roadster. The transition from concept to customer wasn’t easy, requiring GM to develop the all-new Kappa platform to maintain what Vice Chairman Bob Lutz called “the emotional intent” of the original show car. The automaker also will hold to the concept’s proposed price tag of less than $20,000 for the base vehicle. The 2005 Solstice will boast a 2.4-liter Ecotec DOHC four-cylinder engine producing 170 horsepower and mated to a close-ratio, short-throw Aisin five-speed manual transmission. An automatic transmission will follow. 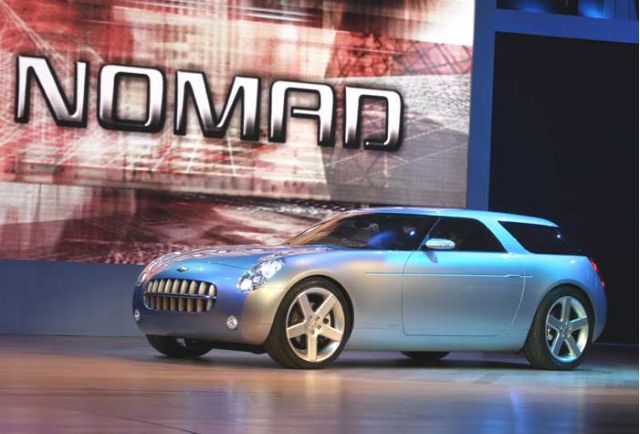 The Kappa “architecture” was designed to be particularly flexible, pointed out GM’s new design director, Ed Wellburn. That means it can be raised, lowered, shortened or lengthened in order to allow for distinctive new spin-offs. Two examples appeared during GM’s news conference. The Nomad borrows its name and design concept from a 1954 show car. It’s a difficult-to-characterize design that is part MINI Cooper, part Solstice and part station wagon. The Kappa architecture was raised, then stretched two inches to give Nomad 2+2 seating. And a turbocharged version of the 2.2-liter Ecotec engine makes 210 horsepower. Asked whether Nomad might see the lights of a showroom, Wellburn cautioned “there are no production plans.” Not yet, anyway, but he quickly added that “there’s an awful lot of interest in the company.” 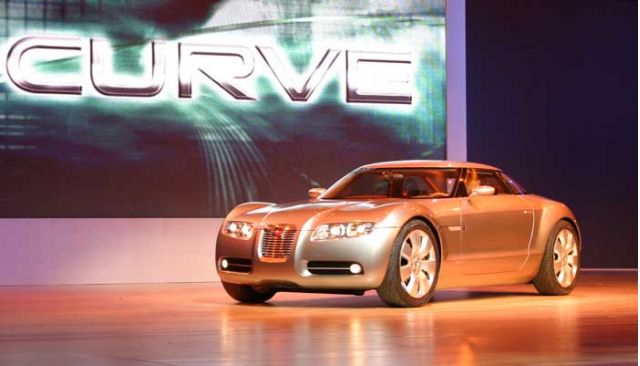 Saturn’s new Curve concept seems a bit less likely to make the transition to market — at least in current form, but it does suggest that GM sees the need to focus on adding more emotional design to the Saturn brand. "We wanted to do something for Saturn that's both expressive and attractive," explained Anne Asensio executive director of advanced products. "It's the first signal we're getting serious about Saturn." Under Curve’s clamshell hood sits a supercharged Ecotec putting out 200 horsepower. 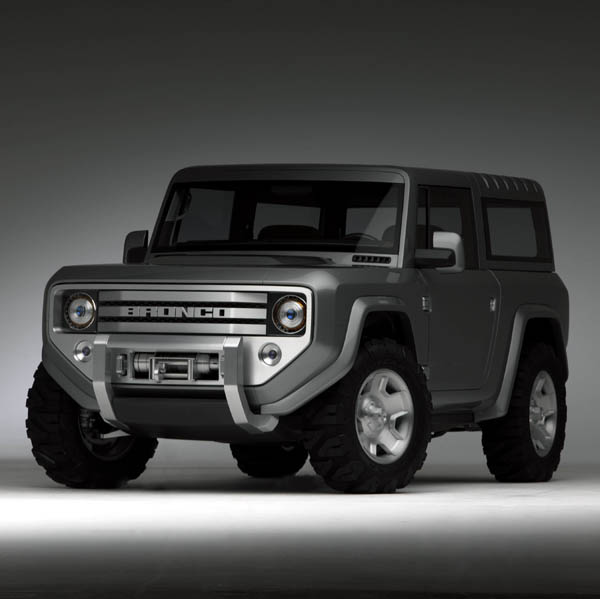 Whether it’s due to a shortage of new names, or simply a desire to rediscover its roots, Ford Motor Co. has resurrected the old Bronco nameplate, albeit in show-car form. The prototype looks “as if we started with a chunk of iron” and began milling it into a “piece of equipment, rather than a status symbol,” suggested Ford design director Mays. The most notable design elements included Bronco’s boxy, upright roofline, round headlamps and the Bronco nameplate etched into the three-bar grille. Slightly smaller than the Ford Escape SUV, the show car features a 2.0-liter common-rail Duratorq TDCi engine borrowed from Ford of Europe. The torquey little diesel can get a bit of added performance thanks to an onboard nitrous oxide injection system. 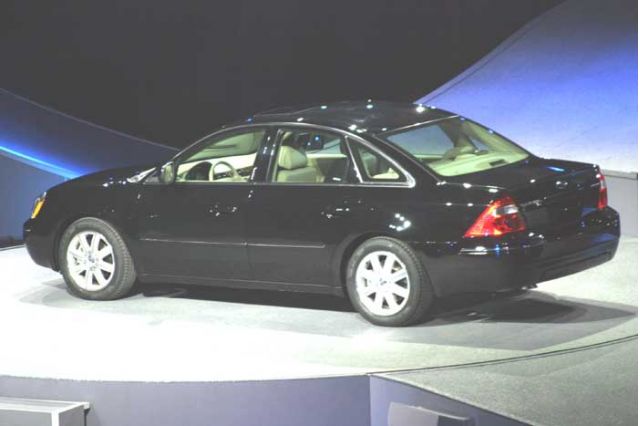 Ford officials keep insisting this is “the year of the car.” The North American International Auto Show gave them an opportunity to put up, rather than shut up. The automaker rolled out several critical passenger cars on Sunday, starting with the new Five Hundred sedan, one of several vehicles that will ultimately replace the aging Taurus sedan. The Five Hundred boasts a new layout designed to maximize interior space. Though significantly shorter than the Ford Crown Victoria, it has several inches more rear legroom — along with a trunk large enough to carry eight full-size golf bags. The new sedan will be offered in both front- and all-wheel-drive configurations. Though a six-speed will be available with the FWD package, a new, fuel-saving Continuously Variable Transmission will be the primary option mated to a 3.0-liter V-6.
Tags:
auto Detroit Auto Show Engine Marketing Products Auto Shows Diesel Industry
2022
The Car Connection
See the winners »
2022
The Car Connection
See The Winner and Nominees »