The new Volvo V50 wagon is out — well, at least in pictures. Volvo promises revolutionary interior design, class-leading safety, powerful five-cylinder engines and all-wheel drive for its new compact wagon, which gets the new alphanumeric designation in its second generation. Previously the Volvo small wagon was the V40. The new vehicle will be shown today at the Bologna Motor Show. The V50 goes on sale in the U.S. next summer.

GM To Bid on Ssangyong

General Motors may be preparing a bid for South Korea’s Ssangyong Motor, which builds sport-utility vehicles. Formerly a part of the Daewoo group, which GM now controls through a joint-venture, Ssangyong is expected to receive a bid from the GM Daewoo venture before Dec. 11. Korea’s banks are selling off their 55.4-percent stake in Ssangyong, Reuters reports.

Ford Motor Co. plans to reduce by 25 percent the number of vehicle architectures – or flexible vehicle platforms – it relies on for its North American lineup. While Jim Padilla, president of the N.A. region, didn’t put a precise timeframe on the reduction, it appears likely to occur over the next five years, a period during which Ford intends to launch 65 new cars and trucks. Meanwhile, Ford is in the process, according to Padilla, of reducing product development times by 25 percent, while he promised Ford “will see a 10 percent annual improvement in vehicle development efficiency compounded over the next several years.” The comments were made during a mostly off-the-record background briefing for automotive media planning to attend the Detroit auto show in January. While specific products can’t be discussed, Padilla made it clear he expects that for Ford, 2004 will be “the year of the car.” —TCC Team

Mays Not Taking Back Seat

As Daily Edition noted in yesterday’s edition, British designer Peter Horbury will be heading to the U.S. to become Ford Motor Co.’s Executive Director of North American Design. But don’t think the automaker’s vice president of design will be handing in his crayons. “I’ll still be heavily involved in design,” J Mays tells TheCarConnection.com. But by relinquishing most of the day-to-day duties working at the styling center in Dearborn, Mich., “It frees me up to concentrate more on the look and feel of (the various Ford) brands and every point of contact with their customers.” For his part, Horbury denied being a European is any disadvantage in the relatively insular U.S. market. “It’s often good for an outside pair of eyes to come into the culture and spot what’s unique about it,” he suggests. Actually, during his tenure as Volvo’s chief of design, Horbury did spend some time in the U.S. at that automaker’s California styling studios. —TCC Team 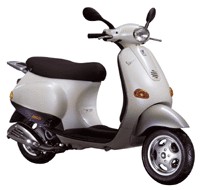 You don't have to get divorced, flee to Italy, and buy and restore a villa to enjoy the kind of freedom and romance Diane Lane discovers in Under the Tuscan Sun. No, for one-one hundredth the price of an Italian villa, you can save your marriage, save your 401K, and enjoy some Italian-style freedom by buying a Vespa. The scooter - that old-fashioned form of two-wheeled transportation - is back in fashion in the States. And no scooter is more fashionable than the one that started it all, the Vespa.

Vespa: City-Mobile, Italian Style by Carol Traeger (12/1/2003)
Who needs drama expense when you can get the essence of Italy for about $3000?

Mike J. Jackson, Chairman and Chief Executive Officer of AutoNation, Inc. (NYSE: AN), has been named the Automotive Hall of Fame's Industry Leader of the Year for 2003.

The world's premier clean vehicle event, Challenge Bibendum, will make its debut in Asia in 2004 in Shanghai, China. Organized by Michelin, the world's tire technology leader, the event promotes progress in the development of environmentally friendly vehicles and is an increasingly popular platform for car manufacturers to demonstrate state-of-the-art technologies in this field.