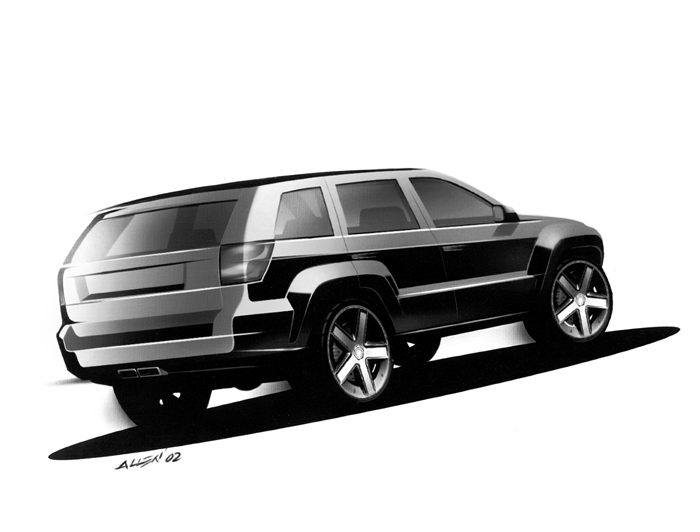 Chrysler Group, struggling under the weight of a stalled restructuring plan, divulged its full lineup of calendar-year 2004 new product launches along with several features and pricing details. Chrysler CEO Dieter Zetche has been on a multi-city tour talking up the new products to dealers. Zetche said he has upped the marketing budget for nine new products by $250 million from his original budget, though he declined to say what that was. Following this month's launch of the Dodge Durango SUV, the company will rollout: The SRT10 Ram pickup in January; PT Cruiser convertible in March; Wrangler Unlimited (long wheelbase) and Chrysler 300C in April; Dodge Magnum and Chrysler Crossfire SRT6 in May; Dakota pickup and Crossfire Roadster in September; Jeep Liberty refresh and all-new Grand Cherokee in November.

Some of the details:

-The Wrangler Unlimited is 15 inches longer than the standard Wrangler, with 12 inches behind the second seat for added cargo. The longer wheelbase, says Chrysler COO Wolfgang Bernhard, gives the Wrangler "much better road manners, less hop, but with no loss of off-road capability." The Unlimited also comes with a "Sunrise" soft top, which allows the front of the ragtop to be peeled back without removing the whole canvas.

-The 2005 Jeep Grand Cherokee is an evolutionary design, with a longer and wider wheelbase, and easier egress through the doors. It also comes with a 5.7-liter Hemi engine. There is no third-row seat option. But Chrysler plans to launch a third-row seat SUV based off the Grand Cherokee in 2005 as a 2006 model, according to USA Today.

-A refreshed Jeep Liberty will more clearly differentiate the Liberty from the Renegade, a difference so far only seen in the addition of a light bar on top of the current Renegade. The 2005 Renegade has wheel-flare guards, skid plates, a heavier duty luggage rack and a lightbar, lamp covers, as well as a differentiated front-end from the standard Liberty.

-The Crossfire SRT-6 will pump 330 horsepower and go zero to 60 mph in just over five seconds. In a video Chrysler showed, the Crossfire SRT-6 bested the Porsche Boxster. The two-seat convertible Roadster edition will follow.

-The SRT-10 Ram achieves zero 60 mph in just over five seconds, pumps out 500 horsepower and 525 pound-feet of torque.

-Chrysler has scuttled any plans to produce the Jeep Scrambler, a Wrangler derivative that would have had a small pickup bed. "There wasn't a good business case for it," said Zetsche.

-Debuting at the North American International Show in January will be two concept vehicles. The Dodge Sling Shot is a curious two-plus-one seating design. It has a three-cylinder engine that produces 95 horsepower, and gets 45 miles per gallon. It's hard to know what this concept could lead to. It seemed to be in the class of Mercedes-Benz's original Smart car.

The other concept was the Jeep Rescue, an obvious attempt at answering the Hummer H2 with a huge Wrangler. Chrysler intends to answer Hummer's expected H3 SUV with a Wrangler-inspired SUV within a few years. And it is working out a business case for an entry-level Jeep to be priced below $20,000.

-Chrysler will also show a redeveloped minivan at the NAIAS, which will allow both the second and third rows of seats to fold flat to create a wide-open cargo area without removing the seats.

-Another highlight of the Chrysler showcase was the emphasis on proliferating the 5.7-liter Hemi V-8 in as many vehicles as possible. The Chrysler 300C, Dodge Magnum, Dodge Durango and Jeep Grand Cherokee are all getting the Hemi. "Hemi has quickly become a sub-brand that people are willing to pay for," says sales and marketing chief Joe Eberhard. He expects Hemi-equipped 300Cs and Magnums to account for as much as 40 percent of sales volume or more.