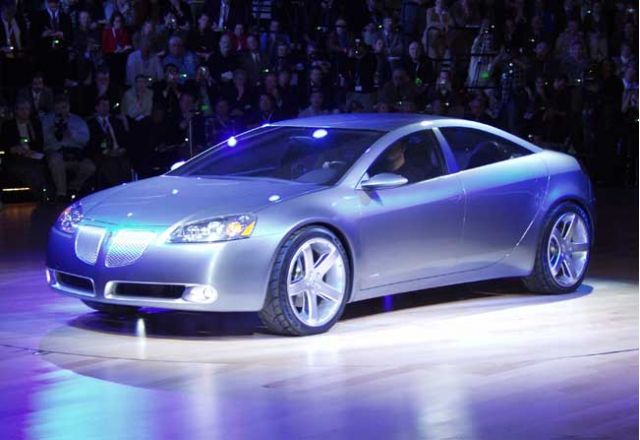 The new mid-size Pontiac that replaces the Grand Am in 2005 will be called the G6, according to General Motors. "It is so new and different from the Grand Am that it demands a name that is equally new,” said Lynn Myers, Pontiac-GMC general manager in a release. The G6 is based on the Epsilon platform shared by the Saab 9-3, and shares the name of the concept car shown here (and shown at this year’s Detroit auto show). The production version bows with V-6 power at January’s Detroit show. Also, Pontiac says the replacement for its Montana minivan will be dubbed Montana SV6, for “sport van V-6.” The Montana will be shown early next year.

Spy Shots: ’05 Pontiac Grand Am by Brenda Priddy (9/1/2003)
A concept lookalike barreling ahead into production.

DaimlerChrysler To Build E-Class in China

DaimlerChrysler has penned an agreement with its Chinese automotive partner Beijing Automotive Industries Holding Corp. to begin building 25,000 E-Class and C-Class cars in China each year. The company has sold its Jeep Cherokees in China, but the new deal will allow it to move into the lucrative, booming Chinese luxury market. DaimlerChrysler will spend more than a billion to expand its existing production facility with Beijing Jeep Corp. to accommodate the production.
Spy Shots: ’05 Hyundai Crossover 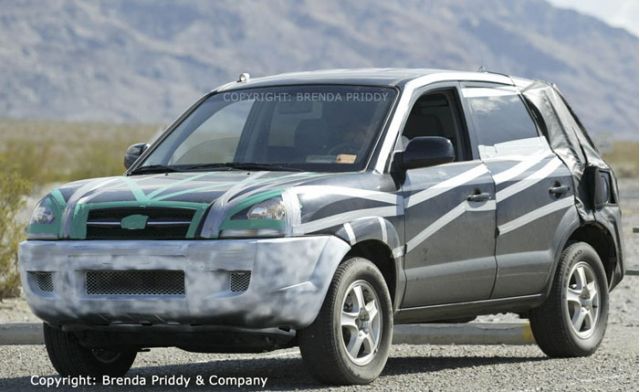 Often misidentified as the next Kia Sportage (or its replacement), these photos are actually of the upcoming Elantra-based JM crossover. Smaller than the popular Santa Fe, the new JM is expected to be powered by a 2.0-liter four, with an optional 2.7-liter V-6 available as an option. Front-wheel drive will be standard, with an all-wheel-drive option available. See more inside TCC today: 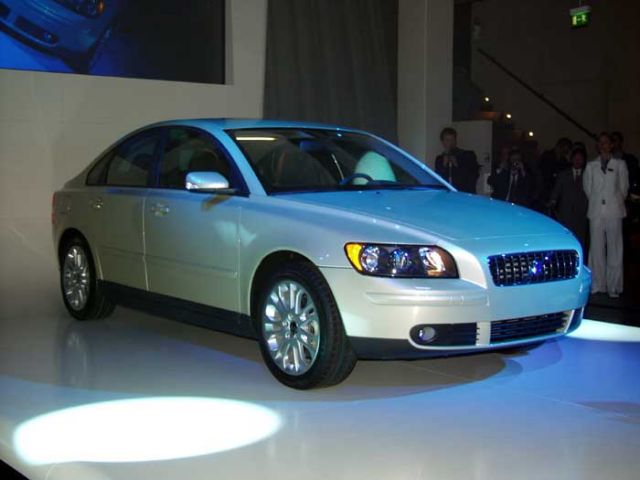 Despite its diminutive dimensions, almost two inches shorter than the car it replaces, Volvo’s new S40 is a sedan for those who want more, declared the automaker’s CEO, Hans-Olov Olsson. “They don’t compromise much. They might go smaller, but they don’t want less.” The second-generation S40 shares the same “architecture,” meaning many of its basic components, with the new Mazda3, but Volvo’s offering will come loaded with plenty of premium features, from its integrated phone to stability control. Long known for its basic, boxy designs, the new subcompact boasts a surprisingly muscular and aggressive stance, clearly influenced by the successful XC90 crossover vehicle. The interior, meanwhile, has the sort of simple yet elegant feel of a B&O audio system, and boasts some interesting innovations, such as the Aqua Ice interior option, which features a lightly tinted clear plastic skin over the center stack allowing you to see the electro-mechanical guts of the climate and audio systems. “If you want to be innovative, there’s no use looking at what the competition is doing,” designer Henrik Otto explained, during a preview of what’s to come at the Frankfurt Motor Show. “You need to look at what they aren’t doing or using.” As one would expect from Volvo, the automaker promises the S40 will be at the top of its category in terms of safety. Among its design features: the use of four separate grades of steel to help manage crash load forces. Ultimately, expect a wide range of four- and five-cylinder engines, and a diesel. All-wheel drive will be added next year. The new S40 will start rolling into dealer showrooms late this year. Volvo hopes to sell around 70,000 a year, with a base price of 20,000 Euros.

The new Mazda3 sedan and five-door wagon will go on sale in Europe this month, then roll out in the U.S. and Japan. The “C-class” Mazda was designed to present a more up-market feel than its competitors, part of the automaker’s strategy to move out of the Japanese second tier. “Arguably, it may be the most important launch” of several recent products to come from Mazda, according to the automaker’s global product development chief, Joe Bakaj. The U.S. introduction is scheduled for late November or early December, and once it hits stride, Mazda is hoping the new car will generate at least 70,000 sales annually. The Mazda3 is yet another spin-off of Ford Motor Co.’s new global C1 platform, which is also being used for products like Ford European crossover vehicle, the C-Max, as well as the Volvo S40. But company officials stress that unlike past efforts to create common global platforms, their new “architecture” strategy permits them to sharply differentiate individual vehicles so that customers won’t even recognize they come from the same family.

Deep and unexpected losses at Ford’s European subsidiary have been an unwelcome setback to the troubled number two automaker, raising questions about the strategy behind Europe’s aggressive cost-cutting and product development. With the market in turmoil, tactics have to change, but the strategy will remain in place, according to David Thursfield, who serves multiple roles as Ford’s worldwide purchasing chief and European czar. Thursfield told TheCarConnection that Ford has largely tapped out the savings it can achieve by cutting fixed costs – and has no plans for further production cuts. But he believes there are savings still to be found through such things as platform sharing. The new C1 platform, used by products like the Volvo S40, Mazda3 and Ford C-Max provides a good example, helping cut development costs alone by “at least” ten percent, according to Thursfield. The blunt-talking executive insisted things should start turning around in the third quarter of 2003, and show “a substantial improvement in our performance in the fourth quarter.” While he declined to discuss specific targets, Thursfield suggested he “would be disappointed” if Ford of Europe wasn’t back in the black during the final three months of this year.

Ford's Leach Out In Europe by Jim Burt (8/18/2003)
Staggering losses lead to an unplanned departure.

DaimlerChrysler’s new mid-size models will eventually be offered in both rear- and all-wheel-drive configurations. General Motors is coming to Frankfurt with a similar new platform of its own. Can Ford be far behind? Maybe yes, maybe no. “We have to develop a global rear-drive architecture and we’re seriously looking at that,” said Thursfield, hinting such a product line would eventually become available in the U.S., as well as Europe and other parts of the world. But a well-placed source later suggested that comment wasn’t quite what it might seem, and that it’s less than certain Ford would bring rear-drive back to the States in any significant numbers. That seems to underscore an ongoing debate inside the company. There are more than a few in high levels who believe there might even be room for a modern version of the long-running, rear-drive platform now used for the Ford Crown Victoria, Mercury Grand Marquis, and Lincoln Town Car. But such studies have routinely been given the thumbs-down. One thing definitely is certain, stressed Thursfield: there’s no place for a Crown Vic outside the U.S. “I don’t think you can have a (global) body-on-frame platform.” 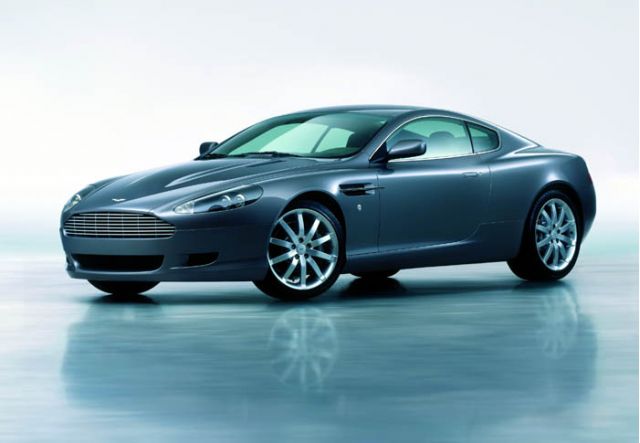 They call it “the most exclusive club in the world,” and they mean by that that Aston Martin buyers are among the most discriminating motorists of them all, willing to wait for a near-bespoke automobile that will thrill them and make the neighbors crazy with envy.

After nearly 90 years in business, and a long alliance with parent company Ford, Aston Martin will use the Frankfurt Auto Show to introduce the all-new DB9 coupe, a car that makes a complete and clean break with the storied past of this great old marque. Aston Martin’s German managing director, ex-Porsche engineer Dr. Ulrich Bez, says that the DB9 is the key to the copmpany’s future expansion, “a sports car with GT levels of comfort and cruising ability, a car you can drive from London to the south of France.”

The DB9 coupe, which will be built at Aston Martin’s brand new plant in Gaydon, Warwickshire, England, uses a combination of composite fenders and decklid, an all-aluminum body and hood and an aluminum frame that is a combination of castings, stampings, extrusions, and weldments put together with huge fasteners, adhesives, and ultrasonic welding. Aston Martin is the first car company in the world to use the ultrasonic welding process, which yields no heat, and uses only five percent of the energy needed by conventional electric welders. It is by far the stiffest, strongest and lightest Aston Martin sports car ever built, coming in at a mere 1710 kilograms or 3762 pounds. While the DB9 is 25 percent lighter than the outgoing DB7 coupe, it is twice as stiff and strong.

The new DB9, which takes the place of the DB7, due to go out of production at the end of 2003, will be Aston Martin’s volume car, and will enable the company to stretch its total annual volume north of 5000 units, about as many F-150s as Ford makes on one shift.

The DB9 will be powered by an evolutionary version of the Aston Martin double-overhead-cam 48-valve V-12 engine, which itself started out as two Ford 3.0-liter V-6 engines welded together. In the DB9, it will be rated at 450 horsepower at 6000 rpm and 420 pound-feet of torque at 5000 rpm. While this figure pales in comparison to some of the engines available from the DB9’s prime competitor, the Mercedes-Benz CL coupe, the DB9 is about a thousand pounds lighter than the Mercedes. Aston Martin says the six-speed manual will do 0-60 mph in 4.9 seconds, and the automatic will do the same run in 5.1 seconds.

In either case, the transmissions of the DB9 are mounted at the rear of the car, driven by a carbon fiber driveshaft mounted inside a hugely strong and stiff aluminum torque tube that acts as the structural backbone of the car. The ZF six-speed automatic is completely drive-by-wire and thus has no conventional shifter, operated by PRND buttons in the dashboard, with shifter paddles on the steering wheel. Mounting the transmissions at the differential yields the perfect 50/50 front/rear weight distribution for race-car handling prowess.

Designed by Danish master designer Henrik Fisker, the DB9 has a minimum of panels and joints in the exterior, and no separate front bumper. It is designed to reflect all of the time-honored DB design cues dating back to the DB2 of the 1950s, and it is a stunner. The interior features Bridge of Weir leather in 20 colors and three different woods, walnut, mahogany, and the particularly adventurous bamboo.