General Motors, Chrysler, and Honda were among the automakers reporting shutdowns of assembly plants in the wake of a blackout that struck parts of the Northeast and Midwest late Thursday afternoon. GM told Reuters Thursday afternoon that most of its plants in Michigan had been affected; Chrysler Group told the news agency all but its St. Louis plants were shut down as a result of the largest blackout in U.S. history. Power was returning to New York, New Jersey, parts of Ohio, Michigan, and Ontario by early evening; early reports peg the problem as the result of a fire at a ConEdison plant in New York. 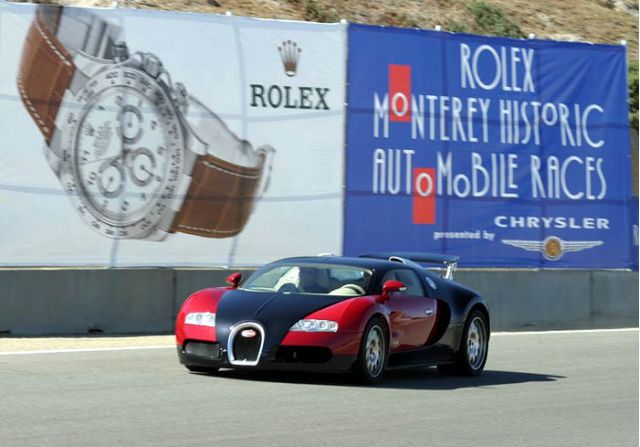 Bugatti has finally shown the first production car in its new, Volkswagen-owned iteration. The Veyron 16.4, with a 16-cylinder engine forged from two W8s, ambled around Laguna Seca Raceway on Thursday as it prepared for its world introduction at the Rolex Monterey Historic races on Saturday. The Veyron 16.4 has four turbochargers and makes 1001 horsepower at 6000 rpm. VW hasn’t released production estimates or prices.

Buick is replacing its mainstay Regal in 2005 — and when it does the new vehicle will get a new, old-fashioned name. The LaCrosse will replace the Regal, according to Automotive News, because GM execs think the new name will better reflect the new car’s vast differences from the older model. AN adds that Buick dealers have been informed of the decision to rebrand the popular mid-size sedan.

Oldsmobile’s formal ‘last rites’ are less than a year away now. Production of the last Olds Alero, Bravada and Silhouette models will phase out on yet-unspecified dates during the 2004 model year, says Automotive News. Winding down the 107-year-old brand has taken nearly four years to complete, since its demise was first announced by GM CEO G. Richard Wagoner, Jr. in December, 2000.

Seeking to keep Olds owners in the GM fold, the number-one automaker has offered “loyalty” spiffs of $1500 for owners buying another Oldsmobile and $1000 for those buying another GM brand. Approximately half of Olds owners have stayed with GM, of which about one-fifth have gone to Chevrolet, one out of ten have stayed true to Olds, and one out of twelve have switched to Buick. In January, 2001, some 722,000 loyalty coupons were mailed to Olds owners. According to the Automotive News story, Darwin Clark, GM’s vice-president for industry-dealer affairs, and a former Olds general manager, says about 225,000 have been used, about 31.2 percent of those issued.

Headquartered for most of its life in Lansing, Mich., near the state capital, Oldsmobile introduced the automatic transmission and the “Rocket V-8” engine. Its founder, Ransom Eli Olds, gave his initials to the Reo truck line, also a vehicle of the past, when the company started up in 1897. —Mac Gordon