Connect with our dealer and finance partners through our site and ask for details regarding their at-home car buying services.
OK
HomeNewsPaint

Mercedes-Benz’ plan to sell the Golf-sized A-Class in the U.S. have been scuttled. Automotive News confirms reports from Benz insiders to TCC that the brand’s base model in the U.S. will instead be a sport tourer based on the A-Class platform, and sold under the CST badge. The CST, the industry weekly reports, arrives in 2005 and will resemble the GST — a new six-passenger sport tourer also due in 2005 and to be built alongside the M-Class SUV in Vance, Ala. AN adds that Benz hopes to price its CST class under $30,000.

Aviator to Fly Away? 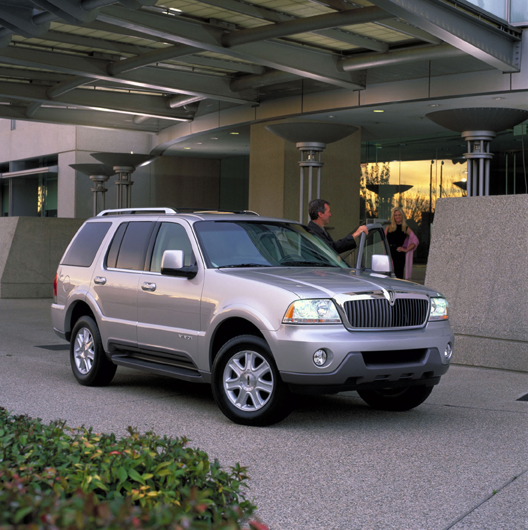 Automotive News also reports this week that Lincoln will drop the slow-selling Aviator SUV, possibly as early as 2005. Where Lincoln had hoped to sell as many as 35,000 Aviators a year, they’re selling somewhat short of the rate. Just 15,164 have gone out the door through July of 2003, AN reports. Dealers have blamed the vehicle’s high sticker price and its looks, which blend the larger Navigator with the downmarket Explorer on which the Aviator is based. The weekly adds that Lincoln will replace the current Aviator with a car-based sport wagon built from the Mazda6 platform as a 2007 model. The Lincoln car-ute is expected to be built in Canada.

Lincoln Won’t Follow Caddy Upscale by Joseph Szczesny (2/17/2003)
Ford isn’t sure which direction Lincoln is headed — except it’s not chasing Cadillac into the stratosphere.

The American brands spent an average of $4000 in incentives for every vehicle they sold in the U.S. in July, according to a new study from Autodata. The industry researchers found that General Motors leads the U.S. automakers in offering $4253 per vehicle last month, up 37 percent from last year; Chrysler gave back $3846 per vehicle and Ford, $3687. Each of the American automakers lost share in July, although representatives of each expressed optimism that sales would improve along with the economy. In total, the American brands held just less than 60 percent of the U.S. auto market in July, down more than 1.6 percent in a year.

CVTs Hit Their Stride by Bengt Halvorson (8/4/2003)
No longer just a tech curiosity, the new generation of shiftless transmissions offers a real alternative to conventional automatics.

Riding with the Boys of HUMMER 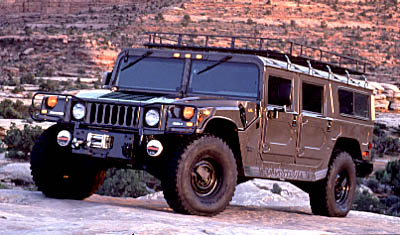 What a disaster. Apparently it wasn’t enough that Jerry spent a precarious lunch hour groping underneath a three-and-a-half-ton Hummer H1 to repair a broken rear half-shaft that was splintered by an aggressive boulder. Then this guy Ron goes and pretzel-bends two tie rods on his unwisely modified Hummer H2, stranding sixteen or so trail junkies until you-know-who — that’s right, Jerry again — can make the necessary field repairs. All in all, a fantastic day of max-adrenaline off-roading according to the general consensus. For members of The Hummer Club, who gathered in the East Tennessee mountains overlooking Oak Ridge for their recent Windrock Trails 2003 event, “hitting the trail” is a commandment they take literally. Ride along with them inside TCC today:

Riding With The Boys of HUMMER by Marc K. Stengel (8/4/2003)
Hummer enthusiasts go out of their way to reach the unreachable.

NEWS FROM THE 2003 MANAGEMENT BRIEFING SEMINARS

Chrysler intends to reduce capital spending by “30 percent-plus” when it retools for future model changes, said Craig Corrington, the automaker’s senior vice president in charge of assembly operations. During a discussion following his speech at the 2003 Management Briefing Seminars, Corrington said that’s a critical step in Chrysler’s turnaround, but only one part of its drive to get leaner and more flexible.

Among other things, it will require Chrysler plants to become more flexible, producing a larger number of distinct models and variants in each plant. But that will permit the automaker to adapt to shifts in market demand without having to idle a plant. A small step comes with the launch of the next-generation Dodge Durango in Newark, Delaware. Instead of stopping the line, Chrysler will stage a rolling changeover to the new truck. But by comparison, the best of the Asian automakers routinely produce a wide variety of products on a single line, a capability that Corrington admitted will take Chrysler several more years to achieve. Eventually, he said, “We’re zeroing in on three to four platforms” in a plant.

Manufacturing operations can’t do it alone, he cautioned. It also requires design and engineering to develop more robust products that are easier to build. Indeed, every department within the company has been given a target, based on the influential Harbour Report, a widely-quoted arbiter of manufacturing efficiency. Though Chrysler remains the least efficient of the Big Three and well behind its Asian “transplant” rivals, the U.S. arm of DaimlerChrysler posted a significant, 8.3 percent improvement in productivity according to the latest Harbour Report. And it hopes to maintain at least a 5 percent annual increase going forward. If that happens, Corrington confidently predicted, it is “only a question of when we’ll intersect,” and even exceed, the productivity of the best competitors.

Chrysler will get a chance to prove itself in 2004, when it rolls out nine new products, all of which could help yield some gains in efficiency.

Chrysler’s efficiency drive can’t be achieved in a vacuum, stressed Corrington, who recently assumed responsibility for all assembly operations, along with oversight of stamping and component operations. “Suppliers will have to be in lockstep with us,” he said. And among other things, Chrysler is studying some potentially radical changes, such as having key suppliers produce modular components alongside the assembly plant. That’s one of the steps Nissan has taken with its new plant in Canton, Mississippi.

That would require the approval of the United Autoworkers Union, however. But so will a number of other steps that could make Chrysler more competitive, Corrington emphasized. So the current round of labor talks are critical to the automaker’s future. While he declined to discuss specific company demands, Corrington said the UAW does seem to “understand the gap we’re trying to close with the competition.” The proof will come in a matter of months. The union expects to wrap up negotiations with the Big Three on Sept. 14th. —TCC Team

“It’s easy for us to expand capacity to 500,000” at the new Canton, Mississippi, assembly plant, Nissan’s Executive Vice President Tadao Takehashi told TheCarConnection.com. But the board member in charge of manufacturing stressed that the Asian automaker has “no plans in place and first wants to see how the market reacts to new Mississippi-made products, such as the Titan pickup. “Nissan suffered the problem of over-capacity in the ‘90s, and we don’t want to repeat that,” he stressed. But based on how U.S. consumers have taken to other new Nissan vehicles lately, many industry analysts believe an expansion at Canton is only a matter of time.

The Canton plant is currently Nissan’s most advanced, though not its most efficient. In the U.S., the factory in Smyrna, Tennessee, holds that honor, according to the moment, though Takehashi smiles at the idea of the two plants competing in the future. Canton will be used as something of a blueprint for future Nissan plants, such as the joint venture assembly line it will open in Guangzhou, China, next year. Each Nissan facility reflects local needs and improved technology and processes. But one thing they have in common is flexibility. The Kyushu, Japan, plant is a good example, rolling nine different models off its two lines. That is “key,” the Nissan board member said, to surviving the increasing fragmentation of the global auto industry.

Suppliers play a critical role in Nissan’s manufacturing operations. The products built at Canton, for example, rely on built-up modules – as many as nine for each of some of the vehicles, such as the full-size Armada SUV. And some of those components are being produced right within the Canton plant’s walls by key suppliers. At the same time, Takehashi cautioned, “suppliers are the most difficult part” in maintaining plant flexibility. They must be notified in advance should the automaker decide to shift the production mix at one of its plants. That could conceivably take several months, though in most cases, suppliers can adjust their own parts flows within a matter of days.

Asked how Nissan decides on the best model mix, Takehashi said dealer inventories are the “barometer” of market demand. American makers typically like to have just above a 60-day supply of unsold vehicles in stock, while some Asian marques, like Toyota, are happy with half that. For its part, Takehashi said Nissan shoots for a 52 or 53-day supply on most of its products. —TCC Team

A new, high-tech paint process should reduce by 25 percent the level of emissions from the paint plant at Chrysler’s Newark Assembly Plant. Automakers have been under pressure to abandon the classic, solvent-based paint process because it generates significant amounts of hydrocarbon emissions. But alternatives, such as water-based and solid paints don’t always produce acceptable alternatives. So Chrysler turned to DuPont, its paint supplier, to come up with a way to reduce solvent emissions when the Newark plant begins building the second-generation Dodge Durango later this year. The supplier turned to molecular engineering technology to develop so-called Super Solids paint. This sharply reduces the amount of solvents needed in the paint itself, and that, in turn, reduces the amount that might get into the air. —TCC Team

Toyota Motor Sales (TMS), U.S.A., Inc., announced manufacturer's suggested retail prices (MSRP) today for the 2004 Camry mid-size sedan, Avalon full-size sedan and Corolla S compact sedan models. Camry and Avalon will be available at dealerships beginning mid-August. The 2004 Corolla S is in Toyota dealerships now. Camry will receive a new 3.3-liter V6 engine for the sportier SE model, which will increase horsepower by 15 to 225 hp and boost torque by 20 lb.-ft, to 240. The Camry SE will carry an MSRP of $23,315, an increase of $50, or 1.0 percent. The Camry LE and XLE grades remain relatively unchanged from the previous model year, maintaining their excellent value with no price increase for 2004. Camry four-cylinder models range in price from $19,045 for the LE with a manual transmission to $22,295 for the XLE automatic. Models with the 3.0-liter V6 range in price from $22,260 for the LE grade to $25,405 for the premium XLE grade. Toyota Avalon pricing will start at $26,045 for the XL grade with bucket seats and $26,865 for bench seat models, each receiving a minimal increase of $100, or 1.0 percent. The premium Avalon XLS grade will carry an MSRP of $30,505 for models with bucket seats and $30,405 for those equipped with a bench seat. The sporty Corolla S grade will receive a minimal price increase of $100, or 1.0 percent. This adjustment will be effective with September production.